1929: The Great Crash and the Great Depression

Here's an Example of Things Getting Weird Indeed: In the United States the fall of 1929 saw the biggest stock market crash ever. It was the start of a prolonged period of decline that carried the values of stocks—shares of ownership of and thus both claims on the profits of and authority over the operations of America's companies—down by 1932 to less than one fifth of their 1929 peak: 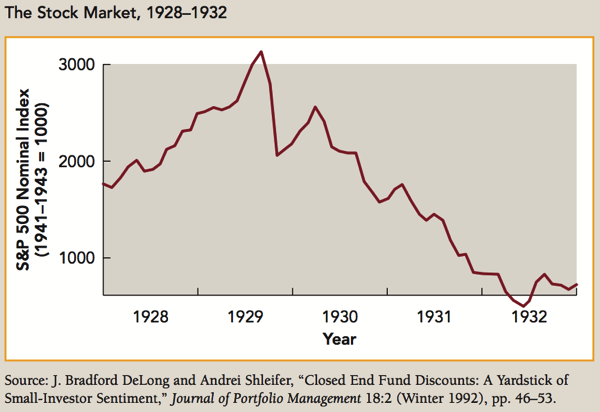 The crash changed what Americans expected about the future of the economy, and the shifts in spending caused by their changed expectations played a key role in causing the greatest eco- nomic depression in American history, the Great Depression. On October 29, 1929, the price of shares traded on the New York Stock Exchange suffered their largest one-day percentage drop in history. Stock values bounced back a bit initially, but by the end of the week they were down by more than a quarter. Gloom fell over Wall Street. Many rich people had lost a lot of money.

At that time stock ownership was confined to the rich. Middle-class Americans owned little stock. Nonetheless, the crash affected nearly everyone's perceptions of the economy: Bad times were coming.

You can probably guess what happened in the months after the crash. Most people simply stopped buying big-ticket items like cars and furniture. This massive drop in demand reduced new orders for goods. The drop in output generated layoffs in many industries. Even though most people’s incomes had not yet changed, their expectations of their future income had.

Many economists talked—and some still talk—about how the high stock market values of 1928-1929 were "irrational", how there had to be a crash, and how the Great Depression was the result not of the shift of expectations that followed the crash—a shift could have been avoided if the crash had been avoided—but rather of the fact that stock market values were elevated in 1928-1929. The British economist John Maynard Keynes argued strongly against this point of view. "While some part of the investment", he said:

which was going on... was doubtless ill judged and unfruitful, there can, I think, be no doubt that the world was enormously enriched by the constructions of the quinquennium from 1925 to 1929; its wealth increased in these five years by as much as in any other ten or twenty years of its history.... Some austere and puritanical souls regard [the current Great Depression] both as an inevitable and a desirable nemesis on so much overexpansion, as they call it; a nemesis on man’s speculative spirit. It would, they feel, be a victory for the mammon of unrighteousness if so much prosperity was not subsequently balanced by universal bankruptcy. We need, they say, what they politely call a ‘prolonged liquidation’ to put us right. The liquidation, they tell us, is not yet complete. But in time it will be. And when sufficient time has elapsed for the completion of the liquidation, all will be well with us again...

They were, Keynes judged, completely wrong:

Doubtless, as was inevitable in a period of such rapid changes, the rate of growth of some individual commodities could not always be in just the appropriate relation to that of others. But, on the whole, I see little sign of any serious want of balance such as is alleged by some authorities. The rates of growth [of different sectors]…seem to me, looking back, to have been in as good a balance as one could have expected them to be. A few more quinquennia of equal activity might, indeed, have brought us near to the economic Eldorado where all our reasonable economic needs would be satisfied.

It seems an extraordinary imbecility that this wonderful outburst of productive energy [over 1925–29] should be the prelude to impoverishment and depression.... I find the explanation of the current business losses, of the reduction in output, and of the unemployment which necessarily ensues on this not in the high level of investment which was proceeding up to the spring of 1929, but in the subsequent cessation of this investment. I see no hope of a recovery except in a revival of the high level of investment. And I do not understand how universal bankruptcy can do any good or bring us nearer to prosperity...

In Keynes's view—and in mine, and in the view of the greater and wiser part of economists who have taken a serious look at the origins of the Great Depression—you can say that American stock prices at the end of 1929 and through the fall of 1929 were in a "bubble": so high that it is hard to see how rational and reasonable people could have thought it would pay to buy stocks and then simply hold them and collect the dividends that would flow from them, even in a continued boom. But the fall of stock prices below their start-of-1928 values could itself be rationalized only as a reaction to a forthcoming depression.

As I said: when expectations of the future matter for what happens in the present, things get weird. They get weird indeed.