Thus for all intents and purposes the federal budget this past fiscal year has been in balance. There are plausible technical adjustments and corrections to the budget (for example, improving the treatment of government investment; or adjusting interest payments for inflation) that would have put the federal budget in arithmetic surplus for the fiscal year past. There are also plausible technical adjustments and corrections that would have put the government further into deficit (for example, removing the Social Security and Medicare trust funds from the books). "Balance" is a somewhat fuzzy concept.

In the summer of 1997 the President and the Congressional leadership announced that they had reached an important, "historic" deficit-reduction agreement--an agreement that carried to completion the process of balancing the budget that had begun with the bipartisan 1990 deficit reduction (and congressional procedures reform) program and the Democratic 1993 deficit reduction program. But there turned out to be a vast disproportion between the 1997 and the other programs in the amount of deficit reduction claimed. The 1990 and 1993 deficit-reduction agreements appeared to be between six and eight times as large in the relative size of their effects on the economy. 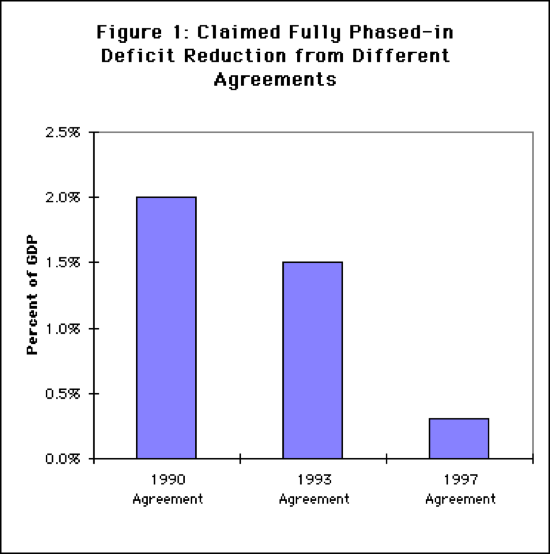 The reason for the small relative size of the 1997 deficit-reduction agreement is that, given the course of the American economy, there was simply not that much deficit left to reduce. Thus both the president and the congress turned most of their attention to other matters--the congress to capital gains tax relief, and the president to safeguarding a few remaining public investment priorities. The focus on the bottom line of massive long-run deficit reduction that had been at the center of the other two agreements was simply absent. It seemed, instead, a return to an earlier era of budgetary politics. 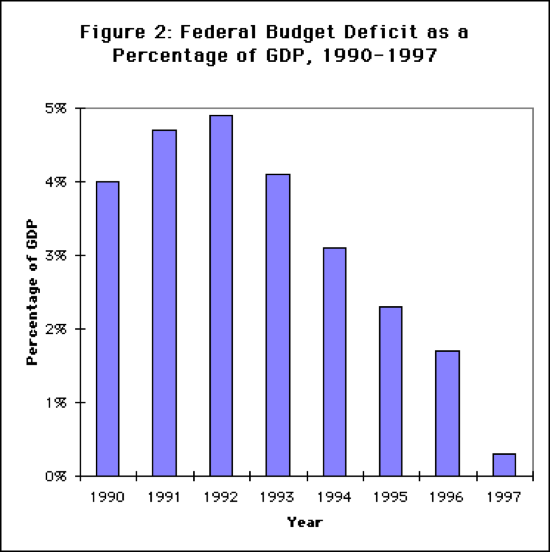 In 1992 the federal government budget deficit had amounted to 4.7% of national product--some fifteen times as large in relative size as the 0.3% of GDP deficit of fiscal 1997. Of the improvement, about half is due to the policies enacted in the 1990 and 1993 agreements: increases in taxes, and reductions in spending--or, rather, reductions in spending growth below the growth rate of the economy as a whole (for as the population and the economy grow, the amount of money the government needs to fulfill a given set of programmatic missions grows roughly as fast: twice as many people need twice as many courts, twice as many airplane flights need twice as many air traffic controllers).

That all of these potential disruptions to recovery have been avoided is due in large part to luck, but also in large part to skill--to the successful formulation and implementation of economic policies. Given how often the Federal Reserve, the Congress, and the President are blamed for inappropriate or faulty monetary and fiscal policies, it is worth pausing to note that in this decade (so far) they appear to have gotten things exactly right. They deserve credit for managing to chart an economic policy path that has successfully reduced the deficit without generating renewed recession.

Level Three: The end of the era of deficits

Back in 1981 the Reagan administration and its Congressional supporters made a huge mistake in its budgetary policy, a mistake which gave the United States some fifteen years of unprecedented peacetime budget deficits. 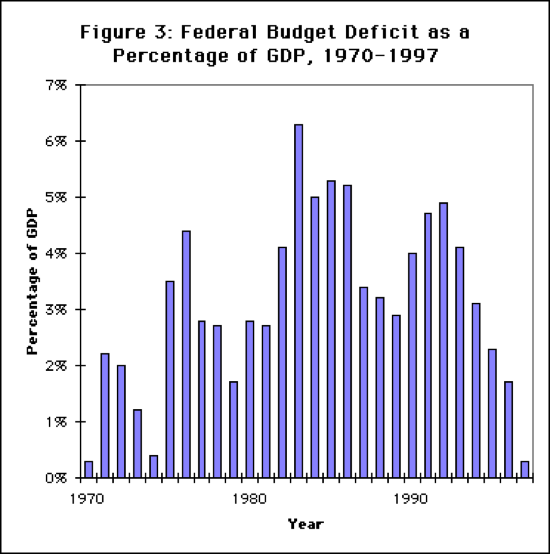 It is hard today to understand exactly what those making fiscal policy for the Reagan administration were thinking of, and thus it is hard to understand how this mistake could have been made. Certainly no one intended to create large budget deficits that for fifteen years would drain the pool of capital for investment and retard the growth of the American economy. Those who developed the fiscal policies of the Reagan administration have for fifteen years argued over who made the key mistakes, and over just what the key mistakes were.

That the deficits of the 1980s and the 1990s were economic policy mistakes no one disputes. By absorbing capital that would otherwise have funded private investment, the deficits left the U.S. with a lower capital stock, a less productive economy, and a debt owed to overseas investors that must now be amortized.

How destructive were these deficits? Different assumptions about the structure of the U.S. economy and different methodologies lead to different results. The range of estimates runs between roughly $1000 and roughly $3,500 in lost annual productivity and income for the average American worker, or between 1.5% and 5.0% in lost annual GDP.

The hoped-for end of the era of big deficits means that this sum--the total drag on the economy inflicted by the cumulative budget deficits--is no longer growing. Ground lost in the 1980s and 1990s has not been made up. But additional ground is no longer being lost. And that is cause for some celebration.

Level Four: The Finances of the Social Insurance State

The United States government budget will be in rough balance for the next decade or so. But further into the future the fiscal outlook becomes bleak once again. The government's analytical agencies--the Social Security Administration, the Office of Management and Budget, and the Congressional Budget Office--are projecting renewed and growing budget deficits beginning late in the next decade.

The are projecting renewed deficits because the United States today has a social insurance system, a Medicare and Social Security system, that was designed back in the 1970s for an economy that would be growing at a measured average rate of 2.5 percent per person per year.

Thus the taxes that have been earmarked to pay for Social Security and Medicare as the U.S. population ages and the baby-boom generation approaches retirement are not going to cover the costs of providing currently-promised benefits for far into the next century. At some point before the baby-boom generation reaches retirement age, the United States as a country will have to decide either to cut Social Security and Medicare benefits below levels that have been implicitly and explicitly promised, or to raise social insurance taxes. The sooner the American political system make this choice, the easier the process of adjustment will be. The longer that the choice is delayed, the more disruptive and difficult will be the process of transition and adjustment to a sustainable social insurance system.

Thus the attainment of an extremely low budget deficit of $24 billion--a federal budget in substantive balance--in fiscal 1997 can be interpreted in four different ways, depending on how deep and how long-run a look one wishes to make. At the shallowest level the 1997 budget and deficit-reduction agreement marks a return to a politics-as-usual in which the magnitude of the deficit is no longer of the highest concern. At a second level it marks a remarkable success of economic policy, as the deficit has been eliminated over the past five years without triggering recession. At a third, deeper level it marks the end of the era in which large budget deficits did substantial harm to American economic growth. And at a fourth, deepest level it should not blind us to the fact that all is not well with America's long-run fiscal policy because of the unresolved funding crisis of the social insurance system.