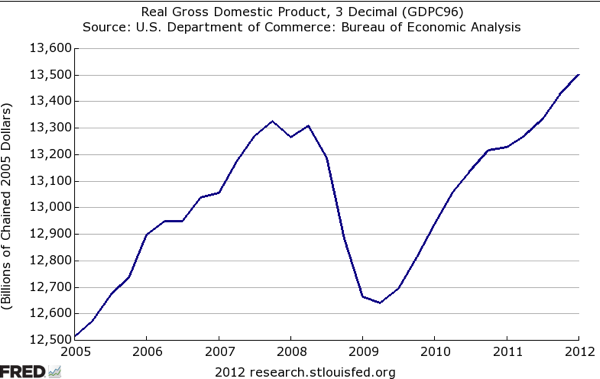 mainly macro: When I first studied macro, it was all about ‘schools of thought’. Keynesians, Monetarists, New Classicals, and probably many more I cannot remember. Macroeconomists tended to take sides. Antagonists often talked across each other, and anyone not already on one side just got totally confused. I recall reading one textbook on international macro where each chapter represented an alternative ‘view’, with no clear idea of how each view or school was related to another. One thing that was pretty clear, however, was that most schools of thought could be identified with a particular ideological position.

But then things began to change. The discipline appeared to become much more unified.

It would be going much too far to suggest that there was a general consensus, but to use a tired cliché, most macroeconomists started talking the same language, even if they were not saying the same thing…. [E]ven as recently as five years ago, I told masters students starting a macro course to forget anything they might have been told about alternative schools of thought: they were going to learn a unified framework that most macroeconomists – the mainstream – would sign up to. It was like the first half of David Romer’s popular textbook: start with Solow, but quickly replace a fixed savings propensity by an optimising intertemporal consumer to get the basic Ramsey model. Add endogenous labour supply to get RBC. Probably talk a bit about overlapping generations. Hopefully add to what was in Romer by doing some open economy stuff. Then add New Keynesian theory built around sticky prices. If the student went on to work in a central bank, they would probably encounter this framework as a central part of that institution’s forecasting and policy analysis.

I think this synthesis and the reasons behind it may have had one or two unintended and unfortunate consequences. Sometimes the emphasis on microfoundations became a bit of a fetish…. [T]oo much time was devoted to elements that were easy to model within that framework rather than the things that really mattered….

Just five years later and it seems rather different…. Since the recession it has become clear that the synthesis had not been adopted everywhere. In particular, in sections of the profession there remained a suspicion (to put it mildly) of New Keynesian theory, and partly as a consequence of this the amount of this theory that was taught to graduates differed widely….

School of thought thinking also tends to bracket ways of looking at the economy with policy prescriptions…. [I]t leads people to take sides on issues not because of the merits of the case, but because that case is associated with a school of thought whose other elements they do or do not like. I also miss the synthesis. I very much liked the idea that disagreements could be clearly located within a common framework. With the synthesis, I felt macroeconomics began to look more like a unified discipline - more like micro, and dare I say it, more like a science than a belief system.