In the Words of Christina Romer: "We Are So Scr*&@d": Labor-Force Participation and Structural Unemployment Blogging 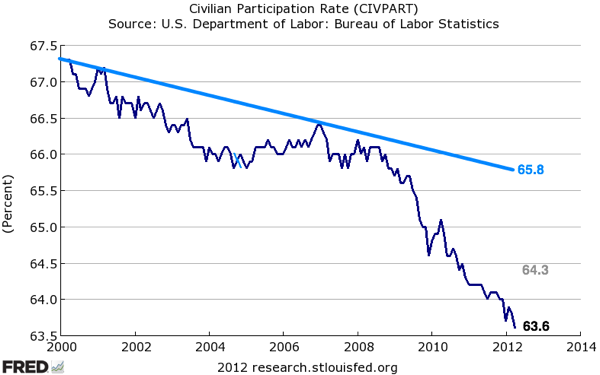 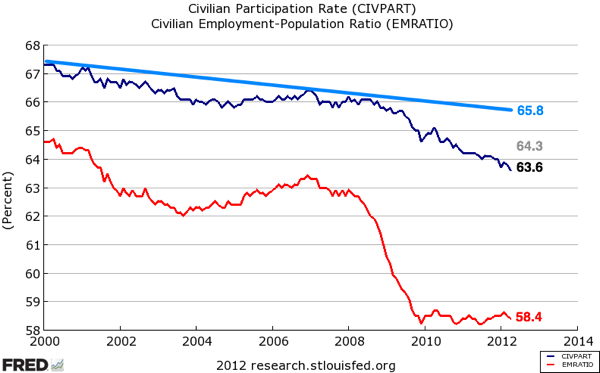 A straight-line extrapolation from the 2000 through the 2007 business-cycle peaks says that "natural" labor-force participation today is 66.8% of the adult population. Bumping that up by 0.2% points because comparing the 2000 to 2007 peak overstates the demographic decline and bumping it up a further 0.2% points for decreased desired early retirement as a consequence of the vanishing of $8 trillion in home equity values would give us a current "natural" labor-force participation rate of 67.2%. But let's take 66.8%-67.2% as our range.

That is a gap of 0.7%-1.1% points of the adult population: people who really ought to be in the labor force right now, but who are not. Are they now part of the "structurally" non-employed who we will never see back at work, barring a high-pressure economy of a kind we see at most once in a generation? Probably.

The incredible shrinking labor force - The Washington Post: [W]hile part of the story is clearly that the labor force is shrinking because the bad economy is driving workers out, another significant factor is that baby boomers are beginning to retire early — a trend that has worrying implications for future growth….

TIt’s easy to see why some workers would, in the current environment, get discouraged and stop looking for work altogether. There are about 3.7 job seekers for every available opening. “We’re not going to see the labor force tick back up until there are enough opportunities that the people who enter aren’t faced with months of fruitless job searches,” said Heidi Shierholz, an economist at the Economic Policy Institute. Once the economy improves, the theory goes, more workers will start searching for jobs and the unemployment rate will go back up.

The more worrying possibility is that workers discouraged by bleak job prospects will find themselves unable to return to the labor market even after it improves. About 41 percent of the unemployed have been out of work for more than 27 weeks, and economists have found that as workers remain jobless for extended periods of time, their skills erode, their work contacts move on, their motivation wanes and they have difficulty returning to the labor force when the economy picks back up. They move from being unemployed to being almost unemployable.

But a number of economists are arguing that the recession is distracting people from the real story — long-run demographic trends that have nothing to do with the current economy. Baby boomers are starting to retire en masse, which means that there are fewer eligible American workers. Demographics have always played a big role in the rise and fall of the labor force….

[S]ince 2000, the labor force rate has been steadily declining as the baby-boom generation has been retiring. Because of this, the Federal Reserve Bank of Chicago expects the labor force participation rate to be lower in 2020 than it is today, regardless of how well the economy does. In a March report titled “Dispelling an Urban Legend,” Dean Maki, an economist at Barclays Capital, found that demographics accounted for a majority of the drop in the participation rate since 2002….

Other reports find a smaller — but still significant — role for demographics. The Chicago Fed estimates that retirements accounted for only about one-quarter of the drop in labor force participation since the recession began…

In the Words of Christina Romer: "We Are So Scr*&@d": Labor-Force Participation and Structural Unemployment Blogging