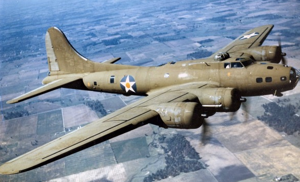 Germany, for the first time, was bombed with U.S. bombs, from U.S. airplanes, with U.S. crews. Maj. Green and Lt. Von Schmidt conducted the briefing at 0545 hours. #41-24541, Spook, 358BS-G, piloted by Lt. Oxrider, had a harrowing experience in keeping with the aircraft’s name. A life raft, released by the vibration from the firing of the top turret by T/Sgt. Frederick B. Ziemer, struck the left waist gunner, Sgt. Wilmer G. Raesley. The left waist gun went wild, shooting holes in the side of the aircraft and wounding the tail gunner, S/Sgt. James K. Sadler. Sgt. Sadler received two bullet holes (not serious) in his right buttock and was hospitalized. These events caused Lt. Oxrider to return home when ten miles over the English Channel.

Both waist guns and the ball turret fuse went out on #41-24558, Hunga Dunga, 358BS-F, piloted by Lt. McDonald. #41-24605, Knockout Dropper, 359BS-R, piloted by Lt. Roller, turned back when the interphone system stopped working. The eight remaining 303rd BG(H) B-17s and 45 others from the 91st, 305th, and 306th Bomb Groups, bombed the secondary target at Wilhelmshaven. The primary target, a power house at Vegesack, Germany, was obscured by clouds.

The 2BW B-24s failed to bomb when they were unable to locate the target because of cloud cover and poor navigation. Moderate, heavy and inaccurate anti-aircraft fire was observed in the target area while dropping 1,000-lb. bombs from 25,000 feet.

Ten to fifteen ME-109s were observed by the crews and about 30 encounters ensued. There were many claims for aircraft destroyed, and gunners were credited with one destroyed that crashed into the sea and one damaged.

All aircraft returned safely with only a few battle scars. Gunners declared that most of the German pilots were “Greenhorns” and made constant tactical mistakes, many of which would not be made again. Two crewmen suffered from frostbite.