Grasping Reality by Brad DeLong
Archives Highlighted Previous Edit COVID Market for Man Slavery 20th C. Reading 'Chicago'
The Full Fiscal Offset Principle (Away from the Zero Lower Bound, That Is): Or, Why One Would Expect the Multiplier to Be Zero Away from the ZLB Weblogging
Musica Sacra: February 16, 2013

John Cogan, Tobias Cwik, John Taylor, and Volker Wieland's Reputational Bet on Fiscal Policy Is Due, and They Are Bankrupt

In March I got a note from Ward Hanson asking me to come down here to Stanford and talk about:

the impact of the Stimulus Bill on jobs creation... the contrast between the Romer/Bernstein estimates of the benefits of the stimulus plan versus... Cogan, Taylor et al. that estimate/argue that there will be very little benefit.... I've got agreement from the "Taylor group" to present, as well as Martin Giles of the Economist Magazine to serve as a moderator...

exactly the same policy change... in another study... by one of us [John Taylor]... the results are vastly different.... [T]he Romer-Bernstein estimates apparently fail a simple robustness test, being far different from existing published results of another model... 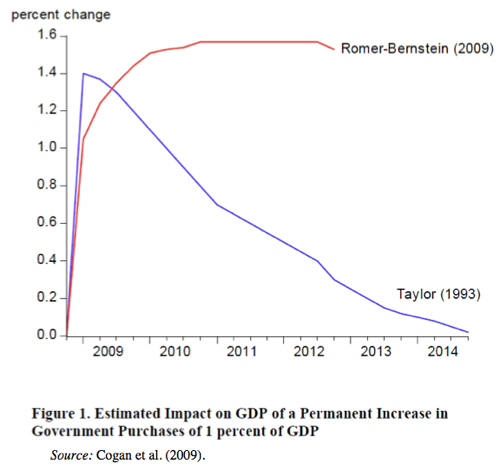 “Geez,” my first thought was, “this is embarrassing—none of four coauthors of Cogan actually read Romer-Bernstein. Sloppy.” Then I got to page 5 of Cogan: “Romer and Bernstein assume that the Federal Reserve pegs the interest rate—the federal funds rate—at the current level of zero...” Cogan et al. know perfectly well that the policy changes are not “exactly the same.” They just say they are.

I am sorry. In Europe that gets you four red cards. In America that gets you sent to the showers. The first intellectual responsibility of critique is to accurately present what you are critiquing. When Cogan et al. learn that they can come back into the game. But not until then.

Given that Cogan is simply not what it is being sold as—a critique of the argument of Romer-Bernstein—I think the best way for me to spend the rest of my time is to lay out why right now at this moment Christy Romer has transformed herself from a monetarist to a Keynesian. She is fundamentally a monetarist, a believer in monetary policy, author of papers on how it was monetary expansion that substantially alleviated the Great Depression in the late 1930s. Yet right now she is a Keynesian: a believer in, a designer of, and an advocate for Barack Obama’s plan to give the U.S. economy a fiscal boost to try to cushion the current fall in employment.

The analysis I am going to give is essentially that carried out nearly eighty years ago by one of Milton Friedman’s teachers, Jacob Viner, in his analysis of the Great Depression when he called for “large and continuous deficit budgets to combat the mass unemployment and deflation of the times.” Friedman applauded Viner’s analysis and saw it as superior to those of others like John Maynard Keynes: “so far as policy was concerned,” Friedman wrote in the early 1970s, “Keynes had nothing to offer those of us who had sat at the feet of [Henry] Simons, [Lloyd] Mints, [Frank] Knight, and [Jacob] Viner...”

Start with Robert Lucas’s observation that in a modern economy you cannot deflate—you cannot have the total nominal volume of spending fall—without having production, sales, and employment falls as well.

And also start with the quantity theory of money:

The total flow of spending in the economy—the amount produced and sold Y times the prices at which goods and services are sold P—is equal to the stock of money in the economy M—bank reserves, cash, checking- account balances, other liquid assets—times the velocity of money V. If PY threatens to fall—threatening a fall in production and sales and a rise in unemployment—then the standard policy Jacob Viner, Milton Friedman, and Christy Romer would recommend would be to boost M. Provided that V does not move in the opposite direction to offset the increase in M, nominal spending will stabilize and deflation and depression and high unemployment will be averted.

The loose end is V—how fast households and businesses spend their cash balances. Milton Friedman in Studies in the Quantity Theory of Money maintained that the key determinant of velocity is the (nominal) interest rate: the higher are nominal interest rates the higher is velocity because the faster you want to spend your money. Holding purchasing power in cash rather than in bonds is expensive when interest rates are high: you would rather either spend it and buy something or move it back into bonds that pay interest rather than keep it around idle. The velocity of money of money is low when interest rates are low because delaying purchases while you comparison shop is not costly: you lose little in foregone interest that you could have been earning.

This dependence of velocity on the interest rate puts a limit on the effectiveness of monetary expansion. When you expand the money stock you increase the ratio of money to bonds. By simple supply and demand raise the price of bonds in terms of money—and the price of bonds in terms of money is the inverse of the interest rate. So when you raise the money stock, you lower velocity. 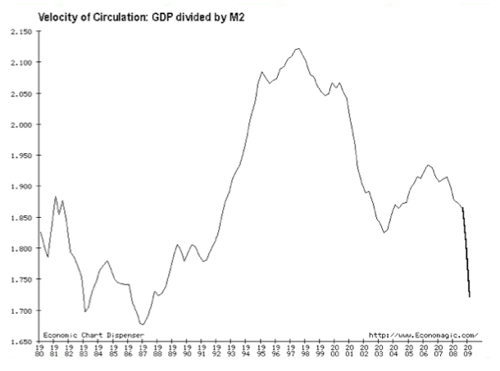 This matters when interest rates on assets like Treasury Bills get very low, like zero, like they are now. If you hold your money in a six-month Treasury Bill you get essentially no interest—0.3% per year Monday afternoon—and you run the small risk that interest rates might rise over the next month and your Bill might lose a little value. If you hold your money in cash you get exactly no interest and it is safe—FDIC insured. Thus there is no economic incentive pushing you to spend your cash when interest rates are very low. And so there is no economic reason for the velocity of money to be any particular value. When the central bank tries to boost nominal spending through standard monetary expansion it might prove ineffective: interest rates will drop even closer to zero as the ratio of money to bonds rises, and the velocity of money might well drop to offset the boost to the money stock.

Guess where we are now?

The Federal Reserve is boosting the money supply with extraordinary force, and the velocity of money is dropping like a stone. In order to ensure that monetary expansion is effective, you need to do something to boost interest rates. What can you? Here is where “large and continuous deficit budgets” comes in. When the government runs a deficit it floods the market with bonds. Once again by simple supply and demand more bonds means a lower price of bonds which is the same thing as higher interest rates. The government cannot hold on to the money it gets from selling bonds for that would reduce the money stock, and the whole point of the exercise is to make the increase in the money stock effective. It has to return the money to the private sector by spending it. And it can spend it in four ways:

Which of these ways would be most effective at keeping the velocity of money from falling further to offset expansionary monetary policy? The answer is that we really do not know which of the ways would be most effective—and that is the reason that we are trying them all right now, with Tim Geithner buying GM and mortgage-backed securities with the government’s money and Peter Orszag directing the flow of spending and tax cuts that is the American Recovery and Reinvestment Plan.

It is hard to see how it could not work, to some degree at least. Nobody disputes that in normal times monetary expansion boosts spending, demand, production, and employment. The worry is that these times are not normal. Nobody disputes that in not-normal times when interest rates are very low—as they are now—there is nothing keeping monetary velocity from falling to offset increases in the money supply. Purchasing insurance against this eventuality—which appears to be a reality outside the building—seems a reasonable thing to do.

Is this a good use of the government’s money?

It does, after all, saddle us with additional government debt. If we did not spend money on the stimulus program now, we could use that debt capacity for some other, different government expenditure in the future. But as of 4 PM EDT on Monday, the U.S. government could borrow for seven years at a real interest rate I estimate at –0.5% per year. Government expenditures on national security, on Medicare, on the Center for Disease Control, on the Interstate Highway System, on research and development into green energy technologies would have to be extraordinarily and uniquely inefficient right now for them not to be worth doing right now when they come with the extra bonus of making monetary policy effective in the current situation.

Thus my analysis of the stimulus program is quite positive. This analysis, remember, is not mine alone. It is the analysis of Milton Friedman’s teachers at the University of Chicago in the 1930s—the men of whom he highly approved as having left him nothing to learn from John Maynard Keynes, the men who called for a two-handed approach to the Great Depression:

That two-handed strategy is the approach we are pursuing now, in a situation that in its level of short-term interest rates has considerable similarities to the Great Depression.

It seems a wise and prudent bet.

Milton Friedman, ed. (1956), Studies in the Quantity Theory of Money.

John Cogan, Tobias Cwik, John Taylor, and Volker Wieland's Reputational Bet on Fiscal Policy Is Due, and They Are Bankrupt

In March I got a note from Ward Hanson asking me to come down here to Stanford and talk about:

the impact of the Stimulus Bill on jobs creation... the contrast between the Romer/Bernstein estimates of the benefits of the stimulus plan versus... Cogan, Taylor et al. that estimate/argue that there will be very little benefit.... I've got agreement from the "Taylor group" to present, as well as Martin Giles of the Economist Magazine to serve as a moderator...

exactly the same policy change... in another study... by one of us [John Taylor]... the results are vastly different.... [T]he Romer-Bernstein estimates apparently fail a simple robustness test, being far different from existing published results of another model...