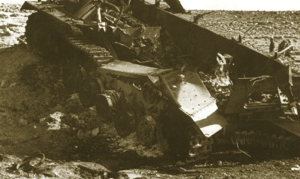 The attack started with tanks belonging to the 10th Panzer Division under the cover of a sandstorm advancing in two battle groups (the Reimann and Gerhardt groups) from Faïd…. Elements of [US 1st Armored Division's] CCA tried to delay the German advance…. By 10 a.m. the Germans had circled Djebel Lessouda (defended by Lessouda Force, an armoured battalion group commanded by Lieutenant Colonel John K. Waters, George S. Patton's son-in-law) and joined up north of Sidi Bou Zid.

Meanwhile the two battle groups of the 21st Panzer Division (Schütte and Stenckhoff groups) had secured the Maizila Pass to the south and the Schütte group headed north to engage two battalions of the 168th RCT on Djebel Ksaira while Stenckhoff headed northwest to Bir el Hafey…. Colonel Thomas Drake requested permission to retreat. This request was denied by Fredendall who ordered him to hold his positions and wait for reinforcements to arrive. This never happened….

By 5 p.m. Stenckhoff and 10th Panzer had made contact and the tanks and artillery of CCA had been driven nearly 15 miles (24 km) west to Djebel Hamra with the loss of 44 tanks and many guns. The infantry were left marooned on the high ground at Djebel Lessouda, Djebel Ksaira and Djebel Garet Hadid.