Grasping Reality by Brad DeLong
Archives Highlighted Previous Edit COVID Market for Man Slavery 20th C. Reading 'Chicago'
My John Maynard Keynes Lecture
Niall Ferguson Is Wrong to Say That He Is Doubly Stupid: Why Did Keynes Write "In the Long Run We Are All Dead"? Weblogging 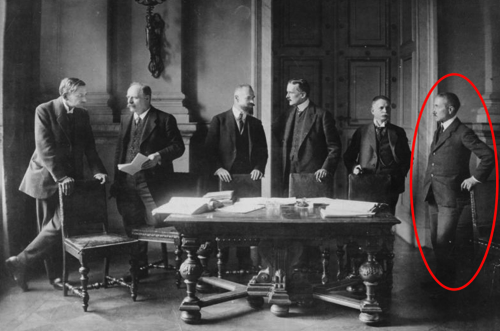 Apropos nothing at all I thought I might address the suggestion, sometimes raised, that John Maynard Keynes’s “love” for Carl Melchior, German representative at Versailles, might substantively have influenced Keynes’s position on what reparations the Germans ought to pay. Keynes made early calculations for what Germany should pay in reparations in October, 1918. In “Notes on an Indemnity,” he presented two sets of figures – one “without crushing Germany” and one “with crushing Germany”.

He objected to crushing Germany because seeking to extract too much from the enemy would:

defeat its object by leading to a condition in which the allies would have to give [Germany] a loan to save her from starvation and general anarchy… […] If Germany is to be ‘milked’, she must not first of all be ruined…

Keynes also worried that too large a reparations bill might distort international trade:

An indemnity so high that it can only be paid by means of a great expansion of Germany’s export trade must necessarily interfere with the export trade of other countries.”

The point of mentioning it is that Keynes developed these concerns prior to going to the negotiations and meeting Carl Melchior. Which is not to say that Melchior did not make a great impression on Keynes; as Keynes wrote in 1920,

A sad lot they were in those early days, with drawn, dejected faces and tired staring eyes, like men who had been hammered on the Stock Exchange. But from amongst them there stepped forward into the middle place a very small man, exquisitely clean, very well and neatly dressed, with a high stiff collar which seemed cleaner and whiter than an ordinary collar, his round head covered with grizzled hair shaved so close as to be like in substance to the pile of a close-made carpet, the line where his hair ended bounding his face and forehead in a very sharply defined and rather noble curve, his eyes gleaming straight at us, with extraordinary sorrow in them, yet like an honest animal at bay.

Keynes was so impressed by Melchior’s account of German suffering – both his implicit and explicit account – that he would illicitly confer with Melchior to try to strike a deal whereby the Germans would receive food relief in exchange for giving up merchant ships.

In The Economic Consequences of the Peace, Keynes criticized the treaty not only for what was in it – the reparations demands – but what was not:

The Treaty includes no provisions for the economic rehabilitation of Europe, – nothing to make the defeated Central Empires into good neighbors, nothing to stabilize the new States of Europe, nothing to reclaim Russia; nor does it promote in any way a compact of solidarity among the Allies themselves; no arrangement was reached at Paris for restoring the disordered finances of France and Italy, or to adjust the systems of the Old World and the New.

He warned that without such provisions:

"depression of the standard of life of the European populations" would lead to a political crisis, such that some desperate people might “submerge civilization itself in their attempts to satisfy desperately the overwhelming needs of the individual.

At the conference, Keynes himself had made such a proposal, suggesting refinancing the international debts to provide funds for reconstruction and development. Here it is worth noting that Keynes developed the plan after hearing Jan Smuts’s account of “the pitiful plight of Central Europe.”

So it seems that Melchior did matter to Keynes, and inspired him to propose relief for Germany. But as for his critique of the peace, what really mattered to Keynes was British self-interest, which inspired him to warn against reparations before he even went to France, and sympathy for the people of Central Europe, which inspired his “grand scheme for the rehabilitation of Europe” – which of course was only one of many “grand schemes” that showed Keynes’s interest in the long-run welfare of humanity.

Apropos nothing at all I thought I might address the suggestion, sometimes raised, that John Maynard Keynes’s “love” for Carl Melchior, German representative at Versailles, might substantively have influenced Keynes’s position on what reparations the Germans ought to pay. Keynes made early calculations for what Germany should pay in reparations in October, 1918. In “Notes on an Indemnity,” he presented two sets of figures – one “without crushing Germany” and one “with crushing Germany”.