Grasping Reality by Brad DeLong
Archives Highlighted Previous Edit COVID Market for Man Slavery 20th C. Reading 'Chicago'
Niall Ferguson Is Wrong to Say That He Is Doubly Stupid: Why Did Keynes Write "In the Long Run We Are All Dead"? Weblogging
I Say We Start a Kickstarter to "Persuade" David Glasner to Write 38 Posts--One for Each Chapter--on Keynes's "Treatise on Money" 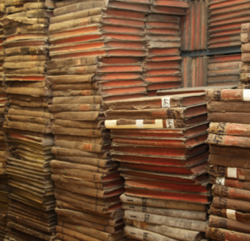 5th (Lord's day). Up and spent the morning, till the Barber came, in reading in my chamber part of Osborne's Advice to his Son (which I shall not never enough admire for sense and language), and being by and by trimmed, to Church, myself, wife, Ashwell, &c. Home to dinner, it raining, while that was prepared to my office to read over my vows with great affection and to very good purpose. So to dinner, and very well pleased with it. Then to church again, where a simple bawling young Scot preached. So home to my office alone till dark, reading some papers of my old navy precedents, and so home to supper, and, after some pleasant talk, my wife, Ashwell, and I to bed.

6th. Up very betimes and to my office, and there made an end of reading my book that I have of Mr. Barlow's of the Journal of the Commissioners of the Navy, who begun to act in the year 1628 and continued six years, wherein is fine observations and precedents out of which I do purpose to make a good collection. By and by, much against my will, being twice sent for, to Sir G. Carteret's to pass his accounts there, upon which Sir J. Minnes, Sir W. Batten, Sir W. Pen, and myself all the morning, and again after dinner to it, being vexed at my heart to see a thing of that importance done so slightly and with that neglect for which God pardon us, and I would I could mend it. Thence leaving them I made an excuse and away home, and took my wife by coach and left her at Madam Clerk's, to make a visit there, and I to the Committee of Tangier, where I found, to my great joy, my Lord Sandwich, the first time I have seen him abroad these some months, and by and by he rose and took leave, being, it seems, this night to go to Kensington or Chelsey, where he hath taken a lodging for a while to take the ayre. We staid, and after business done I got Mr. Coventry into the Matted Gallery and told him my whole mind concerning matters of our office, all my discontent to see things of so great trust carried so neglectfully, and what pitiful service the Controller and Surveyor make of their duties, and I disburdened my mind wholly to him and he to me his own, many things, telling me that he is much discouraged by seeing things not to grow better and better as he did well hope they would have done. Upon the whole, after a full hour's private discourse, telling one another our minds, we with great content parted, and with very great satisfaction for my [having] thus cleared my conscience, went to Dr. Clerk's and thence fetched my wife, and by coach home. To my office a little to set things in order, and so home to supper and to bed.

7th. Up very betimes, and angry with Will that he made no more haste to rise after I called him. So to my office, and all the morning there. At noon to the Exchange, and so home to dinner, where I found my wife had been with Ashwell to La Roche's to have her tooth drawn, which it seems aches much, but my wife could not get her to be contented to have it drawn after the first twich, but would let it alone, and so they came home with it undone, which made my wife and me good sport. After dinner to the office, where Sir J. Minnes did make a great complaint to me alone, how my clerk Mr. Hater had entered in one of the Sea books a ticket to have been signed by him before it had been examined, which makes the old fool mad almost, though there was upon enquiry the greatest reason in the world for it. Which though it vexes me, yet it is most to see from day to day what a coxcomb he is, and that so great a trust should lie in the hands of such a fool. We sat all the afternoon, and I late at my office, it being post night, and so home to supper, my father being come again to my house, and after supper to bed, and after some talk to sleep.

8th. Up betimes and to my office, and by and by, about 8 o'clock, to the Temple to Commissioner Pett lately come to town and discoursed about the affairs of our office, how ill they go through the corruption and folly of Sir W. Batten and Sir J. Minnes. Thence by water to White Hall, to chappell; where preached Dr. Pierce, the famous man that preached the sermon so much cried up, before the King against the Papists. His matter was the Devil tempting our Saviour, being carried into the Wilderness by the spirit. And he hath as much of natural eloquence as most men that ever I heard in my life, mixed with so much learning. After sermon I went up and saw the ceremony of the Bishop of Peterborough's paying homage upon the knee to the King, while Sir H. Bennet, Secretary, read the King's grant of the Bishopric of Lincoln, to which he is translated. His name is Dr. Lany. Here I also saw the Duke of Monmouth, with his Order of the Garter, the first time I ever saw it. I am told that the University of Cambridge did treat him a little while since with all the honour possible, with a comedy at Trinity College, and banquet; and made him Master of Arts there. All which, they say, the King took very well. Dr. Raynbow, Master of Magdalen, being now Vice-Chancellor. Home by water to dinner, and with my father, wife, and Ashwell, after dinner, by water towards Woolwich, and in our way I bethought myself that we had left our poor little dog that followed us out of doors at the waterside, and God knows whether he be not lost, which did not only strike my wife into a great passion but I must confess myself also; more than was becoming me. We immediately returned, I taking another boat and with my father went to Woolwich, while they went back to find the dog. I took my father on board the King's pleasure boat and down to Woolwich, and walked to Greenwich thence and turning into the park to show my father the steps up the hill, we found my wife, her woman, and dog attending us, which made us all merry again, and so took boats, they to Deptford and so by land to Half-way house, I into the King's yard and overlook them there, and eat and drank with them, and saw a company of seamen play drolly at our pence, and so home by water. I a little at the office, and so home to supper and to bed, after having Ashwell play my father and me a lesson upon her Tryangle.

9th. Up betimes and to my office, and anon we met upon finishing the Treasurer's accounts. At noon dined at home and am vexed to hear my wife tell me how our maid Mary do endeavour to corrupt our cook maid, which did please me very well, but I am resolved to rid the house of her as soon as I can. To the office and sat all the afternoon till 9 at night, and an hour after home to supper and bed. My father lying at Tom's to-night, he dining with my uncle Fenner and his sons and a great many more of the gang at his own cost to-day. To bed vexed also to think of Sir J. Minnes finding fault with Mr. Hater for what he had done the other day, though there be no hurt in the thing at all but only the old fool's jealousy, made worse by Sir W. Batten.

10th. Up very betimes and to my office, where most hard at business alone all the morning. At noon to the Exchange, where I hear that after great expectation from Ireland, and long stop of letters, there is good news come, that all is quiett after our great noise of troubles there, though some stir hath been as was reported. Off the Exchange with Sir J. Cutler and Mr. Grant to the Royall Oak Tavern, in Lumbard Street, where Alexander Broome the poet was, a merry and witty man, I believe, if he be not a little conceited, and here drank a sort of French wine, called Ho Bryan, that hath a good and most particular taste that I never met with. Home to dinner, and then by water abroad to Whitehall, my wife to see Mrs. Ferrers, I to Whitehall and the Park, doing no business. Then to my Lord's lodgings, met my wife, and walked to the New Exchange. There laid out 10s. upon pendents and painted leather gloves, very pretty and all the mode. So by coach home and to my office till late, and so to supper and to bed.

5th (Lord's day). Up and spent the morning, till the Barber came, in reading in my chamber part of Osborne's Advice to his Son (which I shall not never enough admire for sense and language), and being by and by trimmed, to Church, myself, wife, Ashwell, &c. Home to dinner, it raining, while that was prepared to my office to read over my vows with great affection and to very good purpose. So to dinner, and very well pleased with it. Then to church again, where a simple bawling young Scot preached. So home to my office alone till dark, reading some papers of my old navy precedents, and so home to supper, and, after some pleasant talk, my wife, Ashwell, and I to bed.