The Federal Reserve and the BIS Make Grave Errors of Policy

Long-term real interest rates were not supposed to rise by half a percentage point as a result of last week's FOMC meeting: 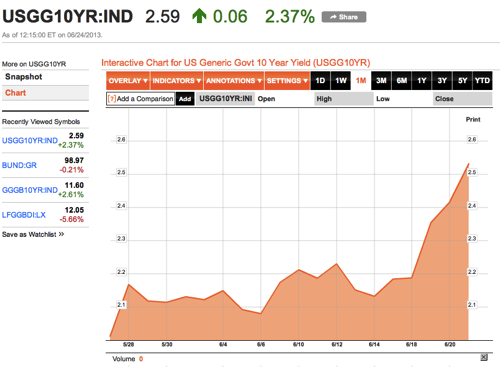 They did. This seems to me--and others--to be a bad error of monetary policy. And the BIS wants the Federal Reserve to do worse…

Wonkblog’s interview with St Louis Fed president James Bullard — an interview that answers pretty much every question you might have, with the exception of the “why did they do this” one. Bullard — who was the sole dissenting dove at the last FOMC meeting — released a formal statement shortly afterwards….

The consequences of the Fed’s statement are profound. The Fed spent years trying to get control of long-term interest rates — but we’ve just seen a rise in those rates which was so sharp and dramatic that it has taken the breath away from even hard-bitten Treasury traders…. The market turmoil is bad for wealth, of course: total global stock-market losses last week were more than $1 trillion, while the US bond market has lost almost as much. But more importantly, it’s bad for growth…. The FOMC decision to start talking about implementing tighter policy doesn’t really make sense. The latest Cleveland Fed estimate of 10-year expected inflation is 1.55%, very near the all-time low, and well below the Fed’s official target. And here’s the spread between the 10-year Treasury bond and the 10-year TIPS, which gives a day-to-day indication of what the market thinks inflation is going to be over the next 10 years: as you can see, it’s been falling of late to a decidedly un-worrying level.

With unemployment nowhere near the point at which wage pressures could create inflation, both of the Fed’s mandates are still pointing strongly towards loosening (if that were possible) rather than tightening…. QE is going to have to end at some point. But he has no good reason to believe that weaning markets off QE tomorrow would be harder than attempting it today. The market, for one, is telling him that in no uncertain terms.

Ben Bernanke and his colleagues at the Federal Reserve have been good guys… tried to boost the economy even as most of Washington seemingly either forgot about the jobless, or decided that the best way to cure unemployment was to intensify the suffering…. You can argue — and I would — that the Fed’s activism, while welcome, isn’t enough, and that it should be doing even more. But at least it didn’t lose sight of what’s really important.

Lately, Fed officials have been issuing increasingly strong hints that rather than doing more, they want to do less, that they are eager to start “tapering,” returning to normal monetary policy. The impression that the Fed is tired of trying so hard got even stronger last week, after a news conference in which Mr. Bernanke seemed quite happy to reinforce the message of an imminent reduction in stimulus.

The trouble is that this is very much the wrong signal to be sending… how far we remain from full employment four years after the official end of the 2007-9 recession. It’s true that measured unemployment is down — but that mainly reflects a decline in the number of people actively seeking jobs, rather than an increase in job availability…. Given this grim reality — plus very low inflation — you have to wonder why the Fed is talking at all about reducing its efforts on the economy’s behalf. Still, it’s just talk, right? Well, yes — but what the Fed says often matters as much as or more than what it does. This is inherent in the relationship between what the Fed more or less directly controls, namely short-term interest rates, and longer-term rates….

[R]ates have shot up since the tapering talk started. Two months ago the benchmark interest rate on 10-year U.S. government bonds was only 1.7 percent, close to a historic low. Since then the rate has risen to 2.4 percent — still low by normal standards, but, as I said, this isn’t a normal economy…. Fed officials surely understand all of this. So what do they think they’re doing?

One answer might be that the Fed has quietly come to agree with critics who argue that its easy-money policies are having damaging side-effects, say by increasing the risk of bubbles. But I hope that’s not true, since whatever damage low rates may do is trivial compared with the damage higher rates, and the resulting rise in unemployment, would inflict…. [M]y guess is… Fed officials are, consciously or not, responding to political pressure…. It’s hard to avoid the suspicion that Fed officials, worn down by the constant attacks, have been looking for a reason to slacken their efforts, and have seized on slightly better economic news as an excuse…. It’s sad and depressing, in both senses of the word. The fundamental reason our economy is still depressed after all these years is that so many policy makers lost the thread, forgetting that job creation was their most urgent task. Until now the Fed was an exception; but now it seems to be joining the club. Et tu, Ben?

The Bank for International Settlements… exhibit[s] the prejudices of the [cental banker] tribe in especially concentrated form… relentless in making the case for higher interest rates, on the grounds that… well, the logic keeps changing… inflation and commodity prices; when the inflation failed to materialize and commodity prices slumped… it simply changed the argument to one against bubbles, plus the quite amazing argument that central bankers must not keep rates low because that would take the fiscal pressure off governments. Who, exactly, elected these people to run the world?

But in its latest report the BIS really transcends itself… trots out every discredited argument for austerity, with not a hint of acknowledgement that these arguments have been researched and refuted at length….

But the real reason to be horrified by this report doesn’t lie in the details, it lies in the destructive incoherence of the whole vision. The BIS largely accepts a balance-sheet, debt-overhang view of the crisis…. And it demands that everyone, public and private both, deleverage fast, starting immediately.

Does anyone see the problem?

If everyone is slashing spending, who will buy what they have to sell? And won’t a global depression — because that, in effect, is what they’re calling for — both undermine attempts to save and actually raise debt/GDP ratios, though a falling denominator? In fact, their own data are trying to tell them this story. They lament the fact that debt ratios have risen, not fallen, in most countries.

The Federal Reserve and the BIS Make Grave Errors of Policy

Long-term real interest rates were not supposed to rise by half a percentage point as a result of last week's FOMC meeting:

They did. This seems to me--and others--to be a bad error of monetary policy. And the BIS wants the Federal Reserve to do worse…