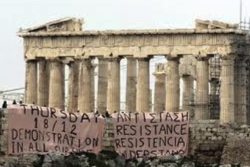 The properly-formulated Bagehot Rule is that in a financial crisis, the lender-of-last-resort:

Lessons of a Greek Tragedy: The critical policy mistakes were those committed at the outset… in the first half of 2010…. The country’s sovereign debt should have been restructured without delay. Had Greece quickly written down its debt burden by two-thirds, it would have been able to shed its crushing debt overhang. It could have used a portion of the interest savings to recapitalize the banks. It could have cut taxes, rather than raising them. It could have jump-started investment and gotten its economy moving again…. In its official post-mortem on the crisis, the International Monetary Fund now agrees…. But this was not its view at the time. Under the leadership of Dominique Strauss-Kahn, the Fund was in thrall to the French and German governments….

The European Commission, for its part, has rejected the IMF’s mea culpa. Preoccupied by the state of the French and German banks, it continues to argue that delaying debt restructuring was the right thing to do. It has no regrets…. Given this opposition, the Greek government would have had to move unilaterally. Hindsight suggests that the authorities should have done just that…. But, instead of working together with its social partners, the government, heeding the troika’s advice, dismantled the country’s collective-bargaining system, leaving workers unrepresented. Greece thus lacked a mechanism to negotiate a social compact to cut wages, pensions, and other obligations in an equitable way…. The troika demanded a pound of flesh, in the form of front-loaded austerity, as the price of assistance. Those front-loaded tax increases and government-spending cuts plunged the economy deeper into recession, making a farce of claims that the public debt was sustainable – and forcing the inevitable debt restructuring after two more agonizing years…. The damage will not be easily undone.

The properly-formulated Bagehot Rule is that in a financial crisis, the lender-of-last-resort: