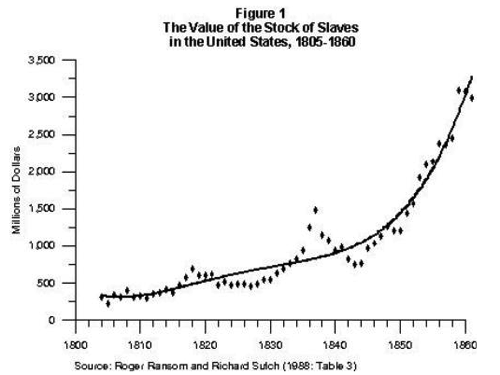 No, Lincoln Could Not Have 'Bought The Slaves': I saw the graph above for the first time yesterday, and it made me shiver. It's taken from historian  Roger L. Ransom's article "The Economics Of The Civil War."

When you look at how American planters discussed slavery, over time, you find a marked shift. In the late 18th, early 19th century, slavery is is seen as an unfortunate inheritance, a problem of morality lacking a practical solution. Thomas Jefferson's articulation is probably the definitive in this school of thinking:

There must doubtless be an unhappy influence on the manners of our people produced by the existence of slavery among us. The whole commerce between master and slave is a perpetual exercise of the most boisterous passions, the most unremitting despotism on the one part, and degrading submissions on the other.

In Jefferson's day, talk of eventual abolition was not particularly rare in the South. Slave-owners spoke of colonization and some even emancipated their own slaves, The Quakers had a presence in the South and in the late 18th century banned slave-holding (If anyone has a precise date, I'll gladly insert.) Prominent slave-owning southerners like Henry Clay were in pursuit of some kind of compromise which would purge the country of its birth taint.

But by the 1830s, such thinking was out of vogue in the South. Men like Henry Clay's cousin Cassius Clay, once wrote:

Slavery is an evil to the slave, by depriving nearly three millions of men of the best gift of God to man -- liberty. I stop here -- this is enough of itself to give us a full anticipation of the long catalogue of human woe, and physical and intellectual and moral abasement which follows in the wake of Slavery. Slavery is an evil to the master. It is utterly subservient of the Christian religion. It violates the great law upon which that religion is based, and on account of which it vaunts its preeminence.

In 1845 Clay was run out of Kentucky by a mob. By then the Calhoun school had taken root and Southerners had begun arguing that slavery was not immoral, but a positive good:

Never before has the black race of Central Africa, from the dawn of history to the present day, attained a condition so civilized and so improved, not only physically, but morally and intellectually. In the meantime, the white or European race, has not degenerated. It has kept pace with its brethren in other sections of the Union where slavery does not exist. It is odious to make comparison; but I appeal to all sides whether the South is not equal in virtue, intelligence, patriotism, courage, disinterestedness, and all the high qualities which adorn our nature.

But I take higher ground. I hold that in the present state of civilization, where two races of different origin, and distinguished by color, and other physical differences, as well as intellectual, are brought together, the relation now existing in the slaveholding States between the two, is, instead of an evil, a good--a positive good.

This is not just a rebuke of abolitionist thinking, but a rebuke of Jeffersonian thinking. Fifteen years later, Alexander Stephens would call Jefferson out by name arguing that his presumption of equality among men was a grievous error.

Perhaps this is too crude an interpretation but the graph above, measuring the incredible rise in the wealth represented by the pilfering of black labor, tracks directly with the political debate. When slaves were worth only a cool $300 million, property in man was an "unhappy influence." When that number skyrocketed in excess of $3 billion, suddenly it was a "positive good." Perhaps this is to deterministic. I leave it to my fellow commenters to color in the portrait. At any rate the notion that such an interest--by far the greatest collective asset in the country at the time--could be merely incidental to the war is creationist quackery.

But on to the problem.

Ron Paul's argument is essentially that it would have been better for the government to bail out slave-holders by effecting a mass purchase of blacks. This would have saved a lot of money, as well as the lives and limbs of a lot of white people. I do not believe that saving lives and limbs of any people--white or black--to be a disreputable goal. But I refuse to lose sight of the fact that slavery was, itself, war. And the lives and limbs of black people were perpetually at stake for centuries. From 1860 to 1865 the rest of the country received a concentrated dose of that medicine which black people had been made to quaff for over two and a half centuries. It is now a century and a half later, but still in some corners of white America it is fashionable to remain embittered.

Nevertheless, the saving of people is, indeed, a noble goal, and Paul is not without at least the rudiments of a case. Enslaved black people were constructed into an interest representing $3 billion. ($70-75 billion in 21st century money.) But including expenditures, loss of property, loss of life (human capital,) the war, according to Ransom, costs $6.6 billion.

The numbers are clear--the South's decision to raise an army, encourage sedition among its neighbors, and fire on federal property, was an economic disaster for white America. Moreover, the loss of 600,000 lives, in a war launched to erect an empire on the cornerstone of white supremacy and African slavery, was a great moral disaster for all corners of America.

In the most crude sense, it would have been much "cheaper" for the government to effect a mass purchase. But how? Ransom gives us some thoughts:

One "economic" solution to the slave problem would be for those who objected to slavery to "buy out" the economic interest of Southern slaveholders. Under such a scheme, the federal government would purchase slaves. A major problem here was that the costs of such a scheme would have been enormous. Claudia Goldin estimates that the cost of having the government buy all the slaves in the United States in 1860, would be about $2.7 billion (1973: 85, Table 1). Obviously, such a large sum could not be paid all at once. Yet even if the payments were spread over 25 years, the annual costs of such a scheme would involve a tripling of federal government outlays (Ransom and Sutch 1990: 39-42)! The costs could be reduced substantially if instead of freeing all the slaves at once, children were left in bondage until the age of 18 or 21 (Goldin 1973:85). Yet there would remain the problem of how even those reduced costs could be distributed among various groups in the population. The cost of any "compensated" emancipation scheme was so high that even those who wished to eliminate slavery were unwilling to pay for a "buyout" of those who owned slaves.

It is statement on the quality of our journalism, that I have seen Ron Paul repeatedly note that compensated emancipation would have avoided the Civil War, but I never seen a journalist ask him "How?" The "How" is quite clear--either by tripling the federal budget for 25 years, or through the (continued) enslavement of children.

These are all questions from the buyer-side. What about the seller? Would slaveholders willingly sell at "fair" price? How do we decide fair?

[A]s a slaveowner, you know that an abolitionist government values slaves more than you. In particular, they don't have a reason to pay lower prices as they buy more slaves. Therefore, the market in slaves breaks down immediately upon the beginning of compensated emancipation. Suddenly, there's a big buyer who will keep on buying. Just like a bond trader, why would you charge a big buyer the liquid market price if you know he's not going to stop buying? You should charge him the highest value of the last slave owned by any slaveowner, at the very least.

This is the theory of the cartel in the economics of industrial organisation. The social apparatus of a slaveholding society should minimise the number of defections from this cartel by easy sellers; in particular, they would fear that one's status would fall if one chooses money while one's neighbours choose to continue owning human beings. Sellers now have the market power; the price rises as a result.

A government which buys slaves, with the explicit intent to buy all slaves, is in a poor bargaining position versus slaveowners…. Signalling your intention to buy up all the supply of a commodity on the market increases the price you'll pay, whether that be bonds or human beings.

The thought-experiment, here, needs to be full gamed out. Ostensibly, in the government you have a buyer which, faced with the threat of mass violence, is willing to pay a large sum to end slavery. In slave-holders you have a seller, that does not want to sell, that has reacted violently to recent talk of selling, that, further, believes slavery is a good thing, ordained by God and the Bible. The greater country--having rejected war as an option--has no ability to compel this seller to any price. On the contrary, the country is, itself, partially dependent on slave-holders. ("By the mid 1830s, cotton shipments accounted for more than half the value of all exports from the United States," writes Ransom.)

How does one make this work? And more importantly, why do we need to?

We are united in our hatred of war and our abhorrence of violence. But a hatred of war is not enough, and when employed to conjure away history, it is a cynical vanity which posits that one is, somehow, in possession of a prophetic insight and supernatural morality which evaded our forefathers. It is all fine to speak of how history "should have been." It takes something more to ask why it wasn't, and then to confront what it actually was.

No, Lincoln Could Not Have 'Bought The Slaves': I saw the graph above for the first time yesterday, and it made me shiver. It's taken from historian  Roger L. Ransom's article "The Economics Of The Civil War."