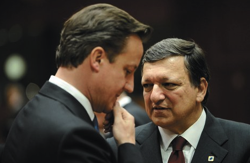 Not just in Europe: Barack Obama did substantial damage with his declaration in the 2010 State of the Union address that it was time to reverse fiscal stimulus:

Barack Obama: Families across the country are tightening their belts and making tough decisions. The federal government should do the same. So tonight, I'm proposing specific steps to pay for the trillion dollars that it took to rescue the economy last year. Starting in 2011, we are prepared to freeze government spending for three years. Spending related to our national security, Medicare, Medicaid, and Social Security will not be affected. But all other discretionary government programs will.  Like any cash-strapped family, we will work within a budget to invest in what we need and sacrifice what we don't. And if I have to enforce this discipline by veto, I will. We will continue to go through the budget, line by line, page by page, to eliminate programs that we can't afford and don't work.

I complained as loudly as I could: why had Barack Obama done this in what was still a very depressed economy where the best that could be said was that the employment-to-population ratio had stopped falling? More than one economic policy official told me that it was not worth getting upset about because the administration and congress could still do whatever stimulus they wanted through the tax codes and through mandatory spending--missing (or pretending the miss) the very important point that no congress will ever be braver than its president. Another economic policy official told me that while it was true that he had not--as at least some of the most senior economic policy officials had--fought it, and while his colleagues were pissed at him, he had definitely not endorsed it and did not think it was a good thing to have done.

Austerity came to Europe in the first half of 2010, with the Greek crisis, the coalition government in the UK, and above all, in June of that year, the Toronto summit of the group of twenty leading countries. This meeting prematurely reversed the successful stimulus launched at the previous summits and declared, roundly, that “advanced economies have committed to fiscal plans that will at least halve deficits by 2013.” This was clearly an attempt at austerity… prematurely and unwisely made…. What was the consequence? In a word, “dire.”

In 2010, as a result of heroic interventions by the monetary and fiscal authorities, many countries hit by the crisis enjoyed surprisingly good recoveries from the “great recession” of 2008–2009. This then stopped…. Even if the IMF is right about a recovery this year, it will be 2015 before [Britain's] economy reaches the size it was before the crisis began. The picture in the eurozone is worse: its economy expanded by 2 percent between 2009 and 2010. It is now forecast to expand by a mere 0.4 percent between 2010 and 2013….

Why is strong fiscal support needed after a financial crisis? The answer for the crisis of recent years is that, with the credit system damaged and asset prices falling, short-term interest rates quickly fell to the lower boundary—that is, they were cut to nearly zero…. Used in conjunction with monetary policy, aggressive and well-designed fiscal stimulus is the most effective response to the huge decrease in spending by individuals as they try to save money in order to pay down debt. This desire for higher savings is the salient characteristic of the post–financial crisis economy, which now characterizes the US, Europe, and Japan. Together these three still make up more than 50 percent of the world economy.

Of course, some think that neither monetary nor fiscal policy should be used. Instead, they argue, we should “liquidate labor, liquidate stocks, liquidate the farmers, liquidate real estate.” In other words, sell everything until they reach a rock-bottom price at which point, supposedly, the economy will readjust and spending and investing will resume. That, according to Herbert Hoover, was the advice he received from Andrew Mellon, the Treasury secretary, as America plunged into the Great Depression. Mellon thought government should do nothing. This advice manages to be both stupid and wicked. Stupid, because following it would almost certainly lead to a depression across the advanced world. Wicked, because of the misery that would follow….

The UK certainly did have alternatives—a host of them. It could have chosen from a wide range of different fiscal policies. The government could, for example, have:

It could, in brief, have preserved more freedom to respond to the exceptional circumstances it confronted.

Why did the government not do so?

The right approach to a crisis of this kind is to use everything: policies that strengthen the banking system; policies that increase private sector incentives to invest; expansionary monetary policies; and, last but not least, the government’s capacity to borrow and spend.

Failing to do this, in the UK, or failing to make this possible, in the eurozone, has helped cause a lamentably weak recovery that is very likely to leave long-lasting scars. It was a huge mistake. It is not too late to change course.