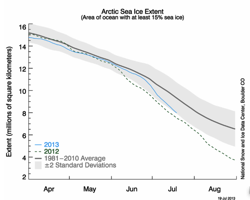 I think that, for most global-warming fearers, it is naivete that makes them advocate an immediate program to attempt to freeze global CO2 concentrations as close to current levels as possible…

I can’t entirely endorse this statement, but I can recognize a certain fairness to it. Costs associated with GCC amelioration measures are not something at the forefront of many (but by no means all) environmental advocates of strong and immediate action.

So fair enough. But then he goes on to say

They think that we have to stop global warming sometime–a temperature rise of even 3F per century cannot be sustained for very many centuries, and even the locations that gain from one century of global warming are likely to lose from three. They simply have not focused on the possibility that we might want to stop it not now but in one century (after China and India have industrialized).

(multiple obnoxious forms of emphasis added, to convey my shock and horror)

I really should be getting to work, so I’ll keep my responses short.

I can consider semi-endorsing the first point on the assumption that we use the time before the freeze/decrease in greenhouse gas emissions to develop technological alternatives and ways to delink emissions and growth/standard of living. There are many ways to do this, some of which are being pursued, many of which are not, and many of which have all kinds of auxilliary benefits. If we’re going to let emissions increase for now, we desperately need to pair that with activities to prepare to freeze/reduce them in the future. Waiting for date X to deal with the problem won’t be much help if we’re not any more prepared to deal with it then rather than now.

Furthermore, the leap from not right now to one century is beyond huge. The assumption that we could go with business as usual vis-a-vis emissions is implied here, and it’s not warranted. We simply don’t have the models to predict anything that accurate. There are numerous feedbacks that can’t be predicted. The IPCC has said a close study of the climate models predicts a 1.4-5.8 degree increase from 1990-2100 (2001 IPCC summary for policymakers here, PDF). So it could be a lot more than 3 degrees. Secondly, the costs of dealing with the situation might be even greater at that time, since stopping warming may require even more massive cuts in emissions at that time than they would now. And even if those massive cuts did take place in 2100 on the dot, there would likely be several more decades, at a minimum, of warming due to the atmospheric life of greenhouse gasses.

But perhaps more importantly, we can’t predict all the effects of how much harm a 3 (or 1.4, or 5.8) temp increase would do. There is also a great deal of uncertainly regarding sea-level rise per degree of temperature rise, and there are other potential impacts not considered (the slowing of atlantic sea currents is not considered likely by scientists, but it is a real possibility). The role of climate change in extreme weather events is something we’re only beginning to understand. In short, we can’t simply do a cost benefit analysis of 3 degrees vs. India/China industrialization. There’s too much uncertaintly in too many different places. The Europeans have occasionally been inclined to  approach (some) environmental hazards with something called the precautionary principle. This certainly can be taken too far, but there are good reasons to take it seriously.

Update: Lots of good comments (and a few stupid ones) follow DeLong’s post. Bruce Moonaw suggests that other greenhouse gasses might be easier and less costly to reduce for now. Perhaps this is true with some of them, but not (as he suggests) methane. Here’s why: methane is, molecule for molecule, considerably less of a problem than CO2 becuase it’s atmospheric life is much shorter. Also, methane is primarily associated with food production (rice and cows, mostly) and as such is rather important for poverty reduction and prevention. If we are skittish about demanding reductions for global justice based reasons, methane is the last gas we should go after. Finally, methane emissions have tended to follow global population pretty closely, so we needn’t worry about a huge increase in the future. There are techniques for growing rice that reduce methane emissions, and to the extent they are feasible they should be pursued, but CO2 emissions are the bulk of the problem and must be confronted if we’re serious about addressing it.

I think that, for most global-warming fearers, it is naivete that makes them advocate an immediate program to attempt to freeze global CO2 concentrations as close to current levels as possible…

I can’t entirely endorse this statement, but I can recognize a certain fairness to it. Costs associated with GCC amelioration measures are not something at the forefront of many (but by no means all) environmental advocates of strong and immediate action.