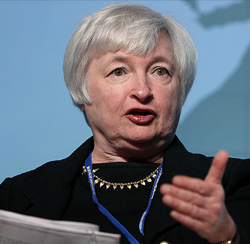 The favored parlor game of the political-economic complex right now is guessing who will replace Ben Bernanke as chairman of the Federal Reserve…. Janet Yellen… is by no means a sure thing. One important reason she’s not--and I don’t know another way to say this--is sexism, as evidenced by the seemingly uncoordinated yet disturbingly consistent whispering campaign against her. The message isn’t always delivered in a whisper, of course. In May, Federal Reserve Bank of Dallas President Richard Fisher suggested on CNBC that if Yellen is chosen, the pick will have been “driven by gender.” That’s more of a shouting campaign….

I’ve had a surprising number of discussions that follow the same pattern: “Yellen is great,” my interlocutor will say. “But…” The “but” is a variation on a theme. She lacks “toughness.” She’s short on “gravitas.” Too “soft-spoken” or “passive.” Some mused that she is not as aggressively brilliant or intellectually probing as other candidates--though they hasten to say she’s clearly very knowledgeable about monetary policy. Others have wondered whether she could handle the inevitable fights with Congress. Requests for specifics don’t yield much. It’s more a feeling. An intuition. A sense….

What the complaints share is an implicit definition of leadership based on stereotypically male qualities…. This generic portrait survives in part because monetary economics remains a bit of a boys’ club…. Bernanke’s performance drives home the core problem with criticisms of Yellen: The qualities she supposedly lacks don’t necessarily have much to do with running the Federal Reserve. An aggressive chairman can alienate members of the Fed’s powerful Open Market Committee. A chairman too convinced of her brilliance or too forceful in suppressing dissenting voices can miss developments that don’t conform to her model--a problem that bedeviled the end of Greenspan’s term. As for gravitas, well, that comes from a job well done….

In the end, what matters is that the Fed chairman gets the big monetary calls right and is able to convince the rest of the Open Market Committee to go along. Yellen has gotten a lot of big calls right.

If you go back to its December 2007 transcripts -- the most recent we have--you’ll find the Federal Reserve predicting that the economy would avoid recession. William Dudley, now the chairman of the Federal Reserve Bank of New York, said that “fear is diminishing, which implies less risk of a crisis developing from this source”--“this source” meaning the bunk mortgages that would imperil Wall Street and the world a year later. You’ll also find Yellen voicing a prescient note of pessimism. “The possibilities of a credit crunch developing and of the economy slipping into a recession seem all too real,” she warned. In ensuing years, Yellen pushed for the Federal Reserve to do more to combat unemployment--advice that Bernanke and the rest of the FOMC eventually followed….

Given the importance of the post, the arguments against her ought to be made out loud, and based on something more than a male-coded template of what leadership used to look like.

As somebody who had an office next to Janet Yellen's in the period between when the Clinton administration ended and she was installed as president of the San Francisco Fed, let me say that she is plenty smart.

It is interesting to contrast the "disturbingly consistent" sotto voce assessments of Janet with the same community's assessment of Bob Rubin, as detailed by George Packer in his (unfair) portrait in The Unwinding:

Because his odds of making partner at Cleary, Gottlieb weren’t great, in 1966 Robert Rubin looked around for a job on Wall Street. Going from a law firm to an investment bank was very unusual in those days, but his father landed him introductions at Lazard Frères and Goldman Sachs, and to his surprise they both made offers. He joined Goldman’s arbitrage department, even though he didn’t know what risk arbitrage was, and he doubted that he had the audacity to get executives on the phone to question them about prospective deals.

The head of Goldman, the legendary Gus Levy, regularly yelled at Rubin for asking stupid questions, but Levy also thought that he would one day run the firm--which seemed far-fetched to Rubin at the time. In spite of doing well in arbitrage, he never in a million years thought he’d be offered a partnership, so he looked around for another job and was surprised, to say the least, when Goldman made him partner on the first day of fiscal year 1971. Within a few years he was on the management committee.

All his life he carried around a yellow legal pad, writing down notes and numbers, analyzing the likelihood of different outcomes, calculating risk and expected value. He found that he was interested in trading as an exercise in thinking about probabilities. Thinking probabilistically meant that he took even remote contingencies into account. The stress and flux of arbitrage left others nerve-racked and blinded by their own fear or greed, but he was always able to take the pressure of high-stakes trades in stride. He was a reasonably commercial person, but he didn’t find his purpose in making money--he had learned that people found fulfillment only within themselves--and his identity wasn’t job-dependent. This freed him to think more clearly about risk. He took the long view, keeping in mind that the result of a trade wouldn’t matter in a hundred years and that, while he enjoyed his membership in the establishment, he could always walk away into a different existence--sitting in a Left Bank café reading Tropic of Cancer and talking about the meaning of life, or fly-fishing at Spruce Creek or Tierra del Fuego.

His core belief was that nothing could be proven to a certainty, so he functioned well in the uncertain world of markets. (He was also a reasonably good poker player.) This philosophical detachment made him a surprisingly successful arbitrageur….

Rubin stood in the political center, looking in both directions, but he was a Democrat, because he was concerned about the plight of the poor. He was also worried about the growing deficits of the Reagan years. He wanted to get involved in politics--few things were more attractive to him than the thought of seeing the world from inside the White House--so he began raising money for the Democratic Party. In 1982, his friend Bob Strauss asked him to chair a congressional fundraiser. Rubin wasn’t at all sure that he would be able to raise enough money….

After half a life at Goldman Sachs he was worth well over a hundred million dollars and lived in a Park Avenue penthouse, but he still wore plain rumpled suits to the office, walked around his neighborhood in an old pair of khakis, and always made time to read and fish. Colleagues heard him say “just one man’s opinion” a dozen times a day. He was careful to hedge his ambition with humility, his risk-taking with expressions of worry.

When Bill Clinton was elected president in 1992, Rubin wasn’t at all sure that he would be offered a position in the new administration, but he became the first director of the newly created National Economic Council. He had no idea how to function in the White House--didn’t even know what a “decision memo” was--but he brought his yellow legal pad, moved into rooms at the Jefferson Hotel, and sought advice from Washington veterans like Brent Scowcroft and Jody Powell. At meetings in the Oval Office or the Roosevelt Room, he didn’t try to get as close as possible to the president; he liked to stay away from the head of the table, read the people in the room, and speak from a slight remove. Self-effacement worked as well for him in Washington as it had on Wall Street. “You’re going to be the strongest person in the White House,” the president once said, which Rubin thought was ridiculous. He was just hoping to be relevant…

The favored parlor game of the political-economic complex right now is guessing who will replace Ben Bernanke as chairman of the Federal Reserve…. Janet Yellen… is by no means a sure thing. One important reason she’s not--and I don’t know another way to say this--is sexism, as evidenced by the seemingly uncoordinated yet disturbingly consistent whispering campaign against her. The message isn’t always delivered in a whisper, of course. In May, Federal Reserve Bank of Dallas President Richard Fisher suggested on CNBC that if Yellen is chosen, the pick will have been “driven by gender.” That’s more of a shouting campaign….