Yes, the Status of Health in the U.S. Is a Disaster. Why Do You Ask? 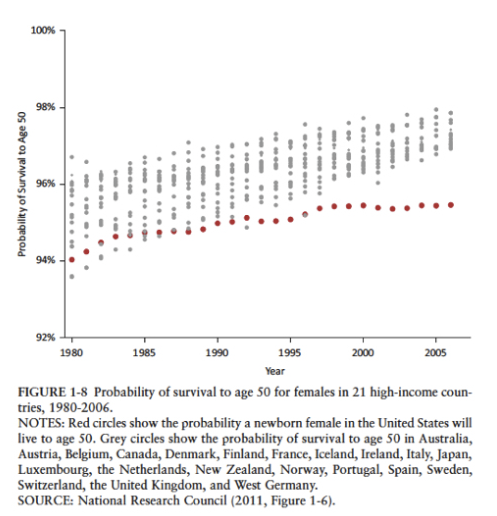 With poor health outcomes spanning so many different domains (communicable, chronic, etc.) and age groups, it is not surprising that there is not a single causal factor that completely accounts for the disadvantage of the United States--it’s not just a lack of universal health care, greater economic inequality, higher child poverty, differences in lifestyle factors, racial diversity, a more libertarian culture, or weaker public health regulations--it’s probably a little bit of all of these things. It is notable for instance, that Americans are relatively disadvantaged even when considering non-minority whites with upper incomes and better education.

Should we despair? “American health disadvantage: it’s everything” is not a particularly good bumper sticker slogan, nor an apt slogan for a political campaign…. American health disadvantage is not inevitable and it’s not excusable. There are other roads that the United States could have taken over the last thirty years that would have led to very different outcomes, and there are still opportunities to get back onto a healthier path.

Yes, the Status of Health in the U.S. Is a Disaster. Why Do You Ask?