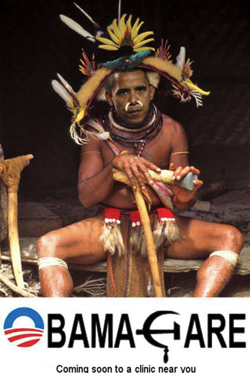 A few thoughts provoked by reading Mann and Ornstein this morning…

And do the Boehners and the McConnells and the Romneys and the McCains and the Bushes stand up on our hind legs and say to the base: "Wait a minute! These are our policies!"? No--with the exception of George W. Bush on immigration policy, who did so, and thus showed more cojones than the entire rest of today's Republican Party put together. More than Mitt Romney, especially, whose former aides in Massachusetts have now fanned out all across the country implementing nationwide his health-care reform plan--and doing so without his lifting a finger to help.

There are two theories about what is going on. One is that McConnell and Boehner like their jobs, and believe that Gingrich and Dole made a fatal mistake after the 1995 debacle--that they tried to govern with a Democratic President rather than continuing to throw raw meat to the base, and they are not going to make Gingrich's and Dole's mistake. In this case, McConnell and Boehner are trying to be clever in making the base their tool. The other is that the Republican base is petrified that, now that a Black Man runs the country, he is going to do to them what they did to African-Americans for four centuries, and so they desperately need their politicians to block everything he proposes to try to keep karma from paying them a visit. In this case, McConnell and Boehner are too weak to remember why they wanted high federal office in the first place.

If you read the works of Tom Mann and Norm Ornstein--or listen to them in person--and you come away with a view that fixing American politics requires one of two things:

Instead, they waffle and hedge and wink-wink and, in this latest, call for the U.S. Chamber of Commerce, the Campaign to Fix the Debt, and the Committee for a Responsible Federal Budget to bring an end to "partisanship" in Washington.

And in so doing, they make themselves part of the problem.

Thomas E. Mann and Norman J. Ornstein: Our fantasy: A Congress that gets stuff done:

We lamented the ideological divides in Washington, which had become almost tribal in nature, and the skewed nature of political polarization, emphasizing a Republican Party gone off the rails…. Our fantasy… the handful of Republican lawmakers who are speaking openly about the folly of pursuing blackmail… [joined by] some influential outsiders… U.S. Chamber of Commerce… Campaign to Fix the Debt… Committee for a Responsible Federal Budget… mobiliz[ed] public opinion behind a platform of “First do no harm: No sequester, no government shutdown, no debt-ceiling hostage-taking”? That could do more than years of ineffectual calls for bipartisan grand compromises and tax reform…. Omnibus package… take the debt limit off the table… create a national infrastructure bank… acknowledged progress already made on the deficit and aimed first to do no harm, incorporating ideas from both sides and some measures that are anathema to each side, would garner broad support in the Senate, perhaps 75 votes. It would be applauded by business and labor leaders and received enthusiastically in the markets, putting pressure on Speaker John Boehner (R-Ohio) to bring the measure to the House floor, with or without the support of a majority of Republicans. It would probably pass the House with the support of at least 190 Democrats and 30 or more Republicans. The enactment of such a measure, focusing on the problems we face rather than serving a radical ideology, would do wonders to boost the economy and restore some public confidence in Congress. It might even set the stage for the completion of immigration reform.

The elements of this package…. One could easily imagine Ronald Reagan or Bill Clinton embracing them all. And our fantasy is based on a real understanding of today’s political hurdles…. But… chances of such a deal materializing are slim to nonexistent…. House Republicans around the country encountered angry constituents--goaded by GOP Sens. Ted Cruz of Texas and Mike Lee of Utah--demanding that they hold to the threat to shut down the government unless Obama agrees to defund Obamacare…. Boehner has fended off his radicals is to suggest a better way to hit Obamacare and slash spending even further: using the debt limit again for leverage…. The House Republican majority is not being run by its leaders but by its most extreme faction, its role amplified by outside media and money…. The ruthlessly pragmatic minority leader, Mitch McConnell (R-Ky.), is in full crisis mode, facing a primary challenge from the right that is forcing him to play nice with Cruz and fellow Kentucky Sen. Rand Paul and not cut more deals. The No. 2 Republican leader, John Cornyn (Tex.), has his own campaign headaches. And we saw the challenge to bipartisan action up close as a modest gun background-check bill failed to garner 60 votes because, as Sen. Pat Toomey (Pa.), its Republican sponsor, told reporters, too many of his colleagues would not vote for anything supported by the president….

American politics is not just worse than it looks. It’s even worse than we thought.

And I would be very, very grateful if somebody can tell me why nobody in the Obama White House said the obvious thing in January 2009--that our policies have to work and have to be perceived as working in putting us on the path to a strong economy by October 2010, for that is our only chance of avoiding another November 1994.

And I gotta reprint Mitt Romney's official Massachusetts portrait. What does he want to have in the picture with him? The RomneyCare bill--the thing that is now being implemented nationwide as ObamaCare: 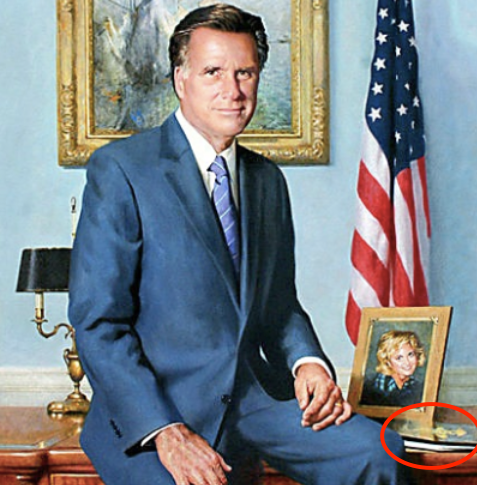 A few thoughts provoked by reading Mann and Ornstein this morning…