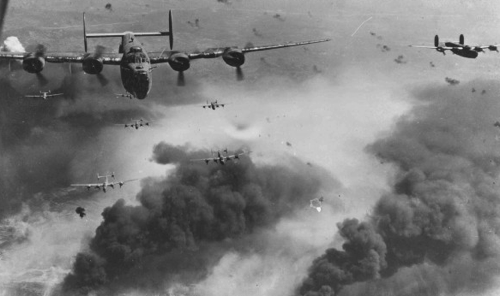 We were very close behind the second flight of three ships. As their bombs were dropping we were on our run in. There in the center of the target was the big boiler house, just as in the pictures we had seen. As the first ships approached the target we could see them flying through a mass of ground fire. It was mostly coming from ground-placed 20 mm. automatic weapons, and it was as thick as hail.

The first ships dropped their bombs squarely on the boiler house and immediately a series of explosions took place. They weren’t the explosions of thousand pound bombs, but of boilers blowing up and fires of split-open firebanks touching off the volatile gases of the cracking plant. Bits of the roof of the house blew up, lifting to a level above the height of the chimneys, and the flames leaped high after the debris. The second three ships went over coming in from the left, and dropped partly on the boiler house and partly on the cracking plant beyond. More explosions and higher flames.

Already the fires were leaping higher than the level of our approach. We had gauged ourselves to clear the tallest chimney in the plant by a few feet. Now there was a mass of flame and black smoke reaching much higher, and there were intermittent explosions lighting up the black pall.

Phifer, the bombardier, said over the interphone, ‘Those damn bombs are going off. They ain’t supposed to do that.’

We found ourselves at that moment running a gauntlet of tracers and cannon fire of all types that made me despair of ever covering those last few hundred yards to the point where we could let the bombs go. The antiaircraft defenses were literally throwing up a curtain of steel. From the target grew the column of flames, smoke, and explosions, and we were headed straight into it.

Suddenly Sergeant WeIls, our small, childlike radio operator who was in the waist compartment for the moment with a camera, called out, ‘Lieutenant Hughes’s ship is leaking gas. He’s been hit hard in his left wing fuel section.’

I had noticed it just about that moment. I was tired of looking out the front at those German guns firing at us. I looked out to the right for a moment and saw a sheet of raw gasoline trailing Pete’s left wing. He stuck right in formation with us. He must have known he was hard hit because the gas was coming out in such volume that it blinded the waist gunners in his ship from our view. Poor Petel Fine religious, conscientious boy with a young wife waiting for him back in Texas. He was holding his ship in formation to drop his bombs on the target, knowing if he didn’t pull up he would have to fly through a solid room of fire with a tremendous stream of gasoline gushing from his ship.

I flicked the switch intermittently to fire the remote-control, fixed fifty caliber machine guns specially installed for my use. I watched my tracers dig the ground. Poor Pete. How I wished he’d pull up a few hundred feet and drop from a higher altitude.

As we were going into the furnace, I said a quick prayer. During those moments I didn’t think that I could possibly come out alive, and I knew Pete couldn’t. Bombs were away. Everything was black for a few seconds. We must have cleared the chimneys by inches. We must have, for we kept flying – and as we passed over the boiler house another explosion kicked our tail high and our nose down. Fowble pulled back on the wheel and the Lib leveled out, almost clipping the tops off houses. We were through the impenetrable wall, but what of Pete? I looked out right. Still he was there in close formation, but he was on fire all around his left wing where it joined the fuselage.

I could feel tears come into my eyes and my throat clog up. Then I saw Pete pull up and out of formation. His bombs were laid squarely on the target along with ours. With his mission accomplished, he was making a valiant attempt to kill his excess speed and set the ship down in a little river valley south of the town before the whole business blew up. He was going about 210 miles per hour and had to slow up to about 110 to get the ship down.

He was gliding without power, as it seemed, slowing up and pulling off to the right in the direction of a moderately flat valley: Pete was fighting now to save himself and his men. He was too low for any of them to jump and there was not time for the airplane to climb to a sufficient altitude to permit a chute to open. The lives of the crew were in their pilot’s hands, and he gave it everything he had.

Wells, in our waist gun compartment, was taking pictures of the gruesome spectacle. Slowly the ship on our right lost speed and began to settle in a glide that looked like it might come to a reasonably good crash-landing. But flames were spreading furiously all over the left side of the ship. I could see it plainly, as it was on my side.

Now it would touch down-but just before it did, the left wing came off. The flames had been too much and had literally burnt the wing off. The heavy ship cartwheeled and a great shower of flame and smoke appeared just ahead of the point where last we had seen a bomber. Pete had given his life and the lives of his crew to carry out his assigned task. To the very end he gave the battle every ounce he had.

We were very close behind the second flight of three ships. As their bombs were dropping we were on our run in. There in the center of the target was the big boiler house, just as in the pictures we had seen. As the first ships approached the target we could see them flying through a mass of ground fire. It was mostly coming from ground-placed 20 mm. automatic weapons, and it was as thick as hail.