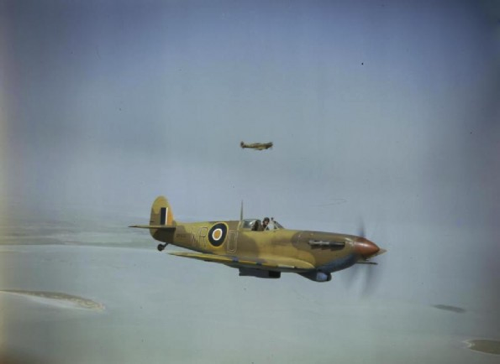 Suddenly I found myself in a relatively clear bit of sky. Spitfires and Focke-Wulfs swirled all round. Four vertical trails of heavy black smoke that hung in the air without dissipating marked the fatal trajectory of four aircraft, whose debris blazed on the ground, scattered in the meadows 27,000 feet below.

Parachutes began to blossom on every side. Why no reinforcements? What was the controller waiting for? Twenty-four against 200 didn’t give us much chance.

Paradoxically, we got along well for a time. There were far too many Focke-Wulfs, and they got in one another’s way. All the same, our retreat was cut off.

What got me down was that, with so many Huns all round me, I wasn’t shooting a single one down.

At last an opportunity presented itself.… I attacked an Fw 190 from three-quarters rear. Just as I opened fire, he saw me and broke right, diving.

I was now gaining on him and went on ring at less than 100 yards. I distinguished the pilot’s face turning round.…

I pressed the multiple button and this time fired all my guns at once — two cannon and four machine guns — to have done with it. Two shells exploded simultaneously just behind the engine and the cockpit belched forth a cloud of black smoke. We were only 1,000 feet up. Roads and villages passed below our wings. Flames now gleamed through the smoke — the blow had been mortal. We went on down still further. A church steeple went by on a level with me….

I had exhausted my ammunition…. But I had got him!

At appalling speed the Focke-Wulf, still on its back, hit the ground and slid, scattering incandescent fragments everywhere… and crashed against a road bank in a dazzling shower of sparks.

But I hadn’t finished yet: I had to get back to England. Quickly I pin-pointed my position: I was to the east of the forest bordering Saint Omer airfield. I began to breathe again, but not for long. Up there the battle still went on. The radio told me that Buiron had shot down a Hun.

What a hell of a fight for a wing leader – particularly the Biggin Hill leader — to find himself isolated!

Things were still going badly above me.… as I soon saw. I had just discreetly set course for England when a bunch of Focke—Wulfs decided to take an interest in my poor isolated Spitfire, which seemed so ill at ease.

On the coast just above Boulogne I succeeded in catching up with four Spitfires in impeccable defensive formation. I drew near cautiously, announcing my presence. I identied them as NL-C, NL-A, NL—S, and NL—D, evidently Yellow Section, and Martel authorized me over the RT to join them.

For five minutes more the Germans went on attacking us.… Suddenly the sky filled with “contrails” — a hundred, perhaps, in fours, coming from the north. It was the Thunderbolts, at last. Still, better late than never, and they certainly saved our bacon.

The Focke-Wulfs did not insist. They all dived down and disappeared in the rising evening mist.

We landed on the first airfield on the coast — Manston…. We counted heads — only ten. Commandant Mouchotte and Sergent—Chef Magrot were missing. We hung on the telephone. Biggin Hill had no information, the controller had lost all trace of Mouchotte and none of the emergency fields had reported his arrival. Not much hope now, for his tanks must have been empty for the last quarter of an hour at least.

It was a tragic blow, and the world no longer seemed the same.

When we took off to return to Biggin, the sun was beginning to slip down to the sea and, on the horizon, low mist hung over the battlefield where we had left two of our comrades.

We landed with navigation lights on, and we could make out a silent group in front of Dispersal. All the personnel of the squadron were there — those who had not flown today, the fitters, Group Captain Malan, Wing Commander Deere, Checketts — anxiously waiting for fresh news, a scrap of information, anything on which to build hope.

For us he had been the pattern of a leader, just, tolerant, bold and calm in battle, the finest type of Frenchman, inspiring respect whatever the circumstances.

Suddenly I found myself in a relatively clear bit of sky. Spitfires and Focke-Wulfs swirled all round. Four vertical trails of heavy black smoke that hung in the air without dissipating marked the fatal trajectory of four aircraft, whose debris blazed on the ground, scattered in the meadows 27,000 feet below.

Parachutes began to blossom on every side. Why no reinforcements? What was the controller waiting for? Twenty-four against 200 didn’t give us much chance.