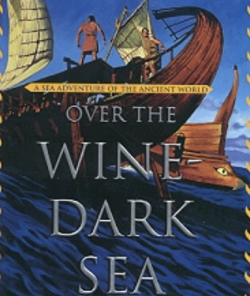 I picked this book up from the Barnes and Noble front table on my way down to Monterey for vacation. I had been looking for something light. Instead, I found myself engaged in the book for perhaps four times as many hours as I would usually spend on a book this length. I was entranced because the subject was interesting, because the writing did not get in the way of the story, and because I found myself greatly admiring the project--the historical, educational project--that the author is engaged in.

H.N. Turteltaub is also Harry Turtledove, the author of a large number of heroic fantasy novels and an even larger number of "alternate history" novels. But in this book Turteltaub attempts a very different project. Over the Wine-Dark Sea tells the story of the voyage of a 40-oared merchant galley, the Aphrodite, with its captain, quartermaster, and crew, from Rhodes to Naples and back in the summer of 310 B.C.

The plot does not fit the requirements of unity and cohesion that we have grown to expect from a novel--the idea that if we are told that there is a gun hanging on the wall in chapter 1, it should be fired before the end of the book. Instead, the plot is much more beads-on-a-string: negotiating with suppliers, negotiating with customers, navigating through the Aegean Sea, getting caught in storms, evading pirates, attending drinking parties, and so forth. The focus of the book is not on the development of a character, or on some decisive event in an individual's or a civilization's history, but on the threads and character of daily life in the late fourth-century B.C. Mediterranean. History-with-a-capital-H appears--we are told of the maneuverings of Alexander the Great's generals as they kill Alexander's children and carve up his empire into pieces for themselves, we see Agathokles Tyrant of Syracuse fight the Carthaginians, and we watch the Romans enter the stage of history--but history-with-a-capital H is pure background.

Instead, the focus is on merchant captain Menedemos as he flees outraged husbands, sells peacocks, and exhorts his crew to row faster; and on his quartermaster-cousin Sostratos as he reckons up profit-and-loss in his head and tries to curb the more dangerous enthusiasms of his risk-loving captain.

Does Turteltaub succeed in his project? I would say "Yes, definitely." A book like Courtesans and Fishcakes will tell you more facts about life in the fourth century B.C. Aegean. But Over the Wine-Dark Sea fits them into a pattern--the pattern of a merchant voyage--so that they make sense as the components of a thriving, expanding culture. All in all, I was impressed.

I did, however, have three significant complaints about the book:

First, the book gives little sense the grinding poverty of the working classes in the Hellenistic Mediterranean. During this age the population of the--for the time well-settled and technologically advanced--Greek ekumene was growing at about 2.7% per twenty-year generation. In a civilization that lacked the restraints on fertility imposed by the European nuclear family marriage pattern or the Chinese lineage system, and in which girls were routinely married off at fifteen, such a low rate of population growth tells us horrible things about the disease and nutrition environment in which the bulk of the population lived. In a pre-industrial population in which people are not at the edge of malnutrition, like the colonial United States, populations double every twenty years. Even the population of southern slaves doubled every twenty years. The population is growing so slowly because the people of the Hellenistic Mediterranean, most of them, are at the edge of malnutrition: too little fat and calories for many women to ovulate regularly, too little protein to grow tall, too little nutrition to successfully overcome many diseases.

There are a few hints of what is going on. One young women comments offhand that a peahen is given almost as much food as a slave. She is back in her father's house at 18 because her husband has died of disease. But these are only hints. Instead, the focus is on the ship and what it carries, upper-class consumption patterns and upper-class consumption goods: papyrus, navigation, silk, high-quality wine, and preparations for an extensive feast for which the centerpiece is to be a dogfish. The slaves didn't eat dogfish.

Second, it is hard to get a sense of exactly what the Aphrodite is carrying. We know that it is carrying 125 amphorae of Arousian wine from Khios, yes. But exactly how large is an amphora? Does it take up two cubic feet in the cargo area? How big is the cargo area? How much silk, perfume, and so forth is the ship carrying? And how big are each of the 800 sacks of grain that the ship takes to Syracuse? We are told occasional numbers--costs, sale prices, quantities--but not enough to get a sense for ourselves of how the business is going. (Although we do see Menedemos and Sostratos get happier and happier as the voyage proceeds.)

Third, if I read this voyage correctly, it is an extraordinarily profitable one. Everything goes right. Menedemos runs extraordinary risks in pursuit of extraordinary profits, and wins. And so the reaction of Menedemos's and Sostratos's family when they get back to Rhodes is alarmingly and inhumanly restrained.

First, let's set up some equivalences. In the silver money of the Aegean 100 drakhmai make a mina, 60 minae make a talent. 1 drakhma is a working-class wage for a ten-hour day--call it the equivalent (in labor time) of $50. (Of course, it is not the equivalent of $50 today in purchasing power: if we think of a drakhma as a $50 bill, then a pound of grain costs about $10 (compared to $0.30 today at Safeway); a bottle of highest-quality Arousian wine costs $80 (where it is made in Khios) or $250 (when it is sold in Italy) (compared to $20 today at Beverages and More); the two books Sostratos owns (Herodotos's Histories and Thoukydides's Peloponnesian War) probably cost him $5000 each (makes the $8.95 Penguin Classics editions look like a real bargain, yes?). Whether the real labor-time price gap is tenfold, thirtyfold, or five-hundredfold, from our perspective even the rich of the pre-industrial past were appallingly poor in everything except the numbers of their slaves.)

Menedemos and Sostratos ship 125 amphorae of wine from Khios to Italy, buy it at a price of $800 per (ten-bottle?) amphora, sell it at an average price of somewhere around $2500 per amphora, and so reap a gross margin of $212,500 on this part of their cargo. If this wine is 1/5 of their normal cargo, and if the gross margin is the same on the rest of their cargo, then the boat has a gross margin of $1,000,000 from the purchase in Greece and sale in Italy of its normal cargo. From this, we have to subtract the galley's operating costs, the biggest of which is the expense of the rowers: 40 rowers at 1.5 drakhmai a day for a 200-day sailing season gives us $600,000 in direct labor costs.

The $400,000 operating profit remaining seems a reasonable amount for a normal successful voyage. It has to cover the costs of winter maintenance, interest on capital, and allowance for risk of loss of the entire ship and its cargo to pirates or storms. A ship is a valuable and expensive piece of capital equipment itself, worth less (perhaps a third?) but not astronomically less than its cargo, and its loss would be expensive. The possible total loss of the cargo to storms or pirates is an even greater risk.

However, on this voyage Menedemos and Sostratos have a number of extra items that they carry, all of which are astonishingly profitable. They earn $10,000 carrying mercenaries from Greece to Italy. They bring the first peacocks to Italy, which they sell for a gross margin of $260,000. They fill their ship with grain and run past the Carthaginian blockade to resupply besieged Syracuse. How much grain can their 60 foot long, 10 foot wide boat carry? How deep is its cargo hold? If they can carry 36000 lbs of grain, then--if they did collect four times the going rate of $10 a lb for it--they earned $1,440,000 from the Syracusan treasury for that part of the voyage.

The total operating profit, after labor costs but before wear-and-tear on the ship, insurance, et cetera? It looks to me like about 8 talents--$2,500,000. That is enough to (I think) buy ten ships the size of the Aphrodite. That is a fivefold return on invested capital over a six-month voyage. For a couple of 25 year olds on one of their first few voyages in charge of one of the family's ships, that is an amazing profit. The grumpy family members should have been more appeased. The non-grumpy family members should have been boasting of the voyage as one of the mercantile coups of the century. (Nevertheless, it is important to remember that even rich Hellenistic Rhodian merchants were, by our standards, very poor. Menedemos's room at his father's house is "sparsely furnished: a bedstead with a wool-stuffed mattress, a chamber pot under it, a chair beside it, and two cypresswood chests, a smaller atop a larger. The larger one held Sostratos's tunics and mantles. The smaller held his books," both of them, the Histories and the Peloponnesian War.) The reaction of the family to their return seems too psychologically restrained to make sense to me.

But these three objections of mine are relatively picky ones. Taken as a whole, the core of the book is its descriptions, and its descriptions--of material life, of culture and attitudes, and of economic transactions--are very thick, and very nice. I found the book entrancing.

Is there a market for this kind of book? I may be overpessimistic, but I doubt it. The treatment of women is historically accurate: brutally sexist. There are no smart-and-sassy princesses-in-disguise who break through gender roles to happiness: there is only a widowed sister confined to the women's quarters who is at 18 old and spoiled goods on the marriage market, a slave-prostitute who plots to become a courtesan and dreams that Sostratos will buy her and rescue her, and worse. The plot is, by its nature, episodic. It does not conform to the expectations that we bring to a standard novel.

Thus the book's principal attraction is to those whose main concern is that they know that the past is another country, and they want to learn how they did things differently then. I fear that this audience is much smaller than the audiences for fantasy or romance or alternate history.

And that is too bad.

I picked this book up from the Barnes and Noble front table on my way down to Monterey for vacation. I had been looking for something light. Instead, I found myself engaged in the book for perhaps four times as many hours as I would usually spend on a book this length. I was entranced because the subject was interesting, because the writing did not get in the way of the story, and because I found myself greatly admiring the project--the historical, educational project--that the author is engaged in.