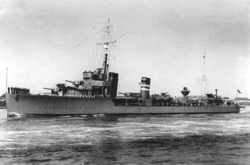 World War II Today: The Last Major Episode in the Battle of the Atlantic:

The ships of Convoy ONS 202 and 18 continued their steady course west. The marshalling of 65 merchant ships in mid Atlantic would never have been an easy task in the fog and heavy seas that prevailed. On top of this the Convoy commander had to attempt co-ordinate his Escort group of warships, in a fight against a group of U-boats that were making a combined attack.

Already HM Frigate LAGAN had been damaged beyond repair, and HM Corvette POLYANTHUS and HM Destroyer ST CROIX had been sunk. He did not know that these ships had been the victims of the new German T5 acoustic torpedoes.

The limitations of radar and inter ship communication meant that he only had a limited understanding of events as they occurred.

This is part of the Narrative of Events from M.J. Evans, Commander, R.N., Senior Officer for the Escort Group with the convoy.

At 22.38, Itchen obtained another contact and at 23.37, Itchen and Morden were both in contact with several submarines coming in from the starboard bow.

“Pineapple” [a pre planned programme of searching for U -boats] was ordered with ships in the van illuminating but no further submarines were sighted. In the firework display, which was going on in the van, it was not possible for me to distinguish whether a merchant ship had been torpedoed. At the time I thought one probably had been and was later confirmed – wrongly – in this belief by a report from Renoncule that she was in company with a stopped ship 4 miles astern of the port columns. This ship was in fact the S.S. Wisla who had courageously stopped and picked up three survivors from Itchen.

Shortly afterwards Morden reported that it was an escort that had blown up astern of her. As Morden should have been in position on the starboard bow, I at first thought that she must have been referring to Towy although this did not at all fit in with the picture as I had seen it. When operational signals allowed I called all escorts on R/T and established the fact that only Itchen was not answering.

At this stage this was all the Convoy commander knew of the fate of HMS Itchen.

The full Narrative report and much more on this convoy can be found at War Sailors.

It remained for William Fisher to complete the account of what happened to HMS Itchen. He had been on HMCS St Croix when it had been torpedoed on the 20th and had spent thirteen hours in the whaler before being picked up by HMS Itchen. This is his account:

We found a place to sleep, the night passed quietly and part of the next day. Around four o’clock action stations sounded. The Itchen dropped a few charges. The boys were talking of what they were going to do – stay with the convoy or go into port. At about six clock we were all at supper – a very good supper too – when action stations sounded again. We all went up on deck. We dropped some charges, then things quieted down. I was talking to the SBA and he said the injured boys were all fine. Then around eight we had action again. We dropped charges and made another sweep around and came in and dropped one charge. We made another quick sweep and came in and dropped a big pattern. The conning tower of the sub came up and then disappeared.

There were a lot of bubbles and oil and we were sure we had got a sub and we were happy. We all went down below and tried to sleep. About a quarter to nine, 22nd September, action stations went again. We went to the upper deck where it was quite cold and very dark. Around nine our searchlight went on and there was a sub in the beam. I was standing by the funnel and had hold of the railing around the funnel.

I looked past the bridge and could see the sub about three hundred yards ahead. It was cutting across our bow. Then the forward gun went off but the shell landed short and the bridge gunners started to fire. There was an explosion. We had been torpedoed. I was blown about thirty feet and landed against a gun deck. I got up, the ship was listing and I could hear water rushing in. I couldn’t see a thing. I got the davit of the skiff, reached out with the other hand to get to the railing. Just before I jumped over the side I called for my chum Mackenzie, but there was no answer. So I dove over the side.

As I hit the water there was a terrible explosion. I was sucked under and nearly lost consciousness. My insides seemed to be squeezed out of me. I was choking as I struggled back to surface again, got a breath of air, and a wave took me under. I came up and started to swim away from the ship. I swam about thirty or forty feet and looked back at the propellers of the Itchen which were just disappearing. She had gone down in about forty seconds.

It has been forty-nine hours between torpedoing of the two ships. I started swimming around and remembered to take my shoes off. I reached down to take my right shoe off and it was gone, I reached and took off my left one. I had on a big duffle coat and I unbuttoned it but forgot to undo the mouth piece. It slipped under my chin and started to choke me but I finally got it off. There were quite a few star shells in the air; the water was rough.

I saw a lad holding onto a board, and swam over and took hold of the board with him. The water was very cold and I started to get cramps. I held onto the board for about one hour only. Then the lad passed away and I started to run into quite a few bodies. I could hear a few of the boys hollering.

Then the convoy started to pass us. The wash from the ships would wash us back and forth; we would go under and choke and there was a lot of oil and small boards that would slap us in the face. Then the star shells stopped going up and it got very dark. I saw a small flare and hollered out to a fellow and asked him what he had. He said he had a float, so I swam over towards him. He had two life savers. He gave me one, the one with the calso flare on it. I put it around me, then a wave parted us.

There was a splash and I could hear voices. I looked and there was a freighter [SS Waleha] which had dropped one of its floats, I tried to swim to it but I was too weak, so I hollered at them and they said they were coming. It was good news, I saw a light but it seemed far off, then I heard the sound of a motor boat. I could hear voices but couldn’t see a thing except the light. Then I felt something hit my face and heard somebody say grab the rope. Then I saw the motor boat when it was nearly on top of me.

They threw me the rope again, I caught it and was pulled up to the side of the motor boat. A hand grabbed me and pulled me inside. I lay there coughing and too tired to move; I was cold. I couldn’t understand what they were saying. I finally moved beside the engine and tried to get some heat. They circled around and picked up two more boys.

They pulled alongside of their ship and as they pulled the motor boat up I felt a lot of hot water go over me it certainly felt good. It was the exhaust from the engine. One of the lads they had picked up was doing a lot of groaning. Finally they got the boat up and put blankets around me and helped me into the officers’ wardroom. They gave me a full glass of rum. I drank it all and it warmed me up.

I was a frightful looking sight covered with oil from head to foot, but they got some towels and rubbed the oil off and put my feet in hot water. I had been in the water 3 hours when I was picked up for the second time. The other lad lay on the floor groaning. They were rubbing him with whiskey and trying to get him to drink some.

The Narrative of Events was only able to conclude:

Commander P.W. Burnett of HMCS Gatineau has carried out an investigation to find out what occurred in this mêlée. His conclusion is that “it appears that HMS Itchen was torpedoed in her foremost magazine just after she had sighted and engaged, and just before she rammed the U-boat. The latter was probably considerably shaken by the explosion and dived: its attack was frustrated and no ships of the convoy were torpedoed.”

This was the last major U boat attack of the war in the Atlantic, for a good summary of events see The Last Hurrah, for a discussion about whether the rescue ship was SS Wisla or SS Wahela or even the SS James Smith see War Sailors.

World War II Today: The Last Major Episode in the Battle of the Atlantic:

The ships of Convoy ONS 202 and 18 continued their steady course west. The marshalling of 65 merchant ships in mid Atlantic would never have been an easy task in the fog and heavy seas that prevailed. On top of this the Convoy commander had to attempt co-ordinate his Escort group of warships, in a fight against a group of U-boats that were making a combined attack.

Already HM Frigate LAGAN had been damaged beyond repair, and HM Corvette POLYANTHUS and HM Destroyer ST CROIX had been sunk. He did not know that these ships had been the victims of the new German T5 acoustic torpedoes.