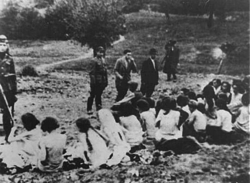 In September 1941 soon after entering Kiev the Germans murdered almost the entire Jewish population of the city. Around 30,000 were marched out of the city to a site near to the ravine of Babi Yar, forced to undress and then marched into the ravine itself where they were shot.

It is estimated that a further 80,000 Jews were brought from the surrounding area over the course of the following year and met the same fate. Further victims including ‘Ukrainian citizens of both sexes, prisoners of war, sailors from the Dnieper fleet, and gypsies’ brought the likely total of people killed there to 150,000.

Then in the spring of 1942 the SS decided that they wanted to cover up their crimes. The bodies would be exhumed and burnt. Yakov Kaper was one of the Jews kept in the new Camp Syret for this purpose. They exhumed bodies from both the ravine and a nearby anti tank ditch that had been used for the same purpose. He describes the process:

On one side, a furnace was being erected. First they brought stones taken from the Jewish cemetery. The tomb-stones bore the dates of those buried in the cemetery. Long railway rails were put on those stones, then iron fences also removed from the cemetery and then some logs with a little room in between to let air through when they started burning.

Topaide headed the work of those making, the furnaces. He ran from one place to another without a minute’s rest. He gave quick orders and went on running. The main work was in Babi Yar but he also ran over to us in the antitank trench.

When everything was ready we were ordered to pull the corpses out and put them on the furnaces. For this special tools were prepared. There was a handle in the form of ring and a rod 50-60 centimeters long with the hooked sharpened end. We were shown how to insert this hook under the chin and pull the corpse out.

All this work was done very quickly since every five prisoners were supervised by a German with a whip. If he struck he could kill. And all the time we heard the cries Schnell! We pulled out the corpse and brought it up to the ground There other people picked it up. They opened the mouth first. If there were golden teeth, they were pulled out. Then they took off the footwear and then accurately laid it by the head. Several layers of corpses were put together and then all were doused with oil.

Logs were laid and then more corpses and so forth. So at the end it was 2,5 or 3 meters in height. In order to put corpses on the top, a special scaffolding was erected. Thus, during the day we prepared for each furnace about two and a half to three thousand corpses. When everything was ready once again oil was poured over everything and the furnace was lit with torches.

At first the bright flame lit the whole ravine but gradually the black smoke covered the flame. The air filled with smoke and the sweetish smell of burning. It became impossible to breathe. At first hair was burning then the bodies caught fire.

Germans who were with us there also couldn’t breathe and were very often replaced. They also carried flasks with water and they drank it constantly. At the same time another furnace was being prepared in another place, and while one furnace was burning down another was lit.

Bones remained almost untouched though they were in fire. They were gathered and put on a special ground lain with granite plates. A special team was crushing those bones into small pieces with special mortars. Then they were sieved and big bones were again crushed then mixed with sand and were scattered on the road.

When the working day was over we were lined up and went over to the others who worked in Babi Yar. They were standing in the line and were waiting for us. Again the chains were checked and afterwards we were given a scoop of soup and went to the barracks.

By September 1943 the work was almost complete. The inmates of Camp Syret knew it would be their turn soon. Although they were shackled day and night, they discovered they had access to a variety of keys. Although the bottom layers of bodies were usually naked, the upper bodies were more usually clothed. Many of these victims had carried keys in their pockets – the last thing they had done was lock up their houses before they were marched off.

At enormous risk, because they would have been shot out of hand had they been discovered in possession of keys, they stole a number of keys. So it was that the Camp Syret prisoners found the means to undo their shackles and to release themselves.

On the night of 28th/29th September the last remaining prisoners, some 327, began unlocking themselves from their chains. Their only hope was to make a simultaneous mass breakout, in the hope that some might survive:

When everything with the lock and the chains was ready we came up to the door very quietly. Philip Vilkes quietly removed the lock and cried out, Run for your lives, comrades! Hurrah! The guards got frightened at first but after several minutes the guard standing on the watch tower started shooting with the machine-gun.

The Germans who stood near our barracks were silent and I thought they had been mowed down by the gunfire. But our comrades, who ran out first told us later that they had attacked the Germans. There was a fight and the machine-gun was aimed at the open doors. But people ran outside, oblivious to this fact. They were shot down dead while others ran after them crying out, Hurrah!

At last the Germans understood what was happening and all the guards got to their feet. They started pursuing us on cars, motorcycles and with dogs. The ravine was lit with flares. The shooting remained in front of us. The pursuers did not know where to aim their shooting since all the prisoners scattered in different directions. Some of them ran off with a chain still clamped to one leg, since they had no time to unchain it.

The majority of the prisoners were running along the ravine. Some of them went up the slope along the highway towards the Syrets camp and further on to the Bolshevikplant.

Those who ran along the ravine had only one option towards Kurenevka. At dawn, as the shooting continued, one could hear cries, cursing and the barking of dogs in the distance. The Germans who were pursuing us went down to the bottom of the ravine.

Those who were on motorcycles and cars dashed to seal all the ways out of the ravine. With luck, since we had been running without stopping, by the time they closed off the ravine everybody had already managed to escape. We tried to scatter. Tragically only a few people managed to escape. In fact, out of all the prisoners only 18 survived.

In September 1941 soon after entering Kiev the Germans murdered almost the entire Jewish population of the city. Around 30,000 were marched out of the city to a site near to the ravine of Babi Yar, forced to undress and then marched into the ravine itself where they were shot.

It is estimated that a further 80,000 Jews were brought from the surrounding area over the course of the following year and met the same fate. Further victims including ‘Ukrainian citizens of both sexes, prisoners of war, sailors from the Dnieper fleet, and gypsies’ brought the likely total of people killed there to 150,000.