470 years ago, in 1543, King Henry VIII Tudor of England married his sixth and last wife, Katherine Parr. He also allied with the Holy Roman Emperor Charles V Habsburg "of Ghent"; declared war on France; imposed the English administrative grid of counties, shires, boroughs, and House of Commons representatives on Wales; made yet another short-lived treaty with Scotland; burned the three Protestant Windsor Martyrs; and named the composer Thomas Tallis a Gentleman of the Chapel Royal. A busy king, for one so sick and mad.

Also in 1543 a woman named Katherine was born around 1543 in Hartfordshire--in a place called, simply, "West Mill". 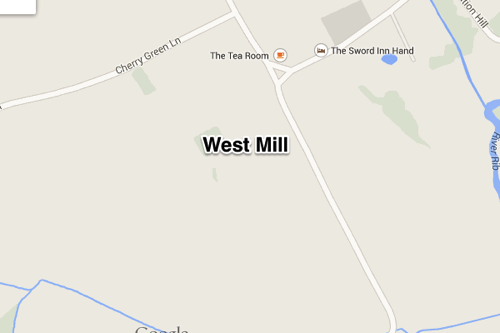 West of what it does not say.

Google Maps tells us that West Mill today has an establishment called The Tea Room, and another called the Sword Inn Hand--demonstrating that no pun is too weak for the Englishmen and Englishwomen of the Home Counties to think it absolutely hilarious. Google Maps tells us that West Mill stands west of the River Rib and the A-10 road beyond, partially shielded from the noise of passing cars taking the alternate route to the M-11 from London to Cambridge by Langley Wood and Norwich Grove. 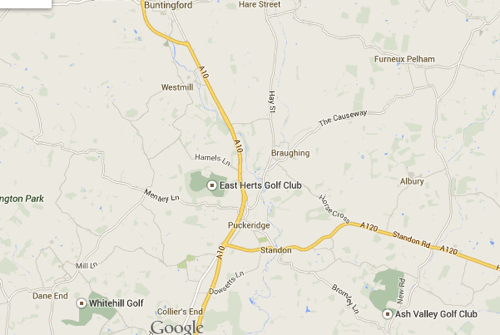 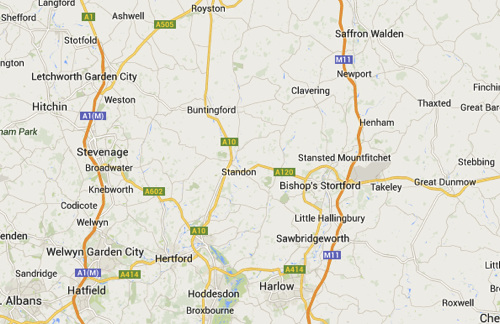 and roughly 20 km west by northwest of Bishop's Stortford nd Stansted Mountfichet, which is better known today as the home of Stansted Airport, London's other other airport… 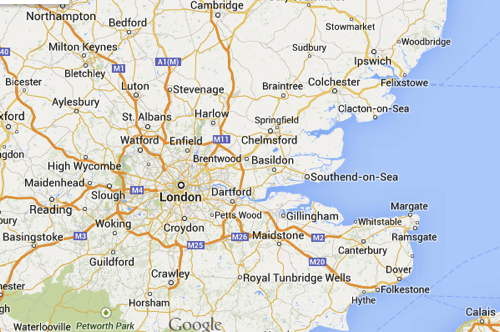 James Richardson the younger married Sarah Clark, and they begat Solomon Richardson. Solomon Richardson moved from Massachusetts and dwelt in New Hampshire, and married Hannah Currier, and they begat the elder of yet another run of James Richardsons, who became a pharmacist, married Laura Clifford, lighted out for the territory in the form of Pittsburgh, PA, and then before the Civil War took the riverboat down the Ohio and up the Mississippi to where the Mississippi and the Missouri diverged, and settled in St. Louis. James Richardson the elder and Laura Clifford begat James Richardson the younger. James Richardson the younger married Florence Wyman, and they begat Florence Wyman Richardson called "Fonnie", as they started a run of eldest-daughter Florences. Florence Wyman Richardson lived in St. Louis, became an aggressive and active suffragette as a teenager, was cut by St. Louis society in spite of her status as a Veiled Prophet Debutante, and has a plaque in her Name in the capital of Missouri, Jefferson City, to this day. Florence Wyman Richardson married Roland Greene Usher, Professor of Early Modern English and Religious History at Washington University in St. Louis. We hope Roland Greene Usher knew much more about what was going on at the court of Henry VIII Tudor than Katherine Duxford--for it would have been very dangerous for her and hers to have known too much. Florence Wyman "Fonnie" Richardson and Roland Greene Usher begat Florence Richardson Usher called "Fonchen", continuing the run of eldest-daughter Florences. Florence Richardson "Fonchen" Usher moved to Massachusetts, took what she described as the most boring course ever, "The British Industrial Revolution", from Roland's brother Abbot, and married William Lord. Florence Richardson "Fonchen" Usher and William Lord moved to South Paris, Maine, and they wanted to continue the run of eldest-daughter Florences--but decided to cut out the middleman, and so they begat Fonya Usher Lord.

Fonya Usher Lord married James V. DeLong, whose great-great-great grandfather James DeLong who, before the Civil War and before he left his bones in Wichita, had used his status as an Ohio judge to free three slaves whose masters had been unwise enough to briefly set them on the north bank of the Ohio River.

And they begat me, James Bradford DeLong.

Katherine Duxford the elder occupies one--or perhaps more than one, who knows?--of the 16,384 ancestral slots in my family tree at the fourteenth generation. The odds are less than 0.3% that any one of my 46 chromosomes is integrally and recognizably one of hers (though as I understand it the odds are overwhelming that some of my DNA-base pairs are). She is just one of a bit less than 16,384 people in 1550 running around northwest Europe (plus, we think, a very few on the Guinea Coast and in North America) who would regard me as "family" in some relevant sense.

Go back not two cycles, 14 generations, but 4 cycles, 28 generations, back to the reign not of Henry VII Tudor but of Richard II Plantagenet "Lion Heart". There are back then 267,845,632 family-tree slots for my ancestors to occupy.

And here is the punchline: We think that the human population of the earth in the eleventh century was 270 million.

Everyone alive in 1080 was not my ancestor. There is, of course, at the 28-generation scale, substantial intermarriage. And those people unlucky enough to have left no descendants who reproduced after 0, 1, 2, or however many generations cannot be among my ancestors. But it is hard to see how any of the 50 million living in Europe in 1080 who has left living descendants today is not my ancestor. And if that doesn't work, how about 610, when Heraclius ascends the throne of the Roman Empire in Constantinople, when there are 4.3 trillion slots in the family tree to occupy? Even the 32 or so of my ancestors who we guess were on the Guinea Coast in 1550 have 8.5 billion slots to fill back in 1610, and the 64 or so of my ancestors among the Native Americans of 1550 have 17 billion.

On a thousand-year time scale, the human race really is just one big unhappy family.

470 years ago, in 1543, King Henry VIII Tudor of England married his sixth and last wife, Katherine Parr. He also allied with the Holy Roman Emperor Charles V Habsburg "of Ghent"; declared war on France; imposed the English administrative grid of counties, shires, boroughs, and House of Commons representatives on Wales; made yet another short-lived treaty with Scotland; burned the three Protestant Windsor Martyrs; and named the composer Thomas Tallis a Gentleman of the Chapel Royal. A busy king, for one so sick and mad.