Grasping Reality by Brad DeLong
Archives Highlighted Previous Edit COVID Market for Man Slavery 20th C. Reading 'Chicago'
Matthew Yglesias: Obama's 2006 debt ceiling speech is worth reading because it is so silly: Noted
Graphs and Charts I Liked in the Second Half of September 2013

Of All the Economists Who Study Equitable Growth, Emmanuel Saez Is Probably the One Whom We Most, in the Words of One of Our Colleagues, "Worship and Adore"

Take a look at:

The most important single chart prepared in economics in the past decade, I think, is this one from Piketty and Saez: 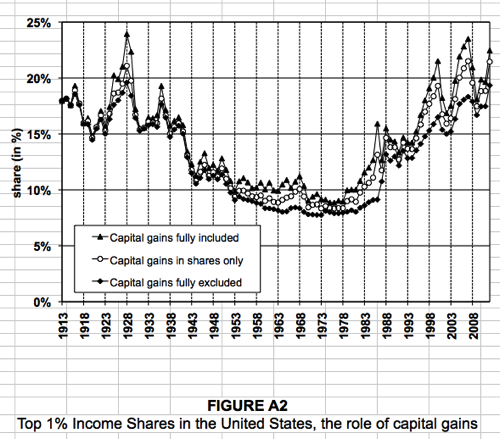 Emmanuel Saez… has distinguished himself by making fundamental contributions concerning critical theoretical and empirical issues within the field of public economics… in five areas… optimal taxes and transfers; the measurement of income and wealth distributions; the measurement of behavioral responses to personal taxation; the taxation of corporate dividends; and retirement saving… [with] the whole considerably greater than the sum of the parts….

The theory of optimal income taxation was largely dormant… [since] Mirrlees (1971)…. Emmanuel has been the most important figure in rejuvenating this… showing that, starting from reasonably realistic optimal income tax problems, one can derive relatively simple relationships between policy prescriptions and measurable economic parameters. In other work, he set about measuring those parameters… straddl[ing] the great divide between theory and empirics…. Mirrlees solved… a dynamic programming problem… [which] yields few general results and delivers a solution that is, for the most part, relatively unintuitive and difficult to interpret…. [Saez] provides a simple, elegant, easily derived, and reasonably general formula for the optimal marginal tax rate at very high income levels… focuses on settings in which the income distribution is unbounded and investigates the limiting value of the optimal marginal tax rate…. if the [uncompensated] elasticity [of earnings] is 0.25 (a value roughly in keeping with Emmanuel’s own findings, discussed below), then the optimal high-income marginal tax rate is 66.7 percent….

Consider a group of low-skill workers who have the potential to earn, say, $10,000 per year…. Suppose an increase in before-tax income from zero to $10,000 increases after-tax income by less than $10,000. Then the tax system does not maximize social welfare. To see why, consider a $1 reduction in the tax burden…. There are three effects… a dollar is transferred from the government to each individual earning $10,000… positive… some individuals respond on the extensive margin by entering the labor force and earning $10,000… their well-being is unchanged… [and] the government collects more revenue… some individuals… respond by working either more or fewer hours…. If labor supply is relatively inelastic on the intensive margin, the first two effects will necessarily outweigh those considerations…. This requirement is quite weak…. Emmanuel… [thus] favors a system with a moderate level of guaranteed income and a marginal tax rate close to zero for the working poor….

Another classic result from the theory of optimal taxation implies that it is inefficient to tax capital income in the long run…. For a model in which taxpayers differ according to their initial wealth holdings and where those differences are exogenous (rather than related to past effort or entrepreneurism), he shows that progressive capital income taxation may be desirable….

The evolution of economic inequality over the course of a country’s development is a topic of considerable importance…. Simon Kuznets (1953, 1955)… [found] that income inequality follows an inverted-U shape as a country develops, first increasing with industrialization and then declining as more and more workers join high-productivity sectors…. Emmanuel teamed with Thomas Piketty to update and extend Kuznets’s classic analysis…. The analysis… is particularly impressive in its painstaking attention to detail, and in the implementation of appropriate adjustments…. The somewhat unfashionable but nevertheless critically important objective… is to provide a detailed and reliable account of facts rather than to implement formal hypothesis tests or measure behavioral parameters, and indeed a fascinating picture emerges. The authors find that top income shares display a U-shaped pattern…. The observed shifts seem too rapid to be explained by technological change, but no formal test of that hypothesis is offered….

The elasticity of taxable income with respect to a household’s marginal tax rate is a critical behavioral parameter…. According to estimates presented in early studies by Lindsey (1987) and Feldstein (1995), taxable income is extremely sensitive to tax rates. However, the reliability of those estimates has been questioned. The main challenge… is to find a good source of variation in tax rates…. Emmanuel has conducted a series of studies… display[ing] impressive resourcefulness and ingenuity in identifying arguably appropriate sources of variation in marginal tax rates, which Emmanuel then uses to estimate behavioral responses. He consistently finds that the response of taxable income to the marginal tax rate is considerably smaller than earlier papers in this literature imply….

Since receiving his Ph.D. from MIT in 1999, Emmanuel Saez has deliberately and creatively pursued a compelling vision for a broad swath of public economics… to a greater extent than that of any other economist of his generation…. Emmanuel has periodically shifted and broadened the scope of his research interests, turning not only to new topics, but also to new methods, such as inventive field experiments. While it is difficult to predict where his inquisitive and incisive intellect will take him, we will no doubt continue to benefifit from his seriousness of purpose and profound insight.

Of All the Economists Who Study Equitable Growth, Emmanuel Saez Is Probably the One Whom We Most, in the Words of One of Our Colleagues, "Worship and Adore"

Take a look at:

The most important single chart prepared in economics in the past decade, I think, is this one from Piketty and Saez: