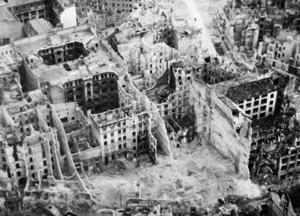 The [second] heavy attack equalled the first in intensity. Though at first we thought it might be weaker, this hope was not realized. The damage was quite as extensive as the night before. In character, too, it resembled its predecessor. It was mainly the inner city that was hit and also the working-class suburbs. Unfortunately only about twenty planes were shot down. Our fighters took a hand but arrived too late and meanwhile the anti-aircraft was forbidden to shoot.

The English therefore got away pretty cheaply with this attack. Conditions in the city are pretty hopeless. The air is filled with smoke and the smell of fires. The Wilhelmplatz and the Wilhelmstrasse present a gruesome picture. There was nothing to be done except to press everybody available into service and wait for rain, which came later in the day.

Gradually we are learning to accustom ourselves again to a primitive standard of living. In the morning in Goering Strasse there is no heat, no light, no water. One can neither shave nor wash. One must get up in the shelter by the light of a burning candle.

I got up at an ungodly hour with my head throbbing worse than ever before. All day long headaches pursue me. What of it? I simply must go to work. I drive straight to the office to wash and shave. I am very much hampered in my work. All telephone lines are down; I can reach the outside world only with the help of messengers. Most of the Reich ministries have been bombed out. Ministers and departmental heads can be found only with difficulty. That makes my work more difcult in some respects, but easier in others.

I had the various Gau [German local] authorities report to me in a conference about the general situation. Critical conflagrations are still raging in some sections of the city, but surface res have stopped.

Fire-fighting units have been summoned in large numbers from other cities as far away as Hamburg and Breslau. These are naturally a great help to us. Petzke has tried to organise food supplies, but it is extremely difficult because the streets have not yet been cleared and supply lorries can’t get into the destroyed areas. I must therefore do everything to get communications started again. The streets must be cleared before repairing the worst damage. For this, however, the manpower available is not sufficient.

The Wehrmacht must therefore help, not only with troops stationed in this defence area, but from others as well. The Wehrmacht supported my plans willingly and promised to furnish me in twenty-four hours with two-and-a-half divisions, or 50,000 men. These 50,000 men are to do nothing except clear the main traffic arteries of the Reich capital so that motorized transport may be resumed, and the most necessary articles of food and necessities conveyed into the bombed-out sections.

I have received detailed reports from various sections. It appears that even more bombs were dropped on the workers’ quarters, especially on Wedding, than in the government section, although this looks like a heap of rubble.

We must now face the problem of evacuation to emergency quarters. About 400,000 people in Berlin are without shelter. Some are lodged in municipal emergency quarters, others must spend their nights in underground tunnels. But I hope in two or three days to solve this problem too.

The first trains of homeless people left the city. But the Berliners have so far refused to make much use of them. Everybody wants to stay here to save the things most needed, and to await further developments. This morning no papers came out. I am doing everything possible to see that at least a few newspapers make their appearance on the streets. The papers with a circulation outside Berlin, especially, must resume publication because of the effect on foreign countries. The Deutscher Verlag remained unhurt, thank God, so that we can have most of the Berlin dailies printed there. Papers appearing twice daily must be reorganized on a once-a-day basis.

What the enemy press is writing about the raids on Berlin simply can’t be beaten for impudence. Their triumphant tone is enough to make one go mad. Accompanying their reports is an ultimatum to the German people to the effect that the end of the Reich capital will have come unless it oers to capitulate. Churchill, Roosevelt, and Stalin allegedly are to meet soon to launch this ultimatum.

The enemy now places his hopes chiey on breaking down our morale. In an appeal to the Berliners I am calling their attention to what is at stake and what these days must prove. Not only the German people but all foreign countries are looking to developments in Berlin with bated breath. Some foreign newspapers have expressed undisguised approval of the Berliners’ morale during these exceedingly heavy air raids.

The [second] heavy attack equalled the first in intensity. Though at first we thought it might be weaker, this hope was not realized. The damage was quite as extensive as the night before. In character, too, it resembled its predecessor. It was mainly the inner city that was hit and also the working-class suburbs. Unfortunately only about twenty planes were shot down. Our fighters took a hand but arrived too late and meanwhile the anti-aircraft was forbidden to shoot.