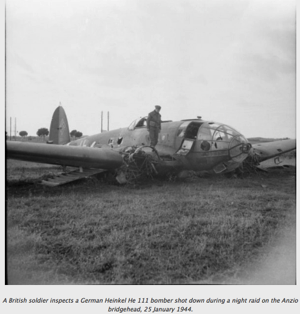 The Guards Brigade, with 23 Field Company under command, were the floating divisional reserve and were brought ashore once the tactical picture could be seen. 23 Field Company passed us on the way to their concentration area and we exchanged cheery waves and the usual soldierly banter.

They had just moved out of sight along the track when we were alarmed by the frightening roar of a German fighter in low level attack. We heard the machine gun fire: the worst happened to our cheery friends of not a moment ago. The column was raked from end to end. It was all over in but a few seconds but 23 Fd. Coy. had a rough reception to the Beachhead. There were some number of dead and wounded.

The next set-back was a storm on D+3 The wind blew up and the waves pounded our beaches destroying the pontoon roadway so no further shipping could be received for the British Sector except through the small port of Anzio itself. This further increased the shipping congestion and made easy pickings for attacking planes despite an array of many barrage balloons and anti-aircraft fire.

Air activity increased and was growing more intense each day, and continued at night time with high level bombing, the enemy airfields being only a few minutes flying-time away, as compared to our own air forces way back somewhere behind Cassino. Low level attack happens so quickly and there always seemed to be aircraft somewhere in the sky but not that many of ours although I did see two US Lightning aircraft doing their best for us shot down into the sea.

The Luftwaffe main action appeared to be directed against shipping crowded into the small bay at Anzio although they were not averse to amusing themselves with anything which moved on the ground!

Despite the attentions of the Luftwaffe the build up on the beach head was going extremely well and better than expected. I can speak now only of the British Sector but doubtless the US on X-Ray beaches were equally satisfied.

My Colonel returned with the tale that he had stood at the front surveying the terrain; all was quiet and the Alban Hills beckoned and it seemed he could have taken his walking stick and strolled towards them. It seemed that nothing in the world could stop a quick advance to seize the Alban Hills at a small price and that our objective would be achieved and consolidated. Everyone was geared up for the big race.

For reasons, some understandable, some incomprehensible, some political and some plainly self-seeking individualism nothing happened. We were waiting on the leash for two days; days when all the advantages of complete surprise were frittered away and time given for German forces to be improvised with the usual German efficiency.

The Guards Brigade, with 23 Field Company under command, were the floating divisional reserve and were brought ashore once the tactical picture could be seen. 23 Field Company passed us on the way to their concentration area and we exchanged cheery waves and the usual soldierly banter.