Looking Back on the Limits of Growth: Tuesday Focus (January 21, 2014) 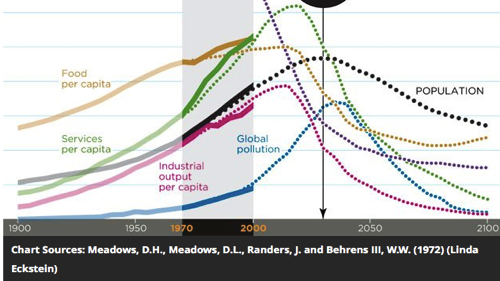 Mark Strauss: Looking Back on The Limits of Growth: "Forty years after the release of the groundbreaking study, were the concerns about overpopulation and the environment correct?...

Australian physicist Graham Turner... revisited perhaps the most groundbreaking academic work of the 1970s, The Limits to Growth.... The business-as-usual scenario estimated that if human beings continued to consume more than nature was capable of providing, global economic collapse and precipitous population decline could occur by 2030.... Prominent economists disagreed with the report’s methodology and conclusions. Yale’s Henry Wallich opposed active intervention, declaring that limiting economic growth too soon would be “consigning billions to permanent poverty.” Turner compared real-world data from 1970 to 2000 with the business-as-usual scenario. He found the predictions nearly matched the facts. “There is a very clear warning bell being rung here,” he says. “We are not on a sustainable trajectory.”

There were four key things in the "Limits to Growth" model:

That the gross qualitative conclusions of the model are baked into its initial structure, and not results of either estimated or even calibrated parameters does not by itself mean that the conclusions of LtG are wrong. But it certainly does not mean that they are right. And I have always interpreted LtG as not a set of forecasts but as an "if this goes on..." conditional forecast assuming neither carbon and other pollution taxes, effective regulation, or the direction of innovative effort toward improving environmental efficiency. The interesting thing in their model is not that it successfully tracks growth before 2020, but the prediction that the stock of pollution's negative effect on productivity is going to bite and bite hard come 2020.

That said, LtG is to a great degree the reason that I am in this business: its model was the first thing I every played with--at an American Association for the Advancement of Science annual meeting in the early 1970s. And after that, I was hooked...

Looking Back on the Limits of Growth: Tuesday Focus (January 21, 2014)

Mark Strauss: Looking Back on The Limits of Growth: "Forty years after the release of the groundbreaking study, were the concerns about overpopulation and the environment correct?...