Grasping Reality with Both Hands
Archives Highlighted Previous Edit COVID Market for Man Slavery 20th C. Reading 'Chicago'
Over at the WCEG: No, I Really Do Not Think That We Were Doomed to the Lesser Depression Plus the Greater Stagnation: I Think Paul Krugman Gets One Wrong Here...: Monday Focus: March 24, 2014
I Still Miss Nelson Polsby: Live from La Farine CXXV: March 24, 2014 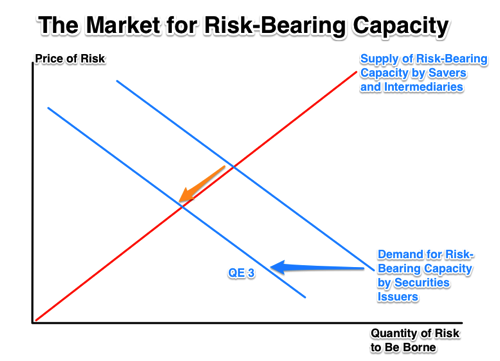 Generic "risk" and "risk bearing capacity", considered as homogeneous quantities that you can break off a lump of and sell to the highest bidder is a terrible way to think about risk. It's precisely the underlying economic philosophy that gave us VaR and the Gaussian copula. I think one can probably quibble all sorts of ways to Sunday about the endogeneity of risk-tolerance and whether there is really gross substitutability between duration risk on long-dated Treasuries and entrepreneurial risks of capital investment project, but the big problem is the initial decision to not only reify "Risk" as a category, but to do so in a way that makes loads of implicit assumptions about its nature. This is the sort of thing Taleb's always going on about.

Economists are always doing this - the first step in the tool kit is to draw a chart like this and it really worries me because it gives the impression of a bit of incremental progress in understanding, while actually unless some serious thinking has gone into the initial assumption of how you're going to convert the quantity of interest into something that you can draw Marshallian cross diagrams of, you're more likely to have made an important mistake that will pollute every other bit of thinking you do on the subject.

I stand my ground: Marshallian cross diagrams are a fine zeroeth-order approximation. 90 times out of 100 things that share a very important common property (i.e., "not safe") and that are lumped under the same general category (i.e., "risky assets") are gross substitutes. 99 times out of 100 when the supply of something goes down, its price goes up. The race is not always to the swift, nor the battle to the strong, but that is the way to bet at even odds.

If you want to say that the Federal Reserve's buying up assets bearing duration risk and so reducing the amount of duration risk the private sector must hold actually increases risk, then: Make the argument. Identify the risk.

The only risk even half-identified is that is that the Federal Reserve might want to shrink the money stock a lot to control inflation, and might be scared to do so because congress and the press might dislike it if it reported capital losses from selling its long-term bonds. But the Federal Reserve could just as well raise interest rates on reserves as sell its bonds. And then there is a vague quarter-identified second line of argument: that congress and the press might dislike it if the Federal Reserve reports that it is paying a fortune to bankers: say, $3 trillion x 4%/year = $120 billion/year.

Seems to me that the best way to reduce that risk--if it exists at all--is for those who fear it not to wring their hands over and over again but instead to point out, repeatedly, that the Federal Reserve has earned more than $500 billion in profits over the course of the financial crisis and Lesser Depression, and that odds are that unwinding its current portfolio prudently and usefully will require that it give some (or maybe all) of that back...