Grasping Reality by Brad DeLong
Archives Highlighted Previous Edit COVID Market for Man Slavery 20th C. Reading 'Chicago'
April 1 Weblogging: Department of "Huh?!": Never in History, So Far as I Am Aware, Has There Ever Been a "Credit Crunch" in Which Production Fell and Prices Rose...
April 1 Weblogging: Brad Johnson: 111 Ways Nate Silver Hire Roger Pielke Jr Doesn’t Like You 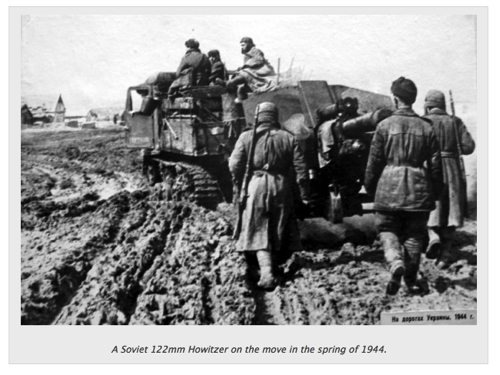 We were now pushing towards the Dnestr. The Germans had to abandon one defensive line after another. Even now, under our pressure the Germans were yielding a trench line ahead of us.

We, the survivors, were so exhausted by the three previous assaults on this line that we weren’t running, but slowly strolling towards the German trench under a bright spring sun. The sun was so hot by eleven o’clock that morning, that we were uncomfortable in our unbuttoned overcoats. The riﬂemen sat down on the edge of the German trench, dangling their legs into it, and lazily wiped their sweating faces with their side caps. To hell with the Germans; let them run away, no one had the strength to chase them again.

… [the telephone line to their artillery behind them was temporarily cut]…

The 45—year—old Mineev from Penza was beyond joy that the line had been ﬁxed; he roared so loudly as he passed my orders to the gun crews that my receiver started to crackle.

Some twenty seconds later, we could hear the rustle of our rounds passing, over our heads, and then dozens of powerful explosions covered the ﬁeld through which the Germans were running. Our riﬂemen immediately stirred and craning their necks, they looked out across the steppe in front of them.

When the dust raised by the explosions dissipated, instead of the running Germans we all saw scattered bodies here and there across the ﬁeld. Some of the bodies remained prone on the grayish—yellow ﬁeld, but some of the survivors among the fallen rose to their feet and started to run for their lives again. There weren’t so many of them, and they clustered in small groups of three or four men. I saw glee on the faces of our riﬂemen; they were so excited that at ﬁrst they couldn’t say a word. Then they all started to cheer at once, looking back at me. Abaev was also happy. He grabbed me by the shoulders and shook me delightedly: ‘Hit that group over there! Look how many of them there are!’

A command to the battery followed, and a shell swept away the ﬂeeing Fritzes. The soldiers kicked up an even louder row, and now each man was trying to point out to me the group of ﬂeeing Germans to shell next. The joy of revenge quickly restored their energy, freed them from the fear that they had experienced in the attacks, and softened their sorrow over the comrades they had lost in the ﬁghting. Watching the enemy die in front of them was like balm for their rattled nerves.

So, the Germans had been destroyed and the riﬂemen had gotten a rest and had cheered up. Abaev ordered his battalion to move out, and we all set out in a rare crowd across the barren, unploughed ﬁeld. Gradually the battalion’s remnants shook out into an attacking line, with Abaev and me running on the left ﬂank. Shtansky could barely keep pace, hampered by the roll of cable on his shoulders and the ﬁeld phone dangling from his hand, which kept swinging and hitting him in the legs. I grabbed the phone so that it was easier for him to run.

Crossing a hillcrest, we spotted a new German trench line in the distance. I thought to myself, ‘How many more of these trenches would we have to take on our road to Berlin?’

The Germans spotted us and a machine-gun burst sprayed us, as if warming up for battle. Then a German howitzer battery, deployed in the open behind the trench, opened ﬁre. We took cover.

Shtansky had already connected the ﬁeld phone to the cable and I called in ﬁre on the German howitzers. They were not dug in; they must have just deployed to ﬁre in a hurry. This made our job easier. Powerful explosions covered the entire battery. It immediately fell silent as the crews took cover next to their guns.

Just in case, I ﬁred another volley at the battery and then I shifted my ﬁre to the German trench. My shells exploded along the whole length of the trench. The German infantry couldn’t withstand it, clambered out of the trench and ﬂed again. I gave them the chance to run away and then hit them again, to ensure they wouldn’t try to return to the trench.

Then I again shifted my ﬁre to the German battery to make sure it wouldn’t resume ﬁring. The ﬂeeing German infantry reached the battery and the surviving artillerymen joined their ﬂight. Abaev immediately ordered the battalion to charge, and we raced after the retreating enemy.

We were now pushing towards the Dnestr. The Germans had to abandon one defensive line after another. Even now, under our pressure the Germans were yielding a trench line ahead of us.