Grasping Reality on TypePad, by Brad DeLong
Archives Highlighted Previous Edit COVID Market for Man Slavery 20th C. Reading 'Chicago'
Noted for Your Morning Procrastination for May 28, 2014
This Is Not a Macroeconomy That Marginal Investors Think Will Be at Full Employment Anytime in the Next Five Years

  Time to update this, as my thinking on a bunch of issues has changed over the past sixteen years. But first, as I think about how to so, let me reprint it...

I construct estimates of world GDP over the very long run by combining estimates of total human populations with largely-Malthusian estimates of levels of real GDP per capita. 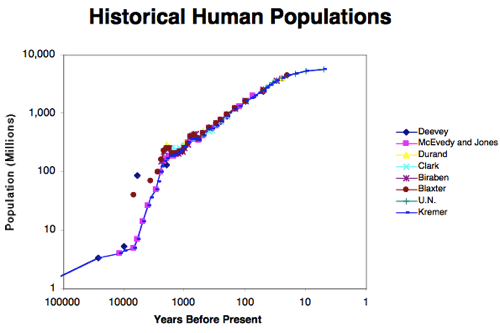 Angus Maddison (1995) has constructed estimates of real GDP per capita for the world from 1820 to 1992. His estimates are best thought of as Laspeyres purchasing power parity estimates in 1990 international dollars. That is, they:

All of these save the last is reasonable—is in fact a way of proceeding vastly preferable to the alternatives. I will return to the last of these later. But first I want to extend Maddison’s estimates backward before 1820.

Economies in the long ago were very different from our economy of today. For one thing, for 95% of the time since the invention of agriculture economies were Malthusian: improvements in productivity and technology showed up not as increases in average standards of living but as increases in population levels at a roughly constant standard of living. For a second, in the long-long ago the pace of invention and innovation can most optimistically be described as glacial—two hundred years to achieve the pace of relative change that we see in twelve months. For a third, arithmetic tells you that in the long-long ago the overwhelming majority of those who are or become well-off have either held on to what their parents bequeathed them or proven successful in zero- or negative-sum redistributional struggles—rather than having found or placed themselves at a key chokepoint of positive-sum productive processes.

This means that, lacking data, we can make data up out of thin air by making inferences from very low pre-1500 population growth rates that material standards of living were back then very close to "subsistence". We know that a preindustrial not-very literate population with ample access to food and resources can and will roughly double every generation: that is the pace of European settler expansion in the Americas, after all. And we know that from 5000 BC to 1345 the average rate of global population growth was 0.07%/year—not the 2.5%/year of normal human biology with ample food and other resources. The inescapable conclusion is that resources were scarce: just barely more than necessary to keep human populations from declining given the socio-cultural institutions then prevailing.

We can check these by consulting the long-run biomedical studies of Rick Steckel (1995), “Stature and the Standard of Living,” Journal of Economic Literature 33:4 (December), pp. 1903-40, and many others. We can use Steckel’s estimates of the relationship between height and income found in a cross-section of people alive today and evidence from past burials to infer what real incomes were in the past. The conclusion is inescapable: people in the preindustrial past were short—very short—with adult males averaging some 63 inches compared to 69 inches either in the pre-agricultural Mesolithic or today. Therefore people in the pre-industrial past were poor—very poor. If they weren’t very poor, they would have fed their children more and better and their children would have grown taller. And they were malnourished compared to us or to their pre-agricultural predecessors: defects in their teeth enamel, iron-deficient, skeletal markers of severe cases of infectious disease, and crippled backs.

Pre-industrial dire poverty lasted late. Even as of 1750 people in Britain, Sweden, and Norway were four full inches shorter than people are today—consistent with an average caloric intake of only some 2000 calories per person per day, many of whom were or were attempting to be engaged in heavy physical labor. And societies in the preindustrial past were stunningly unequal: the upper classes were high and mighty indeed, upper class children growing between four and six inches taller than their working-class peers. Moreover, there are no consistent trends in heights between the invention of agriculture and the coming of the industrial age. Up until the eve of the industrial revolution itself, the dominant human experience since the invention of agriculture had been one of poverty so severe as to produce substantial malnutrition and stunted growth.

It is this experience that makes Jared Diamond conclude that the invention of agriculture was the worst mistake ever made by the human race. 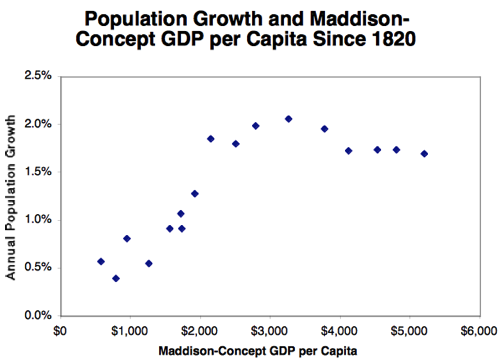 If you are enough of a Malthusian to believe that this tight relationship before World War II is not coincidence but instead reflects a near-linear dependence of the rate of human population growth on the margin between actual production and bio-cultural subsistence, then you can use the fitted relationship between population growth and Maddison-concept GDP per capita to backcast estimates of world GDP per capita before 1820.

I prefer the first alternative (and have used it). But I also report estimates using the second.

A large proportion of our high standard of living today derives not just from our ability to more cheaply and productively manufacture the commodities of 1800, but from our ability to manufacture whole new types of commodities, some of which do a better job of meeting needs that we knew we had back in 1800, and some of which meet needs that were unimagined back in 1800. How much has this change—the fact that we make not just the same goods, but new goods and new types of goods—enhanced our material prosperity? Nordhaus (1997) provides perhaps the most eloquent and sophisticated argument that standard measures—like those of Maddison—that do not take explicit account of these factors grossly understate the rate of economic growth over the past two centuries.

I know that I at least would be extremely unhappy if I were handed my current income, told that I could spend it on goods at current prices, but that I was prohibited from buying anything that was not made before 1800. Yet Maddison’s procedures would implicitly take such a reduction in the range of goods I could purchase as having no effect on my real income or real material standard of living.

But by how much has our power to make new things—not just the same things more efficiently—amplified our material prosperity?

In at least some models of growth in which the set of goods that can be produced expands, the correct measure of real output is proportional to the product of purchasing power (income divided by the average price of a good) and the number of goods that can be produced. As best as I can determine, about three-quarters of world expenditure today is spent on commodities that simply did not exist back in 1800. So I—somewhat arbitrarily—use this to assign an additional fourfold multiplication to output per capita since 1800 in addition to the increases in output per capita calculated by Maddison.

But since this—large—extra adjustment is not to everyone’s taste, I also report the “ex-Nordhaus” series without the “new kinds of goods” adjustment.

They are reported in the table below: 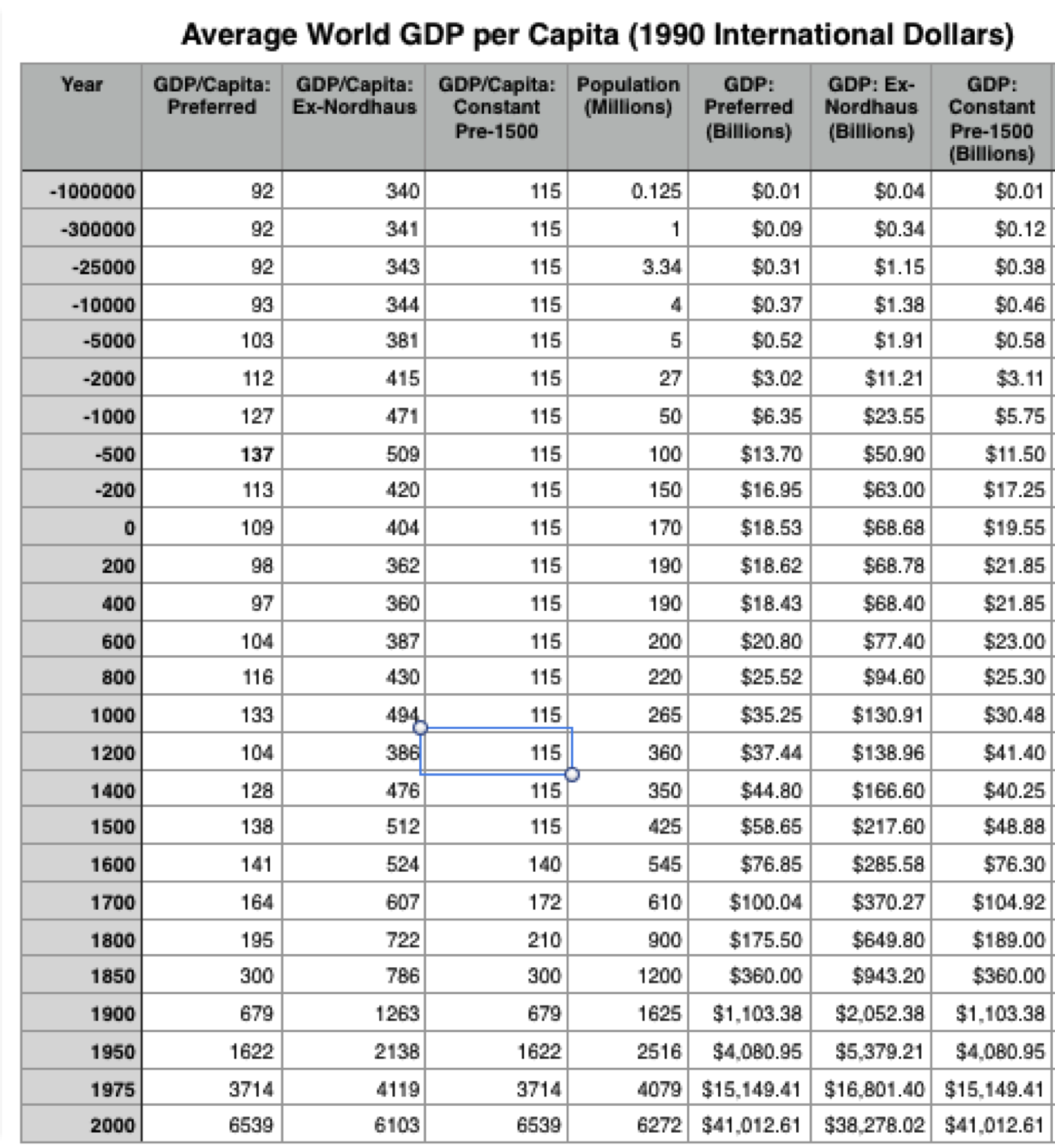   Time to update this, as my thinking on a bunch of issues has changed over the past sixteen years. But first, as I think about how to so, let me reprint it...

I construct estimates of world GDP over the very long run by combining estimates of total human populations with largely-Malthusian estimates of levels of real GDP per capita.