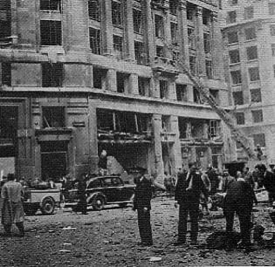 The V-1 tore across southern England at over 350 miles per hour, faster than almost anything the British could put in the air against it, skipping past the barrage balloons’ steel cables that were intended to tear off its wings, outpacing all the efforts of the anti-aircraft gunners to traverse their guns fast enough to blow it out of the sky.

On Aldwych, at the eastern end of the Strand, dozens of people queuing outside the Post Office on the ground floor of Bush House looked skywards. Girls on their lunch break at the Air Ministry at Adastral House opposite, sunbathing on the roof, hurriedly covered up.

In the basement of Australia House, just east of the post office, a young serviceman on leave cued up a shot at the snooker table, oblivious of the looming danger overhead.

Double-decker buses let passengers on and off, lined up just east of Kingsway on the semicircular Aldwych kerb.

A black silhouette against the brilliant blue summer sky, the V-1 began its final dive over South London, somewhere above Waterloo Station, the mechanical growl of its pulse-jet engine suddenly cutting off.

Then the dreadful silence as it fell.

A young man and his friends from the post room at the BBC’s Foreign Service, returning to work at Bush House after spending their lunch hour fooling around by Cleopatra’s Needle, saw the dark shape disappear behind the buildings in front of them. They threw themselves to the ground.

Several young women inside the Air Ministry massed at a window, trying to get a look at the ‘ghastly thing’.

Some bus passengers tried to take cover. Others in the bus and post office queues trusted to luck or God, resignation and indifference in their faces, knowing that if they heard it explode, they would probably still be alive. Helplessly, they watched it fall towards them.

A young woman at the Air Ministry, chatting with a colleague in their boss’s office, saw the flash of the explosion reflected in her friend’s eyes, a split-second before the deafening blast hit them.

The V-1 fell in the middle of the street between Bush House and Adastral House, the home of the Air Ministry, at 2:07 p.m., making a direct hit on one of the city’s main loci of power, the site of the Aldwych holy well, directly on the London ley line.

The device exploded some 40 yards east of the junction of Aldwych and Kingsway, about 40 feet from the Air Ministry offices opposite the east wing of Bush House.

As the Australian serviceman took his snooker shot, the plaster ceiling in the basement of Australia House fell in on the table in front of him.

The Air Ministry’s 10-foot-tall blast walls, made of 18-inch-thick brick, disintegrated immediately, deflecting the force of the explosion up and down the street. Hundreds of panes of glass shattered, blowing razor-sharp splinters through the air. The Air Ministry women watching at the windows were sucked out of Adastral House by the vacuum and dashed to death on the street below. Men and women queuing outside the Post Office were torn to pieces. Shrapnel peppered the facades of Bush House and the Air Ministry like bullets.

A double-decker approaching Aldwych reared up like a frightened horse, settled for a brief moment, then veered over at an angle of 45 degrees, first to one side, then to the other. The roof of the bus in front peeled back, as if cut by a giant tin-opener. The other double-deckers waiting on Aldwych were shattered, their red bodywork ripped to pieces, their passengers torn apart.

Broken panes from all the damaged buildings fell like sleet into the street.

The blast wrecked the facade of the Aldwych Theatre on the corner of Drury Lane, killing an airman at the box-office window as he was buying a ticket for that night’s performance of the anti-totalitarian play There Shall Be No Night by Robert Emmet Sherwood, starring Alfred Lunt and Lynn Fontaine.

Outside Adastral House, a heavy door flew off its hinges, crushing the doorman standing outside.

The blast killed all the sunbathing women on the roof of the Air Ministry. Dust and smoke spewed everywhere.

Part of the casement of the bomb lay burning at the corner of Kingsway. The dead and dying lay scattered in the street. Groans and cries of pain filled the air, though many could not hear them, deafened by the concussion. Some of the victims were naked, their clothing blown from them by the blast.

Aldwych was covered in every direction with debris and broken glass. Banknotes blew in the breeze. A private car stood shattered near the twisted remains of an emergency surface water tank, its 11,000 gallons dispersed, the steel sheets of its walls blown apart.

People walked around dazed, blood pouring from wounds some didn’t know they had, the crunch of broken glass under their feet ubiquitous. One woman walked down seventy-nine steps of an Adastral House stairwell to the street, not realizing her right foot was hanging sideways, feeling no pain, stepping over bodies.

Staff and guests from the nearby Waldorf Hotel ran to help. Ambulances and fire engines sped to the scene. Police directed the injured to a First Aid post in the basement of Bush House, casualties receiving treatment for the next three hours.

Still it was not safe.

One man stepped from a doorway after the blast and was sliced vertically in two by a sheet of falling glass.

A news editor of the Evening Standard who came upon the scene couldn’t take his eyes off the trees. Their leaves had all been replaced by pieces of human flesh.

A Reuters office boy who’d been on one of the double-deckers, running to help, came across a middle-aged woman sitting on the pavement, propped up against a shop front, her face deathly white, cuts all about her face and neck, one shoe missing and her stockings torn. She had auburn hair and was still clutching her handbag. He bent down to see if he could help her. Then a voice behind him said: ‘There’s nothing you can do for her, chum. She’s gone. Died about two or three minutes ago.’

Soon the junction of Kingsway and Aldwych was a sea of stretchers, the occupants all dead. Experienced ambulance workers worked in quick and practised drills to remove the dead and seriously hurt.

When the counting was done, about fifty people were killed, 400 seriously wounded, another 200 lightly injured.

(The above is an excerpt from “The Secret Fire”, describing the June 30, 1944 V-1 blast at Aldwych, London. It is based on eye-witness accounts, official reports and contemporary photographs. Links in the text lead to some of the original source material. To hear audio of a V-1 attack, click here.)

The V-1 tore across southern England at over 350 miles per hour, faster than almost anything the British could put in the air against it, skipping past the barrage balloons’ steel cables that were intended to tear off its wings, outpacing all the efforts of the anti-aircraft gunners to traverse their guns fast enough to blow it out of the sky.

On Aldwych, at the eastern end of the Strand, dozens of people queuing outside the Post Office on the ground floor of Bush House looked skywards. Girls on their lunch break at the Air Ministry at Adastral House opposite, sunbathing on the roof, hurriedly covered up.