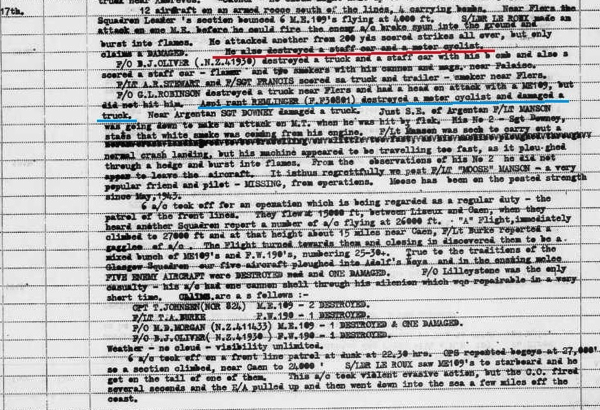 For a field marshal who often drove two hundred miles or more each day to visit his battle commanders, simply venturing beyond La Roche–Guyon had become perilous. All German road convoys and most single vehicles now moved only during the brief midsummer nights; from Normandy to Holland, roadsides were excavated with “funk holes,” slit trenches every sixty yards into which drivers and their passengers could dive....

Fried eggs and brandy awaited Rommel at midafternoon on Monday when the Horch pulled beneath a camouflage net at the I SS Panzer Corps command post in St.-Pierre-sur-Dives, twenty miles southeast of Caen. Nothing he had seen during the day’s travels had lifted his gloom, including strafed Wehrmacht trucks smoldering on the road shoulders. When Kurt Meyer, commander of the 12th SS Panzer, pleaded for Luftwaffe support, Rommel snapped in frustration, “Who do you think you’re talking to? Do you think I drive with my eyes closed through the country?”

During a conference at St.-Pierre with General Sepp Dietrich, the onetime butcher’s apprentice and beer-hall brawler who commanded the panzer corps, Rommel warned that a “large-scale attack” might come as early as that night. British armor and bridging equipment had been seen and heard massing in the Orne valley despite efforts to conceal the noise with artillery barrages. Rommel suggested that layered antitank defenses ten miles deep could blunt the attack and prevent the Allied bridgehead from merging with a second invasion force, still expected in the Pas de Calais. Dietrich agreed that an attack seemed imminent: limestone under the Caen plain acted as a sounding board, amplifying enemy tank sounds for any ear pressed to the ground. “You’re the boss, Herr Feldmarschall,” he said in his Bavarian twang. “I obey only you—whatever it is you’re planning.”

Just after four P.M., Rommel climbed back into the Horch, spreading a map over his knees. Bad news from St.-Lô required him back at La Roche–Guyon. “I’ve won Dietrich over,” he murmured to his aide. The car raced east on Route D-4, past cap-doffing peasants and oxcarts flying white flags. Outside Livarot the driver detoured onto a farm track, then rejoined the main road three miles north of Vimoutiers. On the northern horizon, half a dozen enemy planes could be seen darting like dragonflies. Abruptly the sergeant in the rear seat cried out: two Spitfires had spotted the Horch and were closing from behind, streaking just above the treetops.

Flooring the accelerator, the driver had nearly reached a narrow lane behind a screen of poplar trees when the first gun burst flashed from the lead fighter’s wings at five hundred yards. Slugs stitched the left side of the Horch, mortally wounding the driver in the shoulder and arm. The car careered downhill, slamming against a tree stump before flipping into a ditch.

Flung against the windshield and then from the car, Rommel lay in the roadbed twenty yards behind the wrecked Horch. He was grievously hurt, bleeding from the ears with a fracture at the base of his skull, two more fractures at his left temple, a shattered cheekbone, a damaged left eye, and lacerations of face and scalp. Carried to a nearby gatekeeper’s lodge, he was driven to Livarot after a forty-five-minute search for another car. The local pharmacist, found sipping his evening calvados in a café on the town square, dressed the field marshal’s wounds, injected him with etherated camphor for shock, and pronounced him hopeless.

Still unconscious, Rommel was loaded into another staff car and driven to the Luftwaffe hospital in Bernay, twenty-five miles distant. There he would in fact survive, slowly recuperating in room 9 until stable enough to go home to Lucie in Herrlingen. Not for weeks would Reich propagandists announce that he had been injured in a car wreck, omitting the role of enemy fighters. For Erwin Rommel, the Führer’s marshal, the war was over.

For a field marshal who often drove two hundred miles or more each day to visit his battle commanders, simply venturing beyond La Roche–Guyon had become perilous. All German road convoys and most single vehicles now moved only during the brief midsummer nights; from Normandy to Holland, roadsides were excavated with “funk holes,” slit trenches every sixty yards into which drivers and their passengers could dive....