Over at Equitable Growth: A Note on the Core PCE Inflation Phillips Curve: The Honest Broker for the Week of August 30, 2014

A Note on the Core PCE Inflation Phillips Curve

[This] reduced-form relationship... is highly suggestive and consistent with my claim... that... there is a 2% ceiling to an inflation target corridor... 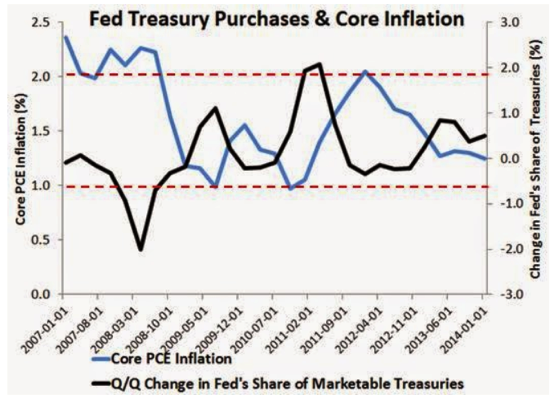 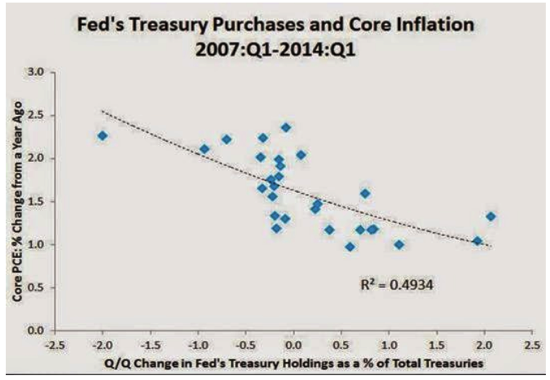 Now the FOMC's preferred inflation measure--the core PCE deflator--is giving signs of crawling up toward above 2%/year again. Thus the FOMC Is no longer discussing whether to stop its programs of asset purchases and start raising interest rates, but rather when to do so. 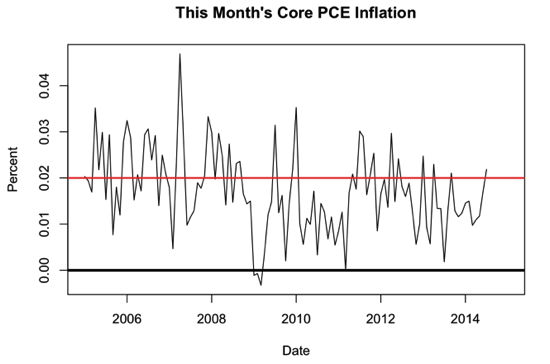 Thus it is time to remind ourselves of just what the U.S. macroeconomic time series on the core PCE deflator has to tell us about the risks and resulting costs of an inflationary spiral should the FOMC retain or even increase its current degree of monetary accomodation for another two or three years or so. And when I look at the time series, I find myself once again driven to the conclusion that what the time series of inflation in th U.S. over the past half century is that the risks and resulting costs of such an inflaitionary spiral are quite low. I cannot see how to get any other conclusion out of the data. 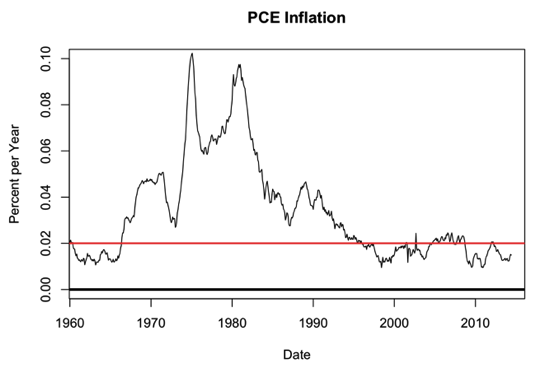 And monthly at an annual rate: The first obvious lesson is that monthly numbers are very noisy estimates of what the underlying PCE core price trend is. The monthly PCE core inflation rates make up a negatively-autocorrelated band 2.5%-points wide around the underlying inflation state of the economy. The second is that, in spite of a great deal of angst about how the Federal Reserve is about to lose its inflation-fighting credibility and risks the imminent-deanchoring of inflation expectations, the time series shows only four run-ups of inflation:

Of these, the fourth was deliberate: Alan Greenspan did not know how much of a negative shock to the real economy would follow in the wake of the October 1987 stock market crash, and he did not want to find out. The first was semi-deliberate: William McChesney Martin understood tht there were risks in acceding to Johnson-administration pressure and while Lyndon Johnson may not have know there were risks his economic advisors certainly did. The second and third saw Arthur Burns and G. William Miller unable to master but rather mastered by events. What, quantitatively, can these four episodes of inflationary breakout--and the symmetric Volcker deflation of the early 1980s and Greenspan opportunistic disinflation of the 1990s tell us about how far the unemployment rate would have to get below the NAIRU for how long to produce how large an inflationary breakout? 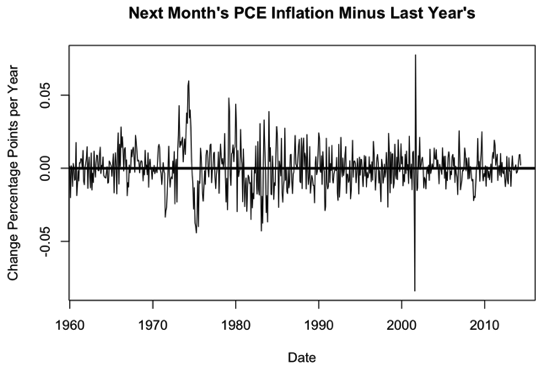 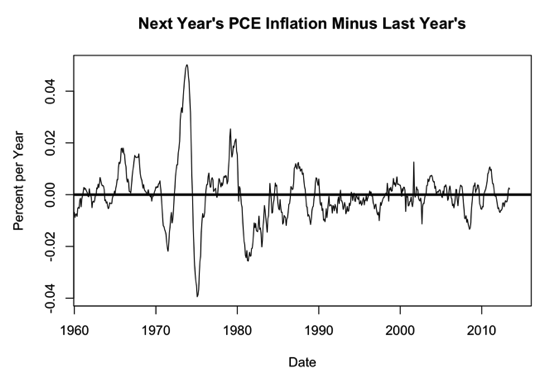 The next step is to consider the simplest possible accelerationist Phillips curves: regressions of the one-year and one-month forward change in annual inflation on the unemployment rate: 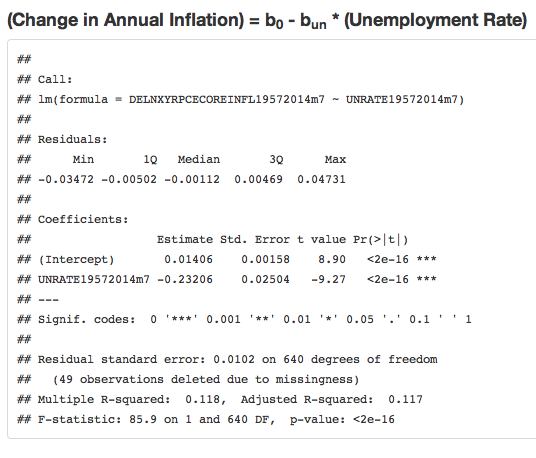 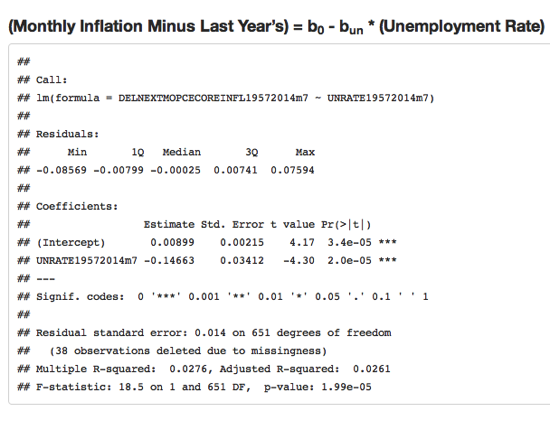 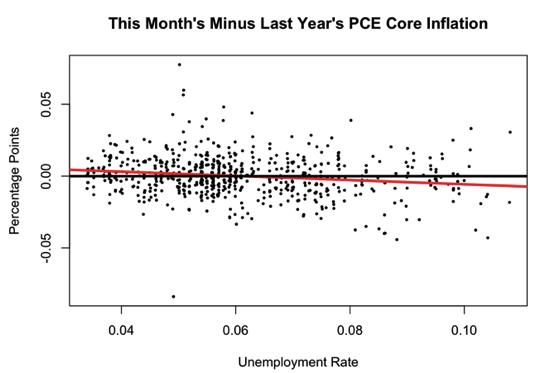 Second, what R spits out are:

Perhaps the problem is omitted variables? Perhaps when the unemployment rate is low other factors omitted from the simplest regression that tend to retard inflation are present, and that the true coefficient on unemployment is much larger. This is certainly a possibility. The obvious variables to add to the regression are (a) measures of supply shocks, (b) some way to account for the fact that the NAIRU is not constant, and (c) richer inflation dynamics. For our purposes we want to leave (a) to one side: the low unemployment of the early 1970s and the high inflation of the first oil-shock period are a significant source of what coefficient the unemployment rate had. Indeed, Milton Friedman used to argue that the OPEC oil-price increases were not a cause of future inflation but a consequence of past easy money and inflation and should be omitted from the determinants of inflation precisely because their inclusion had the effect of reducing the coefficient on unemployment.

As far as (b), all we can say about the NAIRU is that it presumably evolves slowly over time. A polynomial in time thus suggests itself. For (c), the natural variables to add are lags of inflation. And th obvious strategy is to conduct a specification search: add a time trend and powers thereof and add lags of inflation and see what specifications produce a substantially increased unemployment coefficient without obvious overfitting of the time series. Proceeding in steps until we have a fourth-degree polynomial time trend and three annual lags of annual inflation produces an extraordinarily overfitted equation: 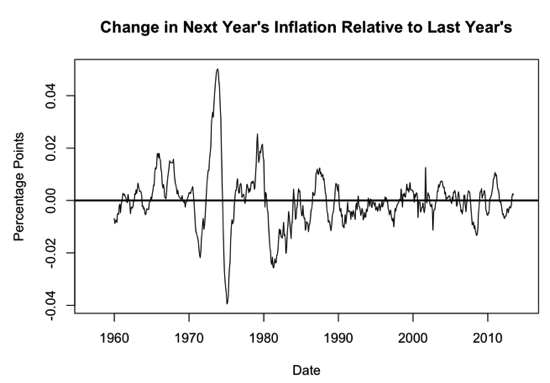 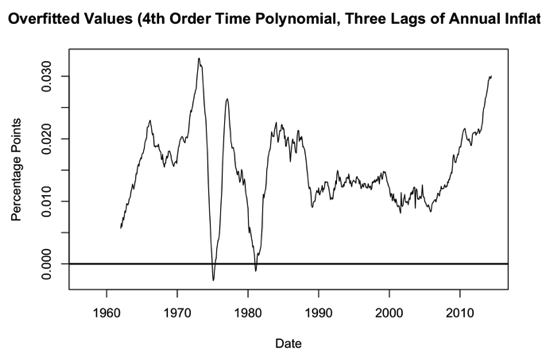 Instead, the argument is made that allowing the unemployment rate to decline below the NAIRU by even a small amount is likely, unless immediate and strong steps are taken to cool the economy and raise unemployment, to cause a sudden loss of confidence in the central bank's commitment to price stability and an immediate and substantial rise in inflation expectations that have suddenly become "de-anchored". For example, consider Philadelphia Federal Reserve Bank President Charles Plosser speaking in the FOMC in April 2008:

I remain concerned, however, about inflation and our calibration of the appropriate level of the fed funds rate consistent with our goals. Inflation readings have abated marginally since our last meeting; but as the Greenbook suggests, there is reason to believe that this is a temporary reprieve... year-over-year CPI inflation was 4 percent in March, and year-over-year PCE inflation was 3.4 percent—well above their 2007 levels.... Markets question our willingness to take actions consistent with sustained and credible price stability. Now, we have often alluded to the idea that near-term weakness will help mitigate some of the inflation pressures. However, I would just like to remind us that this critically depends on inflation expectations remaining well anchored.... I believe that the FOMC’s commitment to price stability remains credible at this time, but just barely...

However, identifying the upward breakouts of inflation not with oil or other supply shocks but with a sudden loss of credibility generating an expectational shift to a different equilibrium runs into a problem--at least if the goal is to caution against policies that might temporarily produce a too-low unemployment rate. The upside breakouts took place in a few isolated time periods when the unemployment rate was 6% or 5%. Most of the time when the unemployment rate was 6% or 5% or even 4% there was little if any upward acceleration in inflation. The most that can be said of this hawkish point of view, even viewing it through the most rose-colored glasses imaginable and reading it in the most favorable light, is that a super-NAIRU unemployment rate insulates against a breakdown of confidence in the central bank's commitment to fighting inflation. But a sub-NAIRU unemployment rate does not reliably trigger a breakdown of such confidence, does not even make such a breakdown more likely than not, and--given the small effect of low-NAIRU unemployment price pressure on inflation--would not seem to be the natural place to look for risks to the central bank's credibility. 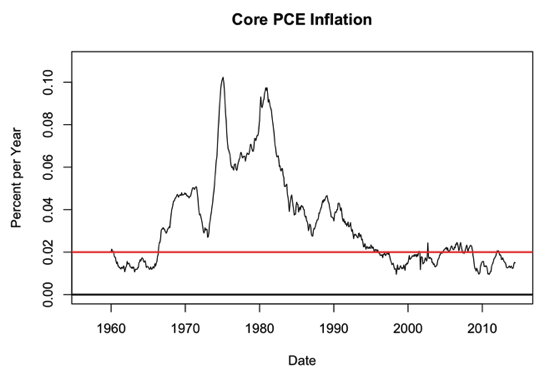 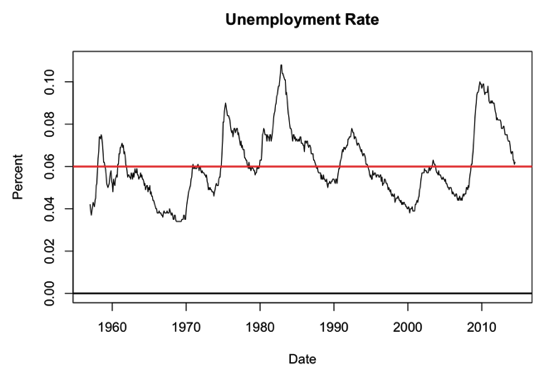 Inflation hawks thus face a benefit-cost question that they need to answer. The benefits for societal welfare of the Federal Reserve's successfully fulfilling its dual mandate are very large. To successfully fulfill the employment part requires tiptoeing unemployment down to the NAIRU. The costs of making a mistake--of overdoing it--are, the computer tells us, small in terms of the amount of undesired and costly inflation produced. Does this not imply a Rikki-Tikki-Tavi "run and find out!" attitude toward monetary policy--that learning more about where the NAIRU is by engaging in policies that allow for information-revealing deviations of unemployment from the NAIRU and inflation from its target is also an important monetary policy goal?

I have asked this question a number of times. I haven't gotten an answer...

2 William T. Dickens (2007): A New Method for Estimating Time Variation in the NAIRU

4 David Beckworth: About the Fed Not Trying Hard Enough To Hit Its Inflation Target)

Over at Equitable Growth: A Note on the Core PCE Inflation Phillips Curve: The Honest Broker for the Week of August 30, 2014

A Note on the Core PCE Inflation Phillips Curve

[This] reduced-form relationship... is highly suggestive and consistent with my claim... that... there is a 2% ceiling to an inflation target corridor...