Liveblogging World War I: August 26, 1914: The Flames of Louvain 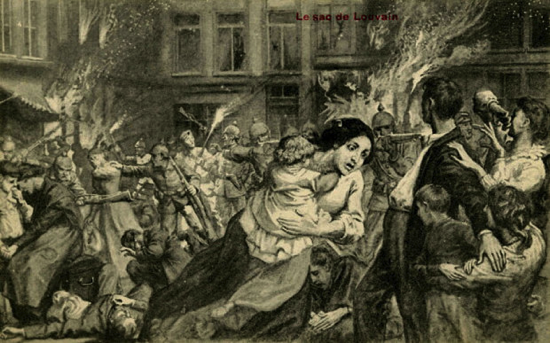 From Barbara Tuchman, The Guns of August:

On August 25 the burning of Louvain began. The medieval city on the road from Liège to Brussels was renowned for its University and incomparable Library, founded in 1426 when Berlin was a clump of wooden huts. Housed in the fourteenth century Clothworkers’ Hall, the Library included among its 230,000 volumes a unique collection of 750 medieval manuscripts and over a thousand incunabula. The façade of the Town Hall, called a “jewel of Gothic art,” was a stone tapestry of carved knights and saints and ladies, lavish even of its kind. In the church of St. Pierre were altar panels by Dierik Bouts and other Flemish masters. The burning and sack of Louvain, accompanied by the invariable shooting of civilians, lasted six days before it was called off as abruptly as it began.

Everything went smoothly when Louvain was first occupied.... The second day was more strained. A German soldier was shot in the leg, allegedly by snipers. The burgomaster urgently repeated his call upon civilians to surrender arms. He and two other officials were arrested as hostages. Executions behind the railroad station became frequent.... General von Luttwitz, the new Governor of Brussels.... Visited in the course of duty by the American and Spanish Ministers, he said to them, “A dreadful thing has occurred at Louvain. Our General there has been shot by the son of the Burgomaster. The population has fired on our troops.” He paused, looked at his visitors, and finished, “And now of course we have to destroy the city.” Mr. Whitlock was to hear so often the story of one or another German general being shot by the son or sometimes the daughter of a burgomaster that it seemed to him the Belgians must have bred a special race of burgomasters’ children like the Assassins of Syria.

Already word of the flames at Louvain had spread. Stunned and weeping refugees driven from the city told of street after street set on fire, of savage looting and continuing arrests and executions. On August 27 Richard Harding Davis, star of the American correspondents who were then in Belgium, made his way to Louvain by troop train. He was kept locked in the railroad car by the Germans, but the fire had by then reached the Boulevard Tirlemont facing the railroad station and he could see “the steady straight columns of flames” rising from the rows of houses. The German soldiers were drunk and wild. One thrust his head through the window of the car where another correspondent, Arno Dosch, was confined and cried: “Three cities razed! Three! There will be more!”

On August 28 Hugh Gibson, First Secretary of the American Legation, accompanied by his Swedish and Mexican colleagues, went to Louvain to see for themselves. Houses with blackened walls and smoldering timbers were still burning; pavements were hot; cinders were everywhere. Dead horses and dead people lay about. One old man, a civilian with a white beard, lay on his back in the sun. Many of the bodies were swollen, evidently dead for several days. Wreckage, furniture, bottles, torn clothing, one wooden shoe were strewn among the ashes. German soldiers of the IXth Reserve Corps, some drunk, some nervous, unhappy, and bloodshot, were routing inhabitants out of the remaining houses so that, as the soldiers told Gibson, the destruction of the city could be completed. They went from house to house, battering down doors, stuffing pockets with cigars, looting valuables, then plying the torch. As the houses were chiefly of brick and stone, the fire did not spread of itself. An officer in charge in one street watched gloomily, smoking a cigar. He was rabid against the Belgians, and kept repeating to Gibson: “We shall wipe it out, not one stone will stand upon another! Kein Stein auf einander!—not one, I tell you. We will teach them to respect Germany. For generations people will come here to see what we have done!” It was the German way of making themselves memorable....

A wireless statement from Berlin issued by the German Embassy in Washington that, following “perfidious” attack by Belgian civilians, “Louvain was punished by the destruction of the city.” Identical with General von Luttwitz’s statement, it showed that Berlin had no wish for the world to misunderstand the nature of the gesture at Louvain....

On August 30 the process of destroying Louvain was terminated. On the same day an official communiqué of the German Foreign Office affirmed that “the entire responsibility for these events rests with the Belgian Government,” not forgetting the usual claim that “women and girls took part in the fight and blinded our wounded, gouging their eyes out.”

Why did the Germans do it? people asked all over the world. “Are you descendants of Goethe or of Attila the Hun?” protested Romain Rolland in a public letter to his former friend Gerhart Hauptmann, Germany’s literary lion. King Albert in conversation with the French Minister thought the mainspring was the German sense of inferiority and jealousy: “These people are envious, unbalanced and ill-tempered. They burned the Library of Louvain simply because it was unique and universally admired”—in other words, a barbarian’s gesture of anger against civilized things.

Valid in part, this explanation overlooked the deliberate use of terror as prescribed by the Kriegsbrauch, “War cannot be conducted merely against the combatants of an enemy state but must seek to destroy the total material and intellectual (geistig) resources of the enemy.” To the world it remained the gesture of a barbarian. The gesture that was intended by the Germans to frighten the world—to induce submission—instead convinced large numbers of people that here was an enemy with whom there could be no settlement and no compromise.

Belgium clarified issues, became to many the “supreme issue” of the war. In America, said a historian of his times looking back, Belgium was the “precipitant” of opinion and Louvain was the climax of Belgium. Matthias Erzberger, soon to be appointed chief of propaganda when that unhappy necessity forced itself upon Germany, found that Belgium “aroused almost the entire world against Germany.” The argument of his counterpropaganda, that Germany’s conduct was justified by military necessity and self-defense, was, as he admitted with a certain wry regret, “insufficient.” It did the Kaiser little good to take the offensive ten days after Louvain in a telegram to President Wilson saying “my heart bleeds” for the sufferings of Belgium caused “as a result of the criminal and barbarous action of the Belgians.” Their resistance, he explained, had been “openly incited” and “carefully organized” by the Belgian government, compelling his generals to take the strongest measures against the “bloodthirsty population.”

It did little good for ninety-three German professors and other intellectuals to issue a Manifesto addressed “To the Civilized World” proclaiming the civilizing effects of German culture and stating, “It is not true that we have criminally violated the neutrality of Belgium.… It is not true that our troops have brutally destroyed Louvain.” However imposing the signatories—Harnack, Sudermann, Humperdinck, Roentgen, Hauptmann—the mute ashes of the Library spoke louder. By the end of August people of the Allied nations were persuaded that they faced an enemy that had to be beaten, a regime that had to be destroyed, a war that must be fought to a finish. On September 4 the British, French, and Russian governments signed the Pact of London engaging themselves “not to conclude peace separately during the present war.” Thereafter issues hardened. The more the Allies declared their purpose to be the defeat of German militarism and the Hohenzollerns, the more Germany declared her undying oath not to lay down arms short of total victory. In reply to President Wilson’s offer to mediate, Bethmann-Hollweg said the Pact of London forced Germany to fight to the limit of her endurance, and therefore Germany would make no proposals as basis for a negotiated peace. The Allies took the same stand. In this position both sides were to remain clamped throughout the war. The deeper both belligerents sank into war and the more lives and treasure they spent, the more determined they became to emerge with some compensating gain.

Liveblogging World War I: August 26, 1914: The Flames of Louvain

From Barbara Tuchman, The Guns of August:

On August 25 the burning of Louvain began. The medieval city on the road from Liège to Brussels was renowned for its University and incomparable Library, founded in 1426 when Berlin was a clump of wooden huts. Housed in the fourteenth century Clothworkers’ Hall, the Library included among its 230,000 volumes a unique collection of 750 medieval manuscripts and over a thousand incunabula. The façade of the Town Hall, called a “jewel of Gothic art,” was a stone tapestry of carved knights and saints and ladies, lavish even of its kind. In the church of St. Pierre were altar panels by Dierik Bouts and other Flemish masters. The burning and sack of Louvain, accompanied by the invariable shooting of civilians, lasted six days before it was called off as abruptly as it began.