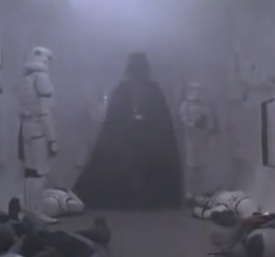 Finally! The Internet comes through with a high-quality DeLong smackdown! Hooray!

...trying to attribute it to bad models or just finding it incomprehensible.... There’s something deeper at work here.... Clinging to beliefs that have been wrong, wrong, wrong for so long--beliefs that would have cost you money if you acted on them--and remember, Eric Cantor, the lost white knight of the Reformicons, did in fact do just that--shows that there is some underlying reason those beliefs are a necessary part of the right-wing identity.

What has to be going on is that the general hatred of government activism, the constant complaint that bureaucrats are taking away your hard-earned wealth and giving it to moochers and looters, carries with it an overwhelming need to see fiat money as theft. Even alleged moderate Republicans do it. It’s a form of obsessive-compulsive political disorder, and not susceptible to rational argument.

And this in turn means that the market monetarists have a hopeless task. James Pethokoukis... needs to ask why that obsession persists... after five years of utter empirical failure...

There are two topics on which, in my experience, conservatives become completely unhinged.... Health care, where the possibility of a successful government-backed program is unacceptable despite the fact that everyone, even America for its seniors, does it, and... monetary policy. It’s time to stop pretending that these are rational discussions, and start looking for the roots of the compulsion.

First, historically, we do see fiat currencies inflated away. Under enormous military pressure from the armies of France and Sweden, and seeing its project of saving the souls of the people of northern Europe by using its army to teach them to be good Catholics, the seventeenth-century Imperial Spain of Felipe IV Habsburg removes the silver from its vellon currency so it can mint more to pay for supplies, and is then surprised to see the resulting inflationary spiral. Since the inflation is undermining the sinews of the Counterreformation, it is thus a theological matter, and responsibility for controlling it is given by King Felipe to... the Spanish Inquisition. Which nobody expects. Certainly not here. An inflationary spiral is, in the grand sweep of history, the most likely failure mode of a fiat monetary system, or one that becomes fiat.

Second, given this history, it makes sense to begin a monetary analysis with a crude quantity theory--most of the time the velocity of money is not that sensitive to interest-rate movements and interest rates do not move that much. And it makes sense to use a crude fiscal theory of the price level to assess the likelihood that political necessity will overwhelm the desire of the Master of Coin to keep his reputation and trigger the inflationary failure mode. Is is true that such a failure is close to zero-sum: creditors lose, and debtors gain and taxpayers gain as much to first-order. But since the creditors are the rich and the rich are the creditors, inflation is something for the rich to fear, and the rich because they are the rich have the megaphones.

Third, one important piece of the puzzle is that this time--or, rather, since the end of World War I--it is different. Before the Great Depression, all previous episodes of commercial and industrial distress had been associated not with low but with high interest rates on safe paper financial assets. They had seen an excess demand for gold or for things as good as gold, by Walras's Law the counterpart of that excess in a general-glut excess supply of currently-produced goods and services, and all interest- and dividend-paying securities going to substantial discounts as those caught short tried to dump their other assets to raise liquidity.

To my knowledge there was no example of a depressed economy at the zero lower bound on safe nominal short-term interest rate before the Great Depression. And to my knowledge there was no theorizing about the possibility of such a configuration before Fisher (1933) and Keynes (1936)--in Wicksell all I can find are worries that the central bank will not reduce the market rate of interest to a natural rate that has fallen, not worries that the central bank cannot rebalance the economy because the natural rate is less than zero. The liquidity trap is something that has been seen three and only three times in world history. Previous episodes of a depressed economy and a shortage of enterprise were better modeled as due to monetary stringency--high interest rates--or a fear of confiscation of entrepreneurial wealth by the powerful.

If, therefore, you were Alissa Zinovievna Rosenbaum--fleeing Bolshevik Russia for New York in 1926, with Lenin and Nicholas II Romanov (for whom the cossacks worked) as your major reference points for what the government did--the ideas that (a) the government's central purpose was to keep everybody shut up and in line and (b) fiat money was a tool it used to steal everybody's stuff through inflation would be quite reasonable. Her claim--"those pieces of paper in your wallet... which should have been gold"--in what Paul Ryan used to say was his favorite speech, that we need to have not just a currency linked to gold but to do all transactions in gold is quite nutty in our day given that the world has changed. But the real offenses in her writings are elsewhere. Cf. Mallory Ortberg:

“I refuse to allow you to live in the world of the mediocre,” Harry said, eyes flashing flint and fire. “You are the only acceptable mate for me. I will hold you in my arms in front of our peers at the Yule Ball. Reconcile yourself to your fate, and wear something red or purple.”

“You’ll wear your hair down,” he said carelessly. “It suits you best that way. I have nothing left to say to you at present. I don’t think I’ll kiss you just yet. Go make whatever feminine preparations you have to make before tomorrow night.”

Given the long-run historical record and given the temporal stickiness of ideas, that conservatives start from theories--the naive mechanical quantity theory of money, the naive fiscal theory of the price level, and a form of Lafferism that sees security of property and low tax rates as the principal requisites of commercial and industrial prosperity--that were by and large adequate for the pre-World War I era but have not been adequate sense is, to me, not surprising. And that it should be difficult to argue them out of these frames of mind is, to me, not surprising.

What is surprising is the professional economists of note and reputation.

In an earlier day, the professional Republican economists had no problem pushing the goldbugs to the margins of, well, Reason magazine and its World War II Revisionism issue--Arthur Burns, Milton Friedman, and Herb Stein disliked the goldbugs of their day even more than Paul Krugman dislikes the goldbugs of ours, for they saw them as not only analytical idiots but also as dangerous in their potential to discredit the Good Old Cause via their ravings. And they argued Republican politicians into a commitment to use at least monetary policy to stabilize aggregate demand at full employment for two generations.

All Republican macroeconomists who want to preserve their reputations and continue to be of note should be strongly behind the market monetarists--should have the backs of James Pethokoukis, Scott Sumner, Ben Bernanke, David Beckworth, Michael Darda, Lars Christenson, Ramesh Ponnuru, and company. Hell, on the question of what Japan should do when its liquidity trap started, Milton Friedman had their back.

So when Krugman writes:

The market monetarists have a hopeless task. James Pethokoukis... needs to ask why that obsession persists... after five years of utter empirical failure...

I think Paul misses the point: Academics of note and reputation do not become such without strong desires to maintain and enhance their reputations and become of greater note by publicly getting it right and getting it right in ways that potentially influence policy. When we think those who seek to be our political masters are getting it wrong, those of us who find ourselves on the Democratic side of the aisle have no problem saying so. Even though we know it is a hopeless Charge of the Light Brigade, we have no problem horsing up. And we have little problem trying to mark our beliefs to market when we get it wrong.

And Let's Concentrate All the Negativity in One Place:

Time to move "Thursday Idiocy" over to the Monday Smackdown! Here's a month's worth:

Finally! The Internet comes through with a high-quality DeLong smackdown! Hooray!

...trying to attribute it to bad models or just finding it incomprehensible.... There’s something deeper at work here.... Clinging to beliefs that have been wrong, wrong, wrong for so long--beliefs that would have cost you money if you acted on them--and remember, Eric Cantor, the lost white knight of the Reformicons, did in fact do just that--shows that there is some underlying reason those beliefs are a necessary part of the right-wing identity.