Over at Equitable Growth: In Which I Make Myself Very Confused About Cyclical Recovery: Monday Focus for August 18, 2014

Over at Equitable Growth: Will somebody please tell me that I have made a gross arithmetic error in what is below, and can be much more optimistic?

Let me start with this graph: 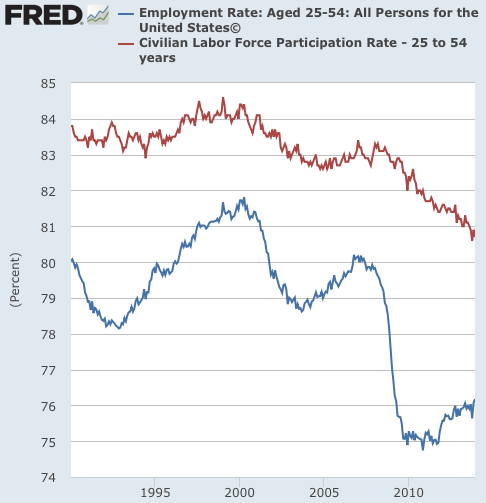 Perhaps a few more 25-54 year olds are in school today than in 2000 or 2007. But only a few. As best as I can see, no more 25-54 year olds are having kids than in 2000 or 2007. And only a very few more 25-54 year olds are staying home to care for elderly relatives than in 2000 or 2007. But I look at this graph--my standard graph for trying to ascertain the cyclical- and hysteresis- state of the U.S. labor market without confusing the demographic effects of population aging with those of the Great Recession Lesser Depression of 2008-?. I see a huge excess decline in participation driven by "hysteresis" that is permanent damage to economic potential produced by the catastrophe. And I see, over and above that, only 1/3 of the work accomplished of cyclical recovery back to a normal spread between prime-aged participation and prime-aged employment.

Thus I really do not understand the triumphalism of the very sharp Steve Braun et al. from the CEA here:

Steve Braun et al.: The decline in the labour force participation in the US: In part due to the vigorous, multi-front response...

...to the economic crisis, the US has enjoyed a sustained economic recovery that has exceeded most contemporaneous and historical financial crisis benchmarks. Up until a year ago, the unemployment rate was falling by an average of 0.7 percentage points per year, roughly tracking the more successful historical experiences, and well exceeding the norm following a financial crisis. In the past year, the pace of the decline in the unemployment rate has doubled. As a result, the official unemployment rate is 83% of the way back to its pre-Global Crisis average. A variety of other indicators--such as broader measures of labour market underutilisation that include discouraged workers or marginally attached workers as well as unemployment rates for different demographic groups--show similar magnitudes of recovery...

Let me stress that this is not senior and not-so-senior White House officials under pressure from political operatives putting as positive a spin on things as they can without actually losing their... No: what I mean to say is this: this is what the CEA's Steven Braun, John Coglianese, Jason Furman, Betsey Stevenson, and Jim Stock actually believe is true about the world--that the labor market is recovering successfully and strongly from the disaster of 2008-9.

The 25-54 data and the economy-wide aging trend-adjusted data used by the CEA appear to be telling us very different things both about the cyclical state of the labor market and about the damage done by hysteresis. How to reconcile? Which is right?

Over at Equitable Growth: In Which I Make Myself Very Confused About Cyclical Recovery: Monday Focus for August 18, 2014

Over at Equitable Growth: Will somebody please tell me that I have made a gross arithmetic error in what is below, and can be much more optimistic?

Let me start with this graph: