Hoisted from the Non-Internet of 70 Years Ago: George Orwell: Confessions of a Book Reviewer 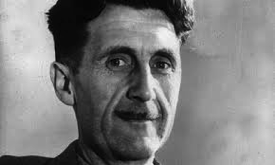 George Orwell: Confessions of a Book Reviewer: "In a cold but stuffy bed-sitting room...

...littered with cigarette ends and half-empty cups of tea, a man in a moth-eaten dressing-gown sits at a rickety table, trying to find room for his typewriter among the piles of dusty papers that surround it. He cannot throw the papers away because the wastepaper basket is already overflowing, and besides, somewhere among the unanswered letters and unpaid bills it is possible that there is a cheque for two guineas which he is nearly certain he forgot to pay into the bank. There are also letters with addresses which ought to be entered in his address book. He has lost his address book, and the thought of looking for it, or indeed of looking for anything, afflicts him with acute suicidal impulses.

He is a man of 35, but looks 50. He is bald, has varicose veins and wears spectacles, or would wear them if his only pair were not chronically lost. If things are normal with him he will be suffering from malnutrition, but if he has recently had a lucky streak he will be suffering from a hangover. At present it is half-past eleven in the morning, and according to his schedule he should have started work two hours ago; but even if he had made any serious effort to start he would have been frustrated by the almost continuous ringing of the telephone bell, the yells of the baby, the rattle of an electric drill out in the street, and the heavy boots of his creditors clumping up and down the stairs. The most recent interruption was the arrival of the second post, which brought him two circulars and an income tax demand printed in red.

Needless to say this person is a writer. He might be a poet, a novelist, or a writer of film scripts or radio features, for all literary people are very much alike, but let us say that he is a book reviewer. Half hidden among the pile of papers is a bulky parcel containing five volumes which his editor has sent with a note suggesting that they "ought to go well together". They arrived four days ago, but for 48 hours the reviewer was prevented by moral paralysis from opening the parcel. Yesterday in a resolute moment he ripped the string off it and found the five volumes to be PALESTINE AT THE CROSS ROADS, SCIENTIFIC DAIRY FARMING, A SHORT HISTORY OF EUROPEAN DEMOCRACY (this one is 680 pages and weighs four pounds), TRIBAL CUSTOMS IN PORTUGUESE EAST AFRICA, and a novel, IT'S NICER LYING DOWN, probably included by mistake. His review--800 words, say--has got to be "in" by midday tomorrow.

Three of these books deal with subjects of which he is so ignorant that he will have to read at least 50 pages if he is to avoid making some howler which will betray him not merely to the author (who of course knows all about the habits of book reviewers), but even to the general reader. By four in the afternoon he will have taken the books out of their wrapping paper but will still be suffering from a nervous inability to open them. The prospect of having to read them, and even the smell of the paper, affects him like the prospect of eating cold ground-rice pudding flavoured with castor oil.

And yet curiously enough his copy will get to the office in time. Somehow it always does get there in time.

At about nine pm his mind will grow relatively clear, and until the small hours he will sit in a room which grows colder and colder, while the cigarette smoke grows thicker and thicker, skipping expertly through one book after another and laying each down with the final comment, "God, what tripe!" In the morning, blear-eyed, surly and unshaven, he will gaze for an hour or two at a blank sheet of paper until the menacing finger of the clock frightens him into action. Then suddenly he will snap into it. All the stale old phrases--"a book that no one should miss", "something memorable on every page", "of special value are the chapters dealing with, etc etc"--will jump into their places like iron filings obeying the magnet, and the review will end up at exactly the right length and with just about three minutes to go. Meanwhile another wad of ill-assorted, unappetising books will have arrived by post. So it goes on. And yet with what high hopes this down-trodden, nerve-racked creature started his career, only a few years ago.

Do I seem to exaggerate? I ask any regular reviewer--anyone who reviews, say, a minimum of 100 books a year--whether he can deny in honesty that his habits and character are such as I have described. Every writer, in any case, is rather that kind of person, but the prolonged, indiscriminate reviewing of books is a quite exceptionally thankless, irritating and exhausting job. It not only involves praising trash--though it does involve that, as I will show in a moment--but constantly INVENTING reactions towards books about which one has no spontaneous feelings whatever.

The reviewer, jaded though he may be, is professionally interested in books, and out of the thousands that appear annually, there are probably fifty or a hundred that he would enjoy writing about. If he is a top-notcher in his profession he may get hold of ten or twenty of them: more probably he gets hold of two or three. The rest of his work, however conscientious he may be in praising or damning, is in essence humbug. He is pouring his immortal spirit down the drain, half a pint at a time.

The great majority of reviews give an inadequate or misleading account of the book that is dealt with. Since the war publishers have been less able than before to twist the tails of literary editors and evoke a paean of praise for every book that they produce, but on the other hand the standard of reviewing has gone down owing to lack of space and other inconveniences. Seeing the results, people sometimes suggest that the solution lies in getting book reviewing out of the hands of hacks. Books on specialised subjects ought to be dealt with by experts, and on the other hand a good deal of reviewing, especially of novels, might well be done by amateurs. Nearly every book is capable of arousing passionate feeling, if it is only a passionate dislike, in some or other reader, whose ideas about it would surely be worth more than those of a bored professional. But, unfortunately, as every editor knows, that kind of thing is very difficult to organise. In practice the editor always finds himself reverting to his team of hacks--his "regulars", as he calls them.

None of this is remediable so long as it is taken for granted that every book deserves to be reviewed. It is almost impossible to mention books in bulk without grossly overpraising the great majority of them. Until one has some kind of professional relationship with books one does not discover how bad the majority of them are. In much more than nine cases out of ten the only objectively truthful criticism would be "This book is worthless", while the truth about the reviewer's own reaction would probably be "This book does not interest me in any way, and I would not write about it unless I were paid to." But the public will not pay to read that kind of thing. Why should they? They want some kind of guide to the books they are asked to read, and they want some kind of evaluation. But as soon as values are mentioned, standards collapse. For if one says--and nearly every reviewer says this kind of thing at least once a week--that KING LEAR is a good play and THE FOUR JUST MEN is a good thriller, what meaning is there in the word "good"?

The best practice, it has always seemed to me, would be simply to ignore the great majority of books and to give very long reviews--1,000 words is a bare minimum--to the few that seem to matter. Short notes of a line or two on forthcoming books can be useful, but the usual middle-length review of about 600 words is bound to be worthless even if the reviewer genuinely wants to write it. Normally he doesn't want to write it, and the week-in, week-out production of snippets soon reduces him to the crushed figure in a dressing-gown whom I described at the beginning of this article.

However, everyone in this world has someone else whom he can look down on, and I must say, from experience of both trades, that the book reviewer is better off than the film critic, who cannot even do his work at home, but has to attend trade shows at eleven in the morning and, with one or two notable exceptions, is expected to sell his honour for a glass of inferior sherry.

Hoisted from the Non-Internet of 70 Years Ago: George Orwell: Confessions of a Book Reviewer

George Orwell: Confessions of a Book Reviewer: "In a cold but stuffy bed-sitting room...

...littered with cigarette ends and half-empty cups of tea, a man in a moth-eaten dressing-gown sits at a rickety table, trying to find room for his typewriter among the piles of dusty papers that surround it. He cannot throw the papers away because the wastepaper basket is already overflowing, and besides, somewhere among the unanswered letters and unpaid bills it is possible that there is a cheque for two guineas which he is nearly certain he forgot to pay into the bank. There are also letters with addresses which ought to be entered in his address book. He has lost his address book, and the thought of looking for it, or indeed of looking for anything, afflicts him with acute suicidal impulses.