Grasping Reality by Brad DeLong
Archives Highlighted Previous Edit COVID Market for Man Slavery 20th C. Reading 'Chicago'
Lunchtime Must-Read: Matt O'Brien: This Is Why the Economy Has Fallen and It Can’t Get Up
For the Weekend: The Ultimate Halloween Movie Is: The Nightmare Before Christmas

A Dialogue on Secular Stagnation: The Honest Broker for the Week of November 7, 2014

Princeps Cogitationis: If I am going to hold down my consulting and speech-making jobs, I need to understand what Larry Summers is talking about here:

Larry Summers: What to do about secular stagnation?

Oeconomicarus: But I thought you read 300 books a year?

Princeps Cogitationis: I read the last chapter of 300 books a year. Then I read three short reviews of each. And then I opine fearlessly. Working through a difficult 3000-word argument and assessing it is not a good use of my time. READ MOAR

Oeconomicarus: So you want me to use my time enlightening you so that you can stamp your brand on my thoughts and make money off of them?

Oeconomicarus: Were you not a literary figure of my rhetorical imagination, and did my Demiurge not have the opportunity to attempt to use twenty first-century communications technologies to leverage this dialogue across an audience global in scope, I would tell you to go where you deserve.

Princeps Cogitationis: But you won't, will you?

Speculatoricus: And you need to start by recognizing that one factor that can raise the economy's current (safe) "natural" interest rate is wild and enthusiastic financial overspeculation--but that such "bubbles" can do so only temporarily and unsustainably...

Princeps Cogitationis: The four of you have lost me.

Princeps Cogitationis: But what is this about bubbles and inflation?

Oeconomicarus: Bubbles are, by their nature, unsustainable--hence not a permanent solution--and disruptive. They are not a good answer to a situation in which the economy's natural rate of interest is less than zero. Price stability--an inflation rate of 2%/year or less--is also a good thing to have: it makes business and other economic decisions more rational. Hence if at low inflation the non-bubble natural rate of interest in money terms gets stuck less than zero, we have a big macroeconomic problem. Larry Summers says that it is, and we do.

Princeps Cogitationis: So what is the way out?

Oeconomicarus: One way is a higher inflation target than our current 2%/year--or actually 1.75%/year--but Larry doesn't like that for some reason. The second way is:

The third way is:

basic social protections so as to maintain spending power... reduc[ing] inequality... redistribut[ing] income towards those with a higher propensity to spend...

Clio: Seems to me that I have heard of these three before...

Oeconomicarus: Yes. The third is basically J.A. Hobson's Imperialism--that an unequal income distribution either required governments to dissipate huge amounts of wealth in conquest and colonization or suffer chronic depression. The second is, in a way, Hayek: that when the long-run rate of profit is not high enough to support the roundabout investments made, overaccumulation is inevitable, and it will then lead to necessary depressions. And the first is basically Friedman's monetarist k%/year money-stock growth rule as a "neutral" monetary policy, with the in petto corollary that the money-stock growth rate has to be high enough to give enough of an incentive to spend liquid assets for monetarism to gain traction...

Princeps Cogitationis: So why is the problem showing up now?

Jean-Baptiste Say: But the market can fix it, right? I mean, as long as there are any ways to durably store purchasing power, all you have to do is push the real interest rate below zero for long enough and demand for investment in such storage will rise to get us to full employment, right?

Oeconomicarus: Not if a lack of trust in financial markets creates a failure to mobilize the economy's risk-bearing capacity...

Thrasymachus: How much would you trust Citigroup or JPMC right now if it told you it had a gold-plated risk-free profitable long-run investment vehicle that you could buy?

Princeps Cogitationis: So if we don't fix this, what happens to us?

Oeconomicarus: Perhaps a 15% reduction in our prosperity relative to what we might have attained, followed by permanently slower growth thereafter:

Potential output has declined almost everywhere and in near lockstep with declines in actual output.... When enough investment is discouraged in physical capital, work effort and new product innovation... 'Lack of Demand creates Lack of Supply'... potential declines, the [natural rate of interest] rises, restoring equilibrium, albeit not a very good one...

Princeps Cogitationis: Suppose I sign up for Summers's "Third Way" policy of radical income redistribution on the first hand, restoration of business confidence and increases in the rate of profit via the government providing various puts to risk-takers and entrepreneurs on the second hand, and aggressive expansionary infrastructure-oriented fiscal policy on the third hand--and it doesn't work. What is wrong with a higher inflation target?

Apollo: I must say, it does seem rather Delphic: Summers says:

Even if the zero interest rate constraint does not literally bind, there is the possibility that the positive interest rate consistent with full employment is not consistent with financial stability. Low nominal and real interest rates... increase risk taking as investors reach for yield, promote irresponsible lending as coupon obligations become very low and easy to meet, and make Ponzi financial structures more attractive as interest rates look low relative to expected growth rates.... Operating with a higher inflation rate target... or... finding ways such as quantitative easing that operate to reduce credit or term premiums... are also likely to increase financial stability risks...

Oeconomicarus: Perhaps it is best to say that effective price stability--the expectation of stable 2%/year inflation--is a very costly, hard-won, and valuable property of a market economy. It greatly reduces inflation-tax distortions and allows for more accurate economic calculation. It should not lightly be thrown away. And there is no reason to throw it away: progressive income redistribution, the proper mobilization of the economy's entrepreneurial risk-bearing capacity, and a proper infrastructure-investment oriented fiscal policy can in all likelihood do the full job by themselves.

Princeps Cogitationis: You have just made me sit through a twenty-minute dialogue! I could have read Summers's original piece in ten minutes!

Princeps Cogitationis: But how do I boil this down to soundbites? I need soundbites--preferably scary ones about risks that make people sit up and pay attention!

Oeconomicarus: Sorry. Can't help you. The secular stagnation income has very high asset prices and healthy profits because the lousy labor market produces a depressed labor share. It's not very good for entrepreneurs. But it's not the kind of thing to scare the currently rich--that is one big reason we are right now in it.

Thrasymachus: If you want soundbites, go over there to practice "We just jumped the gun on our forecast of hyperinflation! Obamacare is collapsing under its own weight! Massive debasement from quantitative easing is still great threat! Lowering interest rates is a cause of deflation! The spike in the VIX this October proves it" with John Cochrane, Niall Ferguson, Douglas Holtz-Eakin and company...

There once was a Fed that did QE II
But got no growth for me and you
It then doubled its bet
Until it tapered out, yet
They still don’t know what to do

Oeconomicarus: (whimpering) But it was QE III, not QE II (sob)... 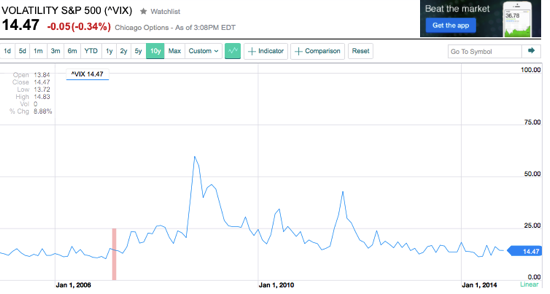 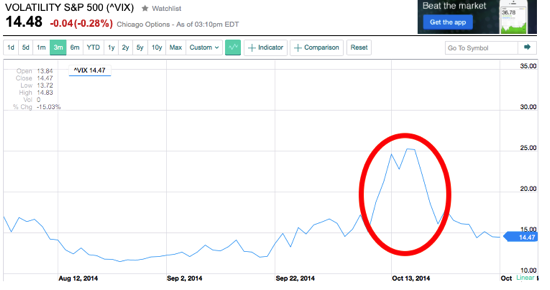 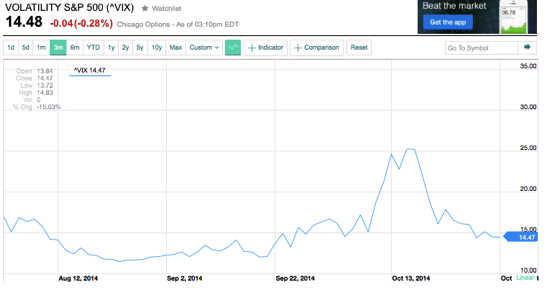 Princeps Cogitationis: But I don't want my soundbites to be wrong! And I do need soundbites!

A Dialogue on Secular Stagnation: The Honest Broker for the Week of November 7, 2014

Princeps Cogitationis: If I am going to hold down my consulting and speech-making jobs, I need to understand what Larry Summers is talking about here:

Larry Summers: What to do about secular stagnation?

Oeconomicarus: But I thought you read 300 books a year?

Princeps Cogitationis: I read the last chapter of 300 books a year. Then I read three short reviews of each. And then I opine fearlessly. Working through a difficult 3000-word argument and assessing it is not a good use of my time. READ MOAR