Over at Equitable Growth: At This Point in Time, a (Larger) National Debt Would Indeed Be a National Blessing: (Late) Tuesday Focus for October 28, 2014 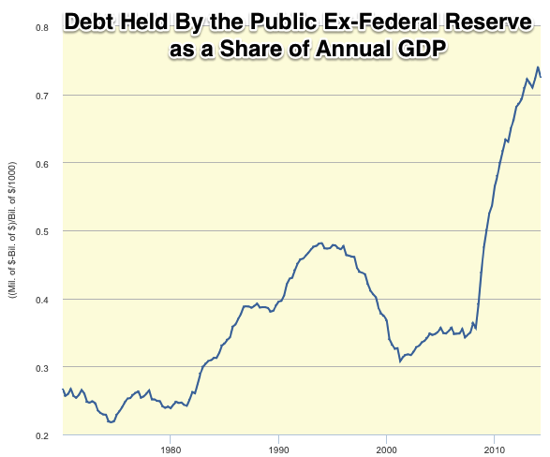 There are two questions that must be answered in the process of figuring out weather having the government borrow money and spend is a good idea:

Back in the Reagan-Bush I years--the steep run-up in the debt-to-annual GDP ratio in the 1980s and the first third of the 1990s: 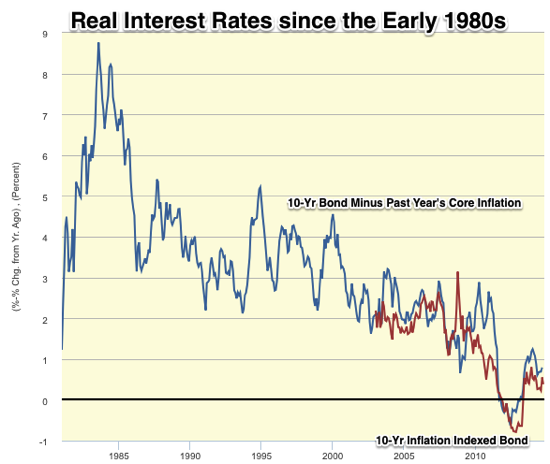 Thus from the perspective of the start of the Clinton administration, back in 1993, a policy of borrow-and-spend looked extremely unwise: money at 5.5%/year in real interest was not cheap, and that number seemed likely to rise further with each year that the government failed to come up with a plan to stabilize the debt-to-annual-GDP ratio. Moreover, with Alan Greenspan promising to reduce the interest rates he controlled in order to keep unemployment at the NAIRU in spite of damping effects on demand exercised by fiscal contraction, it seemed to make a great deal of sense to say that federal-government fiscal policy needed to be based on "classical" principles. And, indeed, it is hard to read the strong high-investment recovery of the mid- and late-1990s--what Janet Yellen and Alan Blinder called The Fabulous Decade--as confirmation that those of us who made Clinton-administration fiscal policy knew what we were doing.

But do we know what we are doing now? Paul Krugman says: clearly not:

Paul Krugman: [Ideology and Investment(http://www.nytimes.com/2014/10/27/opinion/paul-krugman-ideology-and-investment.html): "America used to be a country that built for the future....

...Public projects, from the Erie Canal to the Interstate Highway System.... Incentives to the private sector, like land grants to spur railroad construction.... Broad support for spending that would make us richer. But nowadays we simply won’t invest.... And don’t tell me[, David Brooks,] that the problem is ‘political dysfunction’ or some other weasel phrase that diffuses the blame. Our inability to invest doesn’t reflect something wrong with ‘Washington’; it reflects the destructive ideology that has taken over the Republican Party.... More than seven years have passed since the housing bubble burst, and ever since, America has been awash in savings--or more accurately, desired savings--with nowhere to go.... And the mismatch between desired saving and the willingness to invest has kept the economy depressed.....

There’s an obvious policy response to this situation: public investment. We have huge infrastructure needs, especially in water and transportation, and the federal government can borrow incredibly cheaply--in fact, interest rates on [ten-year] inflation-protected bonds have been negative much of the time (they’re currently just 0.4 percent). So borrowing to build roads, repair sewers and more seems like a no-brainer. But what has actually happened is the reverse. After briefly rising after the Obama stimulus went into effect, public construction spending has plunged. Why?... The federal government could easily have provided aid to the states.... But once the G.O.P. took control of the House, any chance of more money for infrastructure vanished.... You can get a sense of this ideology at work in some of the documents produced by House Republicans under the leadership of Paul Ryan, the chairman of the Budget Committee. For example, a 2011 manifesto titled ‘Spend Less, Owe Less, Grow the Economy’ called for sharp spending cuts even in the face of high unemployment, and dismissed as ‘Keynesian’ the notion that ‘decreasing government outlays for infrastructure lessens government investment.’ (I thought that was just arithmetic, but what do I know?) Or take a Wall Street Journal editorial from the same year titled ‘The Great Misallocators,’ asserting that any money the government spends diverts resources away from the private sector, which would always make better use of those resources. Never mind that the economic models underlying such assertions have failed dramatically in practice, that the people who say such things have been predicting runaway inflation and soaring interest rates year after year and keep being wrong; these aren’t the kind of people who reconsider their views in the light of evidence....

The result, as I said, is that America has turned its back on its own history. We need public investment; at a time of very low interest rates, we could easily afford it. But build we won’t.

By the early 2000s--in large part, I would argue, due to the success of the Clinton administration's fiscal policy in restoring the credibility of the U.S. federal government--it seemed reasonable to project that the U.S. government would be able to borrow for ten years at 3%/year in real terms, a more favorable rate than the Clinton administration was facing in the mid-1990s. However, in the early 2000s the Bush II administration's spending priorities were as misplaced as the Reagan-Bush I administrations: Tax cuts for the rich are very good at making the rich richer without doing anything to spur overall economic growth: it's not that the policy is trickle-down, it's that there is no trickle. Expensive pointless wars that further destabilize the Middle East were even more ill-advised than the Reagan administration's military build-up. And even less wise was increasing federal spending on health care while avoiding even attempting any of the proposed long-term strategies to try to bring America's health-care financing system's performance up so that we were no longer spending $2 on health to get the value other countries got for $1.

And yet it is impossible to get the chattering class in Washington to seriously ask the two questions:

and reach the natural, obvious, inescapable conclusion that right now what the U.S. needs is not a smaller but a larger national debt. Instead, all we hear is:

Why can't Washington do the math?

Over at Equitable Growth: At This Point in Time, a (Larger) National Debt Would Indeed Be a National Blessing: (Late) Tuesday Focus for October 28, 2014

There are two questions that must be answered in the process of figuring out weather having the government borrow money and spend is a good idea:

Back in the Reagan-Bush I years--the steep run-up in the debt-to-annual GDP ratio in the 1980s and the first third of the 1990s: