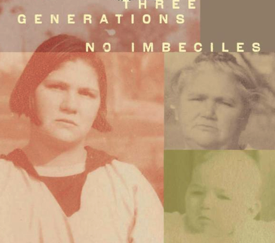 Rather far, I must say, from "to secure these rights governments are instituted..."

We have seen more than once that the public welfare may call upon the best citizens [i.e., young healthy men] for their lives [in war via the draft]. It would be strange if it could not call upon those who already sap the strength of the State for these lesser sacrifices, often not felt to be such by those concerned, in order to prevent our being swamped with incompetence...

Carrie Buck, by R.G. Shelton, her Guardian and Next Friend, Plaintiff in Error, vs. J.H. Bell, Superintendent of the State Colony for Epileptics and Feeble Minded. In Error to the Supreme Court of Appeals of the State of Virginia. May 2, 1927.

Mr. Justice Holmes delivered the opinion of the Court:

This is a writ of error to review a judgment of the Supreme Court of Appeals of the State of Virginia, affirming a judgment of the Circuit Court of Amherst County, by which the defendant in error, the superintendent of the State Colony for Epileptics and Feeble Minded, was ordered to perform the operation of salpingectomy upon Carrie Buck, the plaintiff in error, for the purpose of making her sterile. 143 Va. 310. The case comes here upon the contention that the statute authorizing the judgment is void under the Fourteenth Amendment as denying the plaintiff in error due process of law and equal protection of the laws.

Carrie Buck is a feeble minded white woman who was committed to the State Colony above mentioned in due form. She is the daughter of a feeble minded mother in the same institution, and the mother of an illegitimate feeble minded child. She was eighteen years old at the time of the trial of her case in the Circuit Court, in the latter part of 1924.

An Act of Virginia approved March 20, 1924, recites that the health of the patient and the welfare of society may be promoted in certain cases by the sterilization of mental defectives, under careful safeguard, &c.; that the sterilization may be effected in males by vasectomy and in females by salpingectomy, without serious pain or substantial danger to life; that the Commonwealth is supporting in various institutions many defective persons who if now discharged would become a menace but if incapable of procreating might be discharged with safety and become self-supporting with benefit to themselves and to society; and that experience has shown that heredity plays an important part in the transmission of insanity, imbecility, &c.

The statute then enacts that whenever the superintendent of certain institutions including the above named State Colony shall be of opinion that it is for the best interests of the patients and of society that an inmate under his care should be sexually sterilized, he may have the operation performed upon any patient afflicted with hereditary forms of insanity, imbecility, &c., on complying with the very careful provisions by which the act protects the patients from possible abuse.

The superintendent first presents a petition to the special board of directors of his hospital or colony, stating the fact and the grounds for his opinion, verified by affadavit. Notice of the petition and of the time and place of the hearing in the institution is to be served upon the inmate, and also upon his guardian, and if there is no guardian the superintendent is to apply to the Circuit Court of the County to appoint one. If the inmate is a minor notice also is to be given to his parents if any with a copy of the petition. The board is to see to it that the inmate may attend the hearings if desired by him or his guardian. The evidence is all to be reduced to writing, and after the board has made its order for or against the operation, the superintendent, or the inmate, or the guardian, may appeal to the Circuit Court of the County. The Circuit Court may consider the record of the board and the evidence before it and such other admissible evidence as may be offered, and may affirm, revise, or reverse the order of the board and enter such order as it deems just. Finally any party may apply to the Supreme Court of Appeals, which, if it grants the appeal, is to hear the case upon the record of the trial in the Circuit Court and may enter such order as it thinks the Circuit Court should have entered.

There can be no doubt that so far as procedure is concerned the rights of the patient are most carefully considered, and as every step in this case was taken in scrupulous compliance with the statute and after months of observation, there is no doubt that in that respect the plaintiff in error has had due process of law.

The attack is not upon the procedure but upon the substantive law. It seems to be contended that in no circumstances could such an order be justified. It certainly is contended that the order cannot be justified upon the existing grounds. The judgment finds the facts that have been recited and that Carrie Buck

is the probable potential parent of socially inadequate offspring, likewise afflicted, that she may be sexually sterilized without detriment to her general health and that her welfare and that of society will be promoted by her sterilization...

and thereupon make the order. In view of the general declarations of the legislature and the specific findings of the Court obviously we cannot say as matter of law that the grounds do not exist, and if they exist they justify the result.

We have seen more than once that the public welfare may call upon the best citizens for their lives. It would be strange if it could not call upon those who already sap the strength of the State for these lesser sacrifices, often not felt to be such by those concerned, in order to prevent our being swamped with incompetence.

It is better for all the world, if instead of waiting to execute degenerate offspring for crime, or to let them starve for their imbecility, society can prevent those who are manifestly unfit from continuing their kind. The principle that sustains compulsory vaccination is broad enough to cover cutting the Fallopian tubes. Jacobson v. Massachusetts, 197 U.S. 11.

Three generations of imbeciles are enough.

But, it is said, however it might be if this reasoning were applied generally, it fails when it is confined to the small number who are in the institutions named and is not applied to the multitudes outside. It is the usual last resort of constitutional arguments to point out shortcomings of this sort.

But the answer is that law does all that is needed when it does all that it can, indicates a policy, applies it to all within the lines, and seeks to bring within the lines all similarly situated so far and so fast as its means allow. Of course so far as the operations enable those who otherwise must be kept confined to be returned to the world, and thus open the asylum to others, the equality aimed at will be more nearly reached.

Rather far, I must say, from "to secure these rights governments are instituted..."

We have seen more than once that the public welfare may call upon the best citizens [i.e., young healthy men] for their lives [in war via the draft]. It would be strange if it could not call upon those who already sap the strength of the State for these lesser sacrifices, often not felt to be such by those concerned, in order to prevent our being swamped with incompetence...