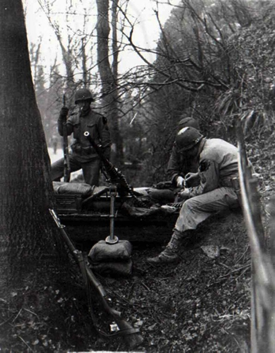 It was in Malmedy that Sergeant Francis Sherman ‘Frank’ Currey in the 3rd platoon of Company K, 120th Infantry Regiment, 30th Infantry Division found himself in charge in the early hours of the 21st December.

The attack towards K Company’s roadblock began as an infantry attack. There was no artillery preparation, in fact, no artillery support at all. When the advancing enemy infantry got within three or four hundred yards of the roadblock’s outpost, they were discovered and fired upon.

A spirited firefight immediately developed. Under the cover of machine gun and direct fire, the attackers advanced and took possession of a house in the vicinity of the crewless TD gun, about 200 yards from the positions of the defending platoon.

The enemy made this house into a strong point and built up a line east thereof. Practically all of the hostile infantrymen carried automatic weapons.

After about six hours, during which the men of Company K fought off all efforts of the German infantry to overrun their position, the supporting hostile tanks moved forward up the road in an effort to break the resistance, which the infantry had been unable to do.

We were guarding a bridge, a very vital bridge,

About four o’clock the next morning, here come the German tanks almost bumper to bumper, an armored column. One of them pulled right up to our position, and I had a Browning automatic rifle at the time, and the officer leading the column was up in the turret, and I fired at him, buttoned him up, and the others scattered.

We withdrew to this factory. It had a lot of windows in it, and we were firing from a window. ‘Move, fire, move, fire’ And made them think that we were a lot more than we actually were.

[Under cover of darkness, Sergeant Currey and his men escaped in an abandoned jeep.]

Now, visualize, five young men, the oldest 21-years-old, in the middle of Belgium, when it was dark. We couldn’t use lights on the jeep. We were surrounded by Germans. That’s youth!

See Hurleyville website for more. Currey was awarded the Medal of Honor, the citation for which describes the action in much more detail:

He was an automatic rifleman with the 3d Platoon defending a strong point near Malmedy, Belgium, on 21 December 1944, when the enemy launched a powerful attack.

Overrunning tank destroyers and antitank guns located near the strong point, German tanks advanced to the 3d Platoon’s position, and, after prolonged fighting, forced the withdrawal of this group to a nearby factory.

Sgt. Currey found a bazooka in the building and crossed the street to secure rockets meanwhile enduring intense fire from enemy tanks and hostile infantrymen who had taken up a position at a house a short distance away. In the face of small-arms, machinegun, and artillery fire, he, with a companion, knocked out a tank with 1 shot.

Moving to another position, he observed 3 Germans in the doorway of an enemy-held house. He killed or wounded all 3 with his automatic rifle. He emerged from cover and advanced alone to within 50 yards of the house, intent on wrecking it with rockets.

Covered by friendly fire, he stood erect, and fired a shot which knocked down half of 1 wall. While in this forward position, he observed 5 Americans who had been pinned down for hours by fire from the house and 3 tanks. Realizing that they could not escape until the enemy tank and infantry guns had been silenced, Sgt. Currey crossed the street to a vehicle, where he procured an armful of antitank grenades. These he launched while under heavy enemy fire, driving the tankmen from the vehicles into the house.

He then climbed onto a half-track in full view of the Germans and fired a machinegun at the house. Once again changing his position, he manned another machinegun whose crew had been killed; under his covering fire the 5 soldiers were able to retire to safety.

Deprived of tanks and with heavy infantry casualties, the enemy was forced to withdraw. Through his extensive knowledge of weapons and by his heroic and repeated braving of murderous enemy fire, Sgt. Currey was greatly responsible for inflicting heavy losses in men and material on the enemy, for rescuing 5 comrades, 2 of whom were wounded, and for stemming an attack which threatened to flank his battalion’s position.

It was in Malmedy that Sergeant Francis Sherman ‘Frank’ Currey in the 3rd platoon of Company K, 120th Infantry Regiment, 30th Infantry Division found himself in charge in the early hours of the 21st December.

The attack towards K Company’s roadblock began as an infantry attack. There was no artillery preparation, in fact, no artillery support at all. When the advancing enemy infantry got within three or four hundred yards of the roadblock’s outpost, they were discovered and fired upon.