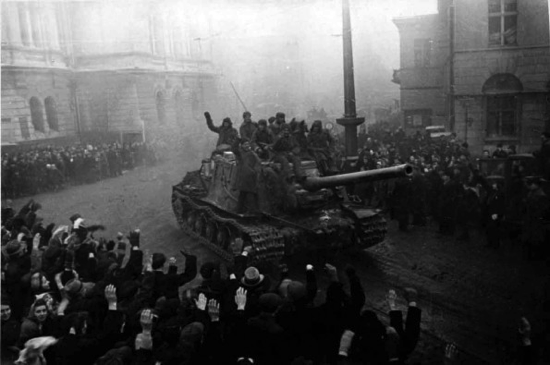 On the 24th January they reached the river Oder, the modern day border between Poland and Germany, they were now only 60 miles from Berlin. There was post war controversy between Soviet Generals as to whether they should have pushed on to Berlin at this point and smashed the Germans while they were in disarray. There were still very substantial German formations on their flanks, however, which led to the order to halt and consolidate.

The dramatic advances again raised expectations that the war might end very soon. The BBC, the principal source of ‘independent’ information for most of Europe issued a memo about not raising expectations. They contented themselves with quoting from earlier Nazi propaganda, when the German claim was that the war was being fought well away from Germany:

September 3rd, 1943: ‘If we have to fight hard in the East today, at least we do not have to do so at Breslau but 1,000 kilometers from our frontier.’

August 14th, 1943: ‘It is all too easily forgotten that this battle is not being fought in the suburbs of Tilsit or on the banks of the Oder but on the Upper Donetz and in the suburbs of Leningrad. That is the way of looking at things which we prefer.’

Twenty one year old Lieutenant Evgeni Bessonov was an officer in a Guards Unit of the Red Army. He commanded a platoon of men who rode on the Soviet tanks, fighting as infantry when the situation arose. From the 12th January to the 24th-25th they advanced over 600 kilometres, as they punched through the German resistance not caring whether they overtook retreating columns of Germans:

It was good that the enemy’s air force was not there, and we could march both during day and night. As a rule, during the night we would stop once for two or three hours. We tried to get into houses, into a warm place.

There were almost no stops during the day, and even if we had them, breaks were short, no more than one hour. It was rare that we stopped for a long time to warm the soldiers. We only had food twice a day — morning and evening; if the kitchen was there, the food was hot.

Thus, in order not to be hungry during the day, we made do with trophies — mostly German tinned meat and hard tack. Sometimes we saw small loaves of black bread in plastic; the bread was not too hard, but it was tasteless. We did not really like it, but we ate it anyway. Our Russian bread would also freeze in our back-packs in the frost, if you did not eat it on time.

There were cases when I slept so well during the night that I did not even wake up during the small night clashes with the Germans that occurred in some villages. The soldiers sympathized with me and did not wake me up; the squad leaders could manage by themselves — if necessary, they fired on the move.

During the day we sometimes ran into horse-drawn supply columns. All the personnel and their escorts were dressed in German uniforms. Among them there were all nationalities except for the Russians — Kalmyks, Uzbeks, Tatars,Kazakhs, people from the Caucasus and Poles. Apparently, the Germans did not trust the Russians and did not ‘allow‘ them to serve in supply units.

We had different attitudes towards those men, but we did not show cruelty, did not abuse them and did not execute them. I think once we fought a supply column of Kalmyks and soldiers of other nationalities, as they tried to resist — they lost their heads and opened fire on us, and my soldiers did not like it.

War is war. I never saw Russians or Ukrainians in supply columns, but met Vlasov’s men in battle many times. [Vlasov was the Soviet General who had switched sides after being captured by the Germans in 1942 and formed the anti-Soviet Russian Liberation Army from Russian POWs.] They always put up stubborn resistance and besides that shouted all kinds of offensive curses at us. They knew that there would be no mercy, and we did not give it — we never took them prisoners. Besides, they never surrendered, unlike the Germans.

Retreating Fritzes entered the village after we left and burnt the tank in battle. Savkin himself was killed, along with his men, among them Bespalyuk, Polischuk and others… That’s how it was, there were no major engagements, but platoons had fewer and fewer soldiers left…

We went through the whole of Poland fighting constantly. Sometimes the enemy put up stubborn resistance, while sometimes our arrival in a city or a village was totally unexpected for the Germans.

One village still had electric lights and even a policeman on a street crossing when we drove in. At first he did not understand which tanks these were, but as soon as we drove closer, he realized who we were and ran away from his post, he was off like a flash. I have already mentioned that Germans run very fast.

See Evgeni Bessonov: Tank Rider: Into the Reich with the Red Army.

On the 24th January they reached the river Oder, the modern day border between Poland and Germany, they were now only 60 miles from Berlin. There was post war controversy between Soviet Generals as to whether they should have pushed on to Berlin at this point and smashed the Germans while they were in disarray. There were still very substantial German formations on their flanks, however, which led to the order to halt and consolidate.