John Harwood's claim that Dean Baquet's first priority is turning the New York Times into a trusted information intermediary runs on to and then sinks offshore of the reef that is Thomas Friedman:

Tom Friedman, in #Davos, proves once again he is the emperor of the idiots. This got spontaneous applause! pic.twitter.com/S9TTB3hVIZ

...and others over in Switzerland for some kind of explanation, because the more I stare at this passage, the less I understand it. What was the context? Was he sending some kind of signal to his alien commander?

I pulled up Google translate and ran the passage through a series of languages: from English into Slovenian, then into Afrikaans, and on into Basque and Lithuanian and Croatian and a few others before routing it back into English. This is what came out:

Arab Spring nijenedostatak width, but because of the lack of human understanding , which wrought such ad Gera is only when someone is late for breakfast, and hands, thank you for the delay.

If the Arab Spring is 15 minutes late for breakfast, mankind should have enough understanding to say thank you. But it doesn't, and not just because of the Arabs' lack of bandwidth.

Or something. Free 'I Heart Confusing!' T-shirt to the reader with the best translation?

Felix Salmon: What on earth was Thomas Friedman talking about?: "The answer to the first question is that yes...

...it is absolutely real. Tom Friedman really did say this, and it really did elicit a hearty round of applause from the assembled plutocrats.

The answer to the second question is that I don’t honestly know what Tom Friedman was talking about. But at least I can give you a bit of context. Tom Friedman was sitting on a panel at a lunch.... Benioff had already explained... that he is so in awe of Tom Friedman’s intelligence that he felt Tom Friedman should not merely be the moderator of the discussion; he should be a fully-fledged panelist. So Benioff moderated.... Friedman had just explained that he is writing a book called ‘The World is Fast’, a sequel to a previous book of his called ‘The World is Flat’.... The title of the final chapter of his new book is ‘Thank You for Being Late’....

Being important CEO types, Tom Friedman’s friends are sometimes 15 minutes late for their breakfast meetings. And when that happens, Tom Friedman thanks his friend for being late, since his guest’s tardiness has given him 15 minutes of peace and quiet, during which he can think peacefully.... What has any of this got to do with the Arab Spring? That, I’m afraid, I’m going to have to leave as an exercise for the reader. Because I have no idea.

of the longest-running play in the modern Middle East, which, if I were to give it a title, would be called:

Who owns this hotel? Can the Jews have a room? And shouldn’t we blow up the bar and replace it with a mosque?

...I feel as if the president is presenting us with a beautiful carved mahogany table--a big, bold, gutsy vision. But if you look underneath, you discover that this table has only one leg.

Tom Friedman: Imbalances of Power: "The next president will have to...

...manage these new rising states and these new rising individuals and networks, while wearing the straightjacket left in the Oval Office by Mr. Bush. ‘Call it the triple deficit,’ said Mr. Rothkopf:

A fiscal deficit that will soon have us choosing between rationed health care, sufficient education, adequate infrastructure and traditional levels of defense spending, a trade deficit that has us borrowing from our rivals to the point of real vulnerability, and a geopolitical deficit that is a legacy of Iraq, which may result in hesitancy to take strong stands where we must.

Thomas Friedman: If Not Now, When?: "What’s unfolding in the Arab world today...

...is the mother of all wake-up calls. And what the voice on the other end of the line is telling us is clear as a bell:

America, you have built your house at the foot of a volcano. That volcano is now spewing lava from different cracks and is rumbling like it’s going to blow. Move your house! 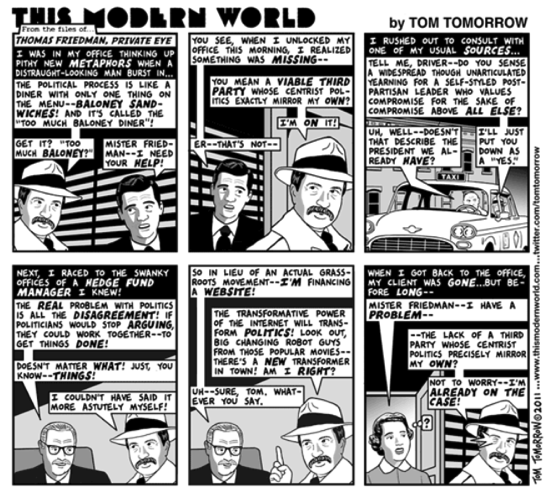 Tom Friedman: "I think [the Iraq War] was: unquestionably worth doing, Charlie. And I think that looking back that I now certainly feel I understand what the war was about. And it’s interesting to talk about it here in Silicon Valley because, I think, looking back at the 1990s I can identify there are actually three bubbles of the 1990s:

The terrorism bubble that built up over the 1990s said flying airplanes into the World Trade Center, that’s Ok. Wrapping yourself with dynamite and blowing up Israelis in the pizza parlour, that’s Ok. Because we’re weak and they’re strong and the weak have a different morality. Having your preachers say that’s OK? That’s OK. Having your charities raise money for people who do these kinds of things? That’s OK. And having your press call people who do these kind of things martyrs? That’s OK.

And that built up as a bubble, Charlie. And 9/11 to me was the peak of that bubble. And what we learned on 9/11 in a gut way was that bubble was a fundamental threat to our society because there is no wall high enough no INS agent smart enough no metal detector efficient enough to protect an open society from people motivated by that bubble.

And what we needed to do was to go over to that part of the world and burst that bubble. We needed to go over there basically uhm, and, uh, uhm take out a very big stick, right in the heart of that world and burst that bubble. And there was only one way to do it because part of that bubble said ‘we’ve got you’ this bubble is actually going to level the balance of power between us and you because we don’t care about life, we’re ready to sacrifice and all you care about is your stock options and your hummers. And what they needed to see was American boys and girls going from house to house, from Basra to Baghdad and basically saying:

Which part of this sentence don't you understand. You don't think that we care about our open society? You think this [terrorism] bubble fantasy, we're just going to let it grow? Well, suck on this!

John Harwood's claim that Dean Baquet's first priority is turning the New York Times into a trusted information intermediary runs on to and then sinks offshore of the reef that is Thomas Friedman:

Tom Friedman, in #Davos, proves once again he is the emperor of the idiots. This got spontaneous applause! pic.twitter.com/S9TTB3hVIZ