I assure you that I have found some high-quality DeLong smackdowns on the internet, and they are in the pipeline.

Nevertheless, this past week I managed to man-up and read another page of chapter 11 of David Graeber's Debt: The First 5000 Mistakes (The backstory).

I am hoping that there will come a day on which the first new kindle screen from Graeber I read does not have egregious errors of fact or analysis on it.

I pray that there may come such a day.

But today is not that day: 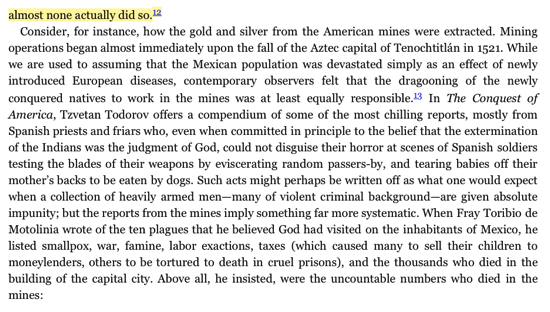 There is only one single error on this kindle screen.

Graeber is 100% correct in describing the Spanish conquest of the Americas as a brutal, ugly, terror-filled genocide, wreaked predominantly by disease but secondarily by violence and tertiarily by disruption-induced famine.

But there is this phrase Graeber inserts in the middle:

priests and friars... committed in principle to the belief that the extermination of the Indians was the judgment of God...

There were priests and friars who believed that the plagues that brought so much depopulation were the judgment of God (not necessarily that depopulation was good in itself, but that it was part of what would in retrospect with full knowledge be seen as a necessary part of an infinitely-greater good).

I am aware of none.

Even Sepulveda would not go further than to argue that it was good not that the Amerindians should be exterminated, but merely that they should be enslaved, because:

And Supelveda was an outlier.

The consensus of the Catholic Church in the sixteenth century was not that the extermination of the Amerindians was the judgment of God, but rather that, as Paul III wrote in Sublimus Dei:

The enemy of the human race... invented a means never before heard of... [to] hinder the preaching of God's word of Salvation to the people: he inspired his satellites... to publish abroad that the Indians... should be treated as dumb brutes created for our service, pretending that they are incapable of receiving the Catholic Faith.

We, who, though unworthy, exercise on earth the power of our Lord and seek with all our might to bring those sheep of His flock who are outside into the fold committed to our charge, consider, however, that the Indians are truly human, and that they are not only capable of understanding the Catholic Faith but, according to our information, they desire exceedingly to receive it...

That one phrase from Graeber is enough for the day.

He's a fscking anthropologist, for the sake of the Holy One Who Is.

Yet as far as the Catholic Church of the sixteenth century is concerned, he doesn't even try to try.

The absence these days of what I regard as high-quality critiques of my writings on the internet poses me a substantial intellectual problem, since I have this space and this feature on my weblog: the DeLong Smackdown Watch. So what should I do with it? Counter-smacking inadequate and erroneous smack downs is, after all, not terribly satisfying. The fun is in absorbing and rethinking issues in response to cogent and interesting critiques.

But there is one task left undone, from April Fool's Day 2013. Then I dealt with chapter 12 of David Graeber's Debt: The First 5000 Years in the manner that that chapter richly deserved to be dealt with. But nobody has taken an equivalent look at the earlier chapters. So, henceforth, now, until and unless my critics step up their game, I'm going to devote the Monday DeLong Smackdown space to a close reading of chapter 11 of David Graeber's Debt: The First Five Thousand Years.

As you may or may not remember, my initial assessment of David Graeber's Debt: The First 5000 Years, gained from skimming the first several chapters, was rather positive:

Economic Anthropology: David Graeber Meets the Noise Machine...: ...and is annoyed at having his summary of anthropological findings dismissed as "nonsensical": David Graeber: On the Invention of Money:

I mentioned that the standard economic accounts of the emergence of money from barter appears to be wildly wrong... this contradicted a position taken by one of the gods of the Austrian pantheon.... Credit and debt comes first, then coinage emerges thousands of years later and then, when you do find 'I'll give you twenty chickens for that cow' type of barter systems, it's usually when there used to be cash markets, but for some reason--as in Russia, for example, in 1998--the currency collapses or disappears." Indeed. It really looks from the anthropologists that Adam Smith was wrong--that we are not animals that like to "truck, barter, and exchange" with strangers but rather gift-exchange pack animals--that we manufacture social solidarity by gift networks, and those who give the most valuable gifts acquire status hereby...

He soon fixed that positive assessment:

David Graeber: Apple Computers is a famous example: it was founded by (mostly Republican) computer engineers who broke from IBM in Silicon Valley in the 1980s, forming little democratic circles of twenty to forty people with their laptops in each other's garages...

And then he gave three contradictory and inconsistent explanations of how he came to write such a sentence demonstrating a previously-unseen total cluelessness about the economy in which he lived: The Very Last David Graeber Post...:

(1) Graeber claimed that it was perfectly true, but not of Apple but of other companies (none of which he has ever named)....

(2) Graeber, when questioned about the Apple passage by Mark Gimein, said that he believed he had been misled by Richard Wolff....

(3) And Graeber claimed that it was his editor/publisher's fault...

Things went downhill from there. And so when I finally got the change to read Graeber's chapter 12, on the post-1971 world, I read it with a jaundiced eye: dozens upon dozens of simple mistakes:

I looked, but could not find anybody masochistic enough give a similarly jaundiced reading to David Graeber's earlier chapters. So we began in on chapter 11. We had noted:

I assure you that I have found some high-quality DeLong smackdowns on the internet, and they are in the pipeline.

Nevertheless, this past week I managed to man-up and read another page of chapter 11 of David Graeber's Debt: The First 5000 Mistakes (The backstory).

I am hoping that there will come a day on which the first new kindle screen from Graeber I read does not have egregious errors of fact or analysis on it.

I pray that there may come such a day.

But today is not that day:

There is only one single error on this kindle screen.