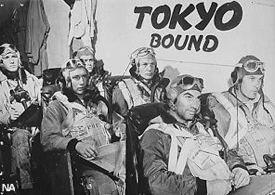 As a night carrier, Enterprise's primary role during the daylight hours was to provide Combat Air Patrol for the Task Force. Night Air Group 90, however, was then at the cutting edge of electronic warfare, and launched several secret missions, as well as dusk and night strikes.

At 0400 February 16, two hours before the other carriers launched their first strikes, Enterprise launched an 'RCM' mission. RCM stood for Radar Counter-Measure, and the single, specially-modified TBM Avenger's mission was to confuse Japanese radar installations, disrupting the enemy's ability to intercept the morning strikes and guess TF 58's intentions.

At dawn, TF 58, just 60 miles off the coast of Honshu, and 120 miles southeast of Tokyo, launched its first fighter sweeps into heavily overcast skies. Concentrating on the airfields around Tokyo, these strikes met little opposition, except for the planes from TG 58.2 (carriers Lexington CV-16 and Hancock CV-19), which encountered approximately 100 Japanese interceptors. As would be the case throughout the raids, the enemy seemed reluctant to tangle too closely with the American fighters. The Hellcats knocked down forty of the enemy planes. Despite Mitscher's urging to focus on teamwork, some inexperienced pilots broke away to pursue the Japanese, leading to greater American losses than were probably necessary.

Worried by the continuing poor weather, Mitscher ordered strikes against airframe and engine plants earlier than scheduled, inflicting heavy damage on two plants northwest of Tokyo. The Big E got back into the action late in the afternoon, launching twelve VF(N)-90 Hellcats at 1615 on a 'zipper' mission against the enemy airfields at Yokosuka. One plane, flown by ENS Frank Luscombe, crashed shortly after takeoff. Luscombe succumbed to his injuries and the cold before a destroyer could pluck him from the water. The remaining eleven planes flew on, intent on 'zipping up' the Japanese airfields, preventing attacks against planes returning from the daytime strikes, and the 116 ships of TF 58.

Skimming over the Chiba Peninsula, the fighters first flew over the air base at Tateyama. Finding no activity there, they continued southwest over Cape Nojima, before turning to the north-northeast and racing straight up Tokyo Bay. Eight minutes later, with the sun low on the horizon, the Hellcats closed on the major air and naval base at Yokosuka, just south of Tokyo itself. Here they encountered heavy anti-aircraft fire, which they endured while attacking the base. While three Hellcats provided air cover (fending off two hesitant enemy planes), the other eight separated into two divisions and dove on the air base.

The first division, led by LT Russell Otis, separated into two sections during the dive, strafing fighters and bombers parked on the north and south ends of the airfield, and destroying a number of planes. The effect was a bit disappointing, however: the Japanese had apparently emptied the planes of fuel and munitions, depriving the VF(N)-90 pilots the satisfaction of inflicting damage beyond that done by their .50-caliber guns.

The second division, led by LT Kenneth Smith and LT Owen Young, strafed and rocketed the airfield, before sweeping out over Tokyo Bay and strafing four freighters, leaving one dead in the water and smoking. Returning eastward over the Chiba Peninsula, the fighters inspected airstrips at Naruto, Katori and Choshi, finding no signs of activity. After strafing a few parked planes at Choshi, the marauding Hellcats turned their guns towards other targets, attacking a radio tower, a radar site, a factory, and three trains.

An hour and fifteen minutes after launching VF(N)-90's zipper mission, the Big E launched a second, secret electronic warfare mission. A TBM Avenger, piloted by LT Charles Henderson and accompanied by a VF(N)-90 Hellcat, stationed itself over the southern end of Tokyo Bay, to monitor and jam Japanese radar. Aside from sheltering TF 58 from radar detection, the mission also succeeded in identifying twenty three separate enemy radar installations, information that would prove of value as Allied units increasingly operated in Japanese waters.

With the exception of ENS Luscombe, all airmen returned safely, though VF(N)-90 pilot ENS Fred Hunziker was forced to ditch near the fleet, and another Hellcat crashed into the barriers while landing on Enterprise.

Enterprise was not done for the night. At 0130 February 17, she launched eleven radar-equipped Avengers, to search for and attack enemy surface units and shipping. Consistent with the defensive role Enterprise filled during this engagement, the Avengers were to ensure that enemy surface units known to be stationed in the Inland Sea did not slip out under cover of darkness, to surprise Mitscher's thin-skinned carriers in the morning. This threat never materialized, however, and the Avenger crews had to be content with attacking airfields on Hachijo Jima and Nii Shima, south of Tokyo Bay. A final, diversionary strike was launched at 0300, which proceeded well south along the Honshu coast, heckling targets and generating misleading radio traffic, again to deceive the Japanese regarding TF 58's intentions.

Before dawn, the Big E recovered her strikes - losing an Avenger and three airmen to an apparent case of vertigo - and resumed flying CAP and anti-submarine patrols. Mitscher's carriers launched fighter sweeps at dawn on the 17th, and attacked three factories near Tokyo, before withdrawing shortly before noon. The thick weather which had protected the fleet during its approach had also hampered its air operations, forcing Mitscher's early withdrawal.

Over 1,000 American carrier planes participated in the strikes, destroying over 500 enemy planes, sinking a number of ships and boats, including the 10,600 ton Yamashiro Maru, and damaging a number of factories and other installations. Losses were unexpectedly high, due largely to the high percentage of inexperienced American airmen: sixty planes were lost in combat, and another 28 forced to ditch or otherwise lost.

Over time, the excitement and anticipation felt by Enterprise's crew before the raid gave way to frustration over what many perceived as the secondary role the Big E and TG 58.5 played in the operation. Summarizing NAG-90's participation, Air Group Commander Bill Martin noted laconically, 'This Air Group was not used to best advantage during this operation.'

Withdrawing with TF 58, Enterprise and Saratoga refueled on February 18, and took up station off Iwo Jima on the afternoon of February 19. At 0645 that morning, Admiral Kelly Turner had ordered the Marines to land; by nightfall, 519 were dead or missing, and 1900 more had been wounded in bitter fighting. For the next eighteen days, the Big E would support the Marines on Iwo Jima. For all but four of those days, she would be the only fleet carrier on station in the Bonins.

As a night carrier, Enterprise's primary role during the daylight hours was to provide Combat Air Patrol for the Task Force. Night Air Group 90, however, was then at the cutting edge of electronic warfare, and launched several secret missions, as well as dusk and night strikes.

At 0400 February 16, two hours before the other carriers launched their first strikes, Enterprise launched an 'RCM' mission. RCM stood for Radar Counter-Measure, and the single, specially-modified TBM Avenger's mission was to confuse Japanese radar installations, disrupting the enemy's ability to intercept the morning strikes and guess TF 58's intentions.