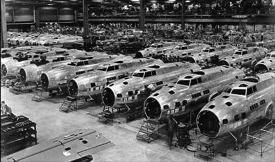 Let's give David the floor:

David Frum: The Real Story of How America Became an Economic Superpower: Reviewing Adam Tooze's Histories of WWI and WWII: "Adam Tooze's... The Wages of Destruction... and The Deluge... READ MOAR

...amount together to a new history of the 20th century: the American century, which according to Tooze began not in 1945 but in 1916.... Yet Tooze's perspective is anything but narrowly American....

Tooze’s portrait of Woodrow Wilson is one of the most arresting novelties of his book. His Wilson is no dreamy idealist. The president’s animating idea was an American exceptionalism of a now-familiar but then-startling kind.... Rather than join the struggle of imperial rivalries, the United States could use its emerging power to suppress those rivalries altogether.... What went wrong?...

the failure of the United States to cooperate with the efforts of the French, British, Germans and the Japanese [leaders of the early 1920s] to stabilize a viable world economy and to establish new institutions of collective security....

Peter Heather, the great British historian of Late Antiquity, explains human catastrophes with a saying of his father’s, a mining engineer:

So it happened in 1929. The Deluge that had inundated the rest of the developed world roared back upon the United States. The Great Depression overturned parliamentary governments throughout Europe and the Americas....

In seeking to explain the urgency of Hitler’s aggression, historians have underestimated his acute awareness of the threat posed to Germany, along with the rest of the European powers, by the emergence of the United States as the dominant global superpower

Tooze writes.... [Hitler] dreamed of conquering Poland, Ukraine, and Russia as a means of gaining the resources to match those of the United States. The vast landscape in between Berlin and Moscow would become Germany’s equivalent of the American west, filled with German homesteaders living comfortably on land and labor appropriated from conquered peoples—a nightmare parody of the American experience with which to challenge American power.

Could this vision have ever been realized? Tooze argues in The Wages of Destruction that Germany had already missed its chance:

In 1870... the populationsUnited States and Germany was roughly equal.... Just before the outbreak of World War I the American economy... [was] roughly twice the size of that of Imperial Germany. By 1943... almost four times....

Germany was a weaker and poorer country in 1939 than it had been in 1914. Compared with Britain, let alone the United States, it lacked the basic elements of modernity... just 486,000 automobiles in Germany in 1932.... Yet this backward land, with an income per capita comparable to contemporary “South Africa, Iran and Tunisia,” wagered on a second world war even more audacious than the first.

The reckless desperation of Hitler’s war provides context for the horrific crimes of his regime. Hitler’s empire could not feed itself, so his invasion plan for the Soviet Union contemplated the death by starvation of 20 to 30 million Soviet urban dwellers after the invaders stole all foodstuffs....

On paper, the Nazi empire of 1942 represented a substantial economic bloc. But pillage and slavery are not workable bases for an industrial economy.... The Hitlerian vision of a united German-led Eurasia equaling the Anglo-American bloc proved a crazed and genocidal fantasy. Tooze’s story ends where our modern era starts.... Yet nothing lasts forever....

America’s... unique economic predominance... is now coming to an end as China does what the Soviet Union and Imperial Germany never could.... When it does, the fundamental basis of world-power politics over the past 100 years will have been removed. Just how big and dangerous a change that will be is the deepest theme of Adam Tooze's profound and brilliant grand narrative.

Adam Tooze does, I think, have the geo-political-economic history of the twentieth century largely right.

And David Frum does gives a very, very nice summary of the major themes that emerge from Tooze's two volumes.

Great Britain, the hyperpower of the 1815-1916 19th century, shaped the globe in the 19th-century in the interest of industrialization, free-trade, and its own imperialist predominance.

The United States, the hyperpower of the 1916-2025 20th century, shaped the globe in the interest of anti-Naziism, anti-imperialism, anti-Communism, free trade, industrialization, and democratization if not democracy--and if its form of anti-imperialism turned into a soft Cold War neoimperalism of its own.

China, the likely hyperpower-to-be of the 21st century, will shape the globe in... what?

But there is another story--one that, I think, Winston Churchill would have stressed and rightly stressed.

In 1846 British Prime Minister Robert Peel accepted the U.S. proposal to draw the border between British Columbia and the Oregon Territory at the 49th Parallel, rather than doing what the British government usually did in the mid-nineteenth century: insist on its own proposal (the Columbia River or the northern boundary of California) and if the counterparty did not agree, send the British navy to burn its capital. This inaugurated an unusual era of... forbearance in geopolitics, coupled with a 70 year cultural wooing of the United States, of which the Rhodes Scholarships are a reminder to this day.

As a result, when 1916 came, Americans perceived Britain as their friend. Americans perceived the British Empire as by and large a force for good in the world. This is in striking contrast to how Britain was perceived in 1850: the cruel corrupt ex-colonial power that had just starved a quarter of all Irishmen to death.

This mattered a lot.

This meant that when Britain got into trouble in the twentieth century--whether with Wilhelm II or Hitler or Stalin and his successors--it had wired aces as its hole cards in the poker game of seven-card stud that is international relations.

The willingness of the United States to send Pershing and his army Over There, to risk war with and then to fight Hitler, and to move U.S. tanks from Ft. Hood, TX, to the Fulda Gap--these were all powerfully motivated by America's affinity with Britain, Britain's geostrategic causes, and Britain's security. Even after Britain was no longer the world's hyperpower, it had banked its hyper power for the future by a very wise use indeed of soft power in the second half of the 19th-century. It had then created a world in which the 20th century's hyperpower would use its muscle to make the world comfortable for Britain to live in.

Is the United States using its soft power now with the same skill and foresight?

Not really--and really not really back in the George W. Bush administration before 9/11, when confrontation with China was the rage.

Alexis de Tocqueville projected before the Civil War that the U.S. and Russia were likely to become twentieth-century superpowers. We project today that at least one of India and China--perhaps both--will become late-twenty first century superpowers. And so we have an interest in building ties of affinity now: it is very important for the late-twenty first century national security of the United States--and the global security of the world--that, fifty years from now, schoolchildren in India and China be taught that America is their friend that did all it could to help them become prosperous and free. It is very important that they not be taught that America wishes that they were still barefoot, powerless, and tyrannized, and has done all it can to keep them so.

This matters a lot.

In the long run we all have an enormous mutual common interest in peace, tolerance, and prosperity. And we have virtually no interest in most of what governments choose to fight about. Who cares today whether the signs in Strasbourg say "Strasbourg" or "Strassburg"? Who today is willing to fight and die to make Vancouver part of the United States of America? Who cares today whether the eighteenth century saw members of the Bourbon or the Habsburg dynasty seated on the throne of Spain?

When diplomats talk about international trade and finance, they talk about them as carrots and sticks: we give people we want to reward access to our markets; we punish people who we want to punish by slapping on trade embargos. "Economic diplomacy" is like bombing, only less so. And arguments that it is much more important to build large and profitable positive-sum games that align interests than to win zero- (or negative!) sum games that lead to the domination of one government's conception of its momentary interest over another's? They blow right past the diplomats, the State Department people as if they were just gentle breezes.

Economists, when they talk about international trade and finance, at least focus on building institutions to allow for mutually-beneficial acts of economic exchange. They talk about diminishing barriers and increasing confidence. They talk about playing positive-sum games with people in other countries that increase wealth, trust, and confidence and that ultimately align interests: the larger is the surplus from international trade and finance, the bigger is that stake that everyone has in continuing the free-trade-and-finance game.

But neither side today focuses on the long-run game of cultural and ideological influence that every temporary hyperpower needs to play: on trying to make it so that the next hyperpower seeks to create a prosperous, free, and peaceful world for the ex-hyperpower to be comfortable in.

Let's give David the floor:

David Frum: The Real Story of How America Became an Economic Superpower: Reviewing Adam Tooze's Histories of WWI and WWII: "Adam Tooze's... The Wages of Destruction... and The Deluge... READ MOAR