Discussion of Matthew Rognlie: "Deciphering the Fall and Rise in the Net Capital Share" 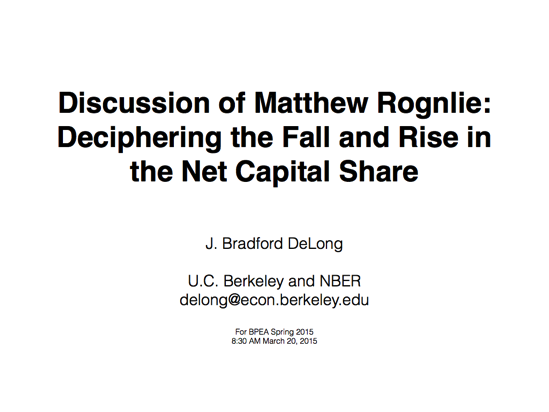 Let me thank Matt for doing some very serious and thoughtful digging. The upshot is that I am in an ideal position for a discussant: There are very interesting and important numbers here. These numbers have not been put together in this way before. There is here an author who is wise enough not to believe he has nailed what the numbers mean to the floor. READ MOAR

Thus I am in an excellent position, if not to add intellectual value, at least to share lavishly in intellectual rents. 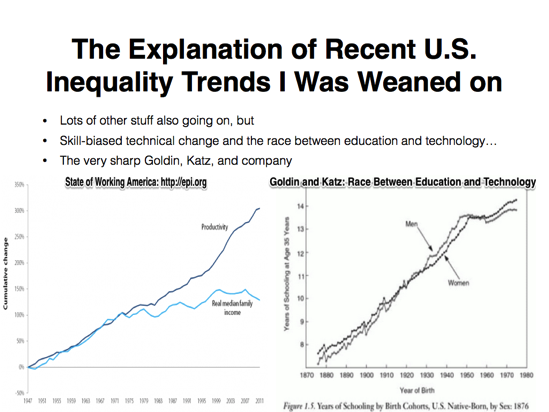 I was weaned on the explanation of recent trends in US inequality set out by the very sharp Claudia Goldin, Larry Katz, and company. US inequality trends were driven by the interaction of skilled-biased technical change with the end of the era, that had begun in 1636, in which we made increasing educational levels a priority. That combination greatly raised the return to education-based skills. And that was the principal driver of rising income inequality. 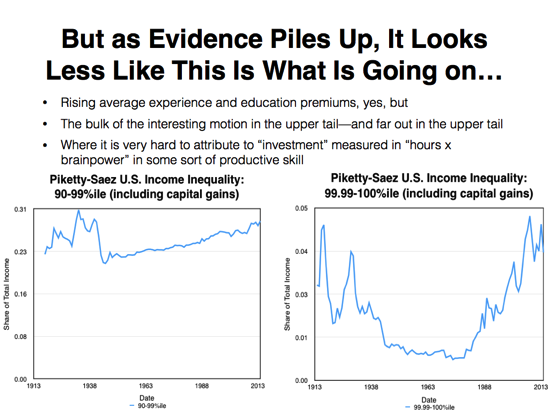 But, recently, reality does not seem to agree.

To get large swings in the income distribution out of small changes in the relative supply of educated workers would seem to require unreasonably small substitutability between formal college and other factors of production. We have seen higher experience-skill premiums and sharply higher education-skill premiums. But the real action seems to be far, far out in the upper tail. 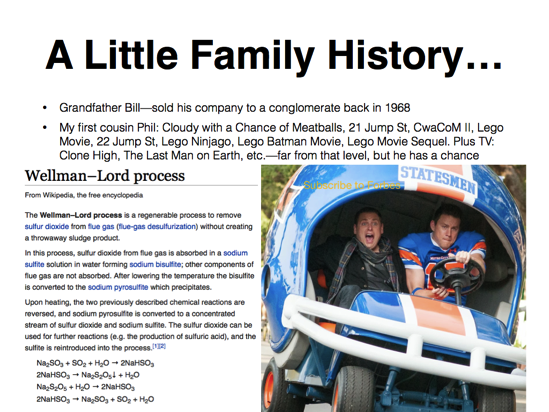 Let me provide a little family history: My Grandfather Bill was in not just the 1% or the 0.1%, but in the 0.01% back in the days before the rise in inequality. He sold his Wellman-Lord chemical-factory construction company to the IMC conglomerate back in 1968.

One of his other grandsons, my first cousin Phil Lord, might have a chance of making it into the same financial range--The LEGO movie and its many sequels are only one of his franchises. But his odds are slim, for he needs to make the transition from co-director to "producer" and "created by" credits. However, even if he does attain the same real wealth level, he will still be breathing much less-rarified relative air. 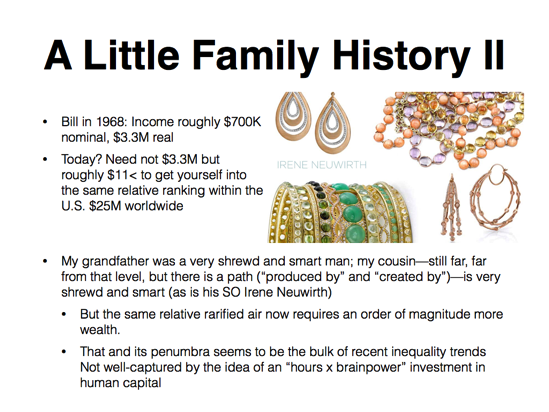 It is simply not possible for me to see such an extreme concentration of benefits as in any way a return to a factor of production obtained as the product of "hours spent studying" times "brainpower".

So what is going on? Thomas Piketty has a guess.

Piketty guesses that the real explanation is that 1914-1980 is the anomaly. Without great political disturbances, wealth accumulates, concentrates, and dominates. What about what John Maynard Keynes called the “euthanasia of the rentier”? As accumulation proceeds the relative fall in the rate of profit exceeding the relative rise in concentrated wealth? Piketty points to remarkable constancy in the rate of profit at between 4% and 5% per year, but is agnostic as to whether the cause is easy capital-labor substitution, rent-seeking by the rich, or social structure that sets that as the "fair" rate of profit.

And this is why it is truly excellent that Matt Rognlie brings well-ordered and insightfully-organized data to these questions. 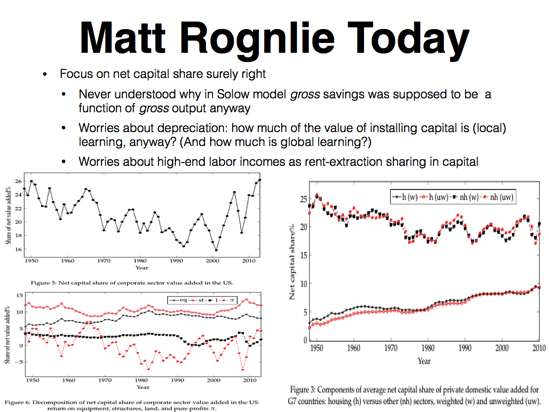 Matt's focus on the net capital share is surely right.

I never understood why, in the Solow model, gross savings was supposed to be a function of gross output anyway. There are the big worries over the data.1 Let me skip those.

As Matt stressed, the big news in the post-World War II net capital share is the surge in housing: from 3% to 8% of private domestic value added. 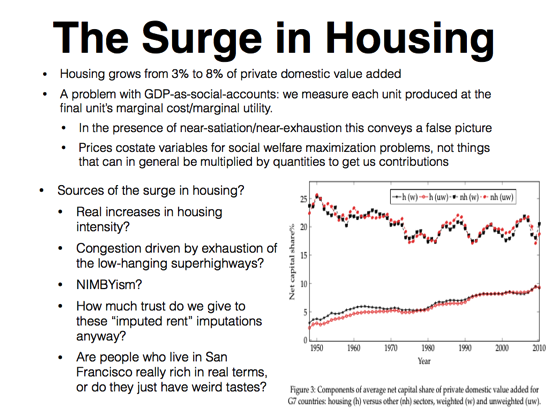 How much of this is a real increase in housing intensity? How much reflects congestion driven by exhaustion of the low-hanging superhighways? How much is rent-extraction via NIMBYism? How much trust do we give to these “imputed rent” imputations anyway?

And what hat does this mean, anyway?

There has always been a problem with using our GDP estimates as social accounts. In GDP, we measure each unit's contribution to production at the final unit’s marginal cost and each unit's contribution to societal well-being at the final unit's money-metric marginal utility. In the presence of anything like near-satiation in consumption, or of near-exhaustion in productive capacity, this does not convey a true picture. 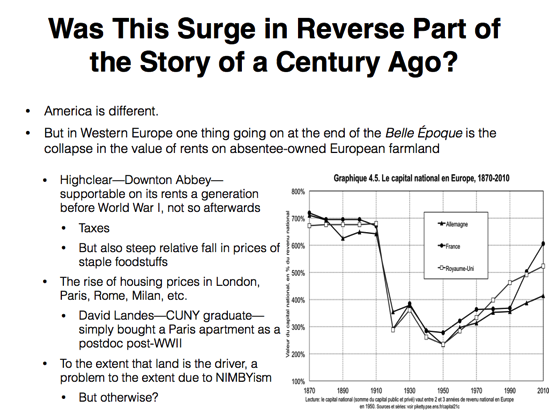 The fact that the big news since World War II is a rise in housing as a share of value added raises the question of whether this surge may be in significant part the reversal of story from a century ago--now the rise of valuable urban housing, then the decline of valuable Western European rural farmland.2 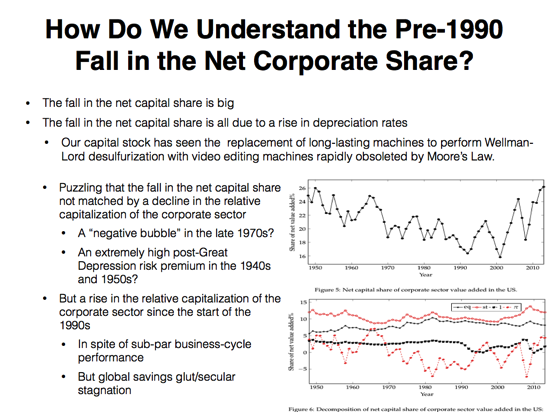 And as Matt also stressed, the secondary big news in his numbers is the pre-1990 fall in the net capital share, a fall driven by a very real rise in depreciation is real. Our capital stock has seen the replacement of long-lasting machines to perform Wellman-Lord desulfurization reactions with video editing machines rapidly obsoleted by Moore’s Law.

But it is puzzling that the pre-1990 fall in the net capital share not matched by a decline in the relative capitalization of the corporate sector. Matt points out a steady rise in capitalization up to the late 1960s, followed in the 1970s by a “negative bubble”--truly absurdly high earnings yields on equities--that lasts well into the 1980s. Then we see a bubbly rise in the relative capitalization of the corporate sector since the start of the 1990s--a rise that persists in spite of sub-par business-cycle performance. Very puzzling. 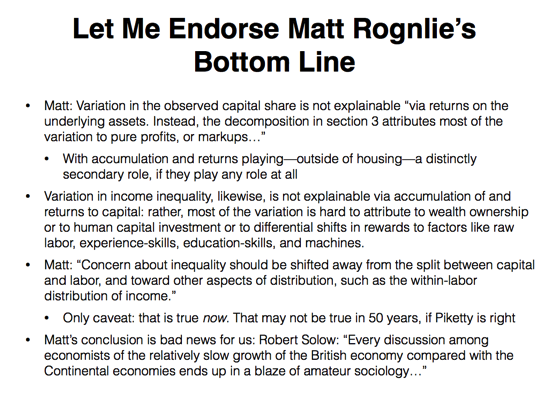 Let me end by strongly endorsing what I take to be Matt Rognlie’s bottom line. I take it to be that post-WWII variation in the observed net capital share is not explainable

via returns on the underlying assets. Instead, the decomposition in section 3 attributes most of the variation to pure profits, or markups…

Accumulation and returns play, outside of housing, a distinctly secondary role, if they play any role at all. But it is equally hard to find any role for the race between education and technology, and there should be if we think the factors of production are labor, education skills, and machines.

Likewise, variation in income inequality, is hard to attribute to wealth ownership or to human capital investment or to differential shifts in rewards to factors like raw labor, experience-skills, education-skills, and machines. Matt thus concludes that:

Concern about inequality should be shifted away from the split between capital and labor, and toward other aspects of distribution, such as the within-labor distribution of income.

The nly caveat I wish to make is: This is true now. This may not be true in 50 years, if Piketty is right

And Matt’s conclusion is bad news for us economists, for it leaves us in the same position as those trying to explain an earlier large puzzle in the production function, the twentieth-century retardation of the British economy.

It was Robert Solow who said:

I really would like for us to be able to do better.

[2] In America things are different: the frontier. But in Western Europe one thing going on at the end of the Belle Époque is the collapse in the value of rents on absentee-owned European farmland.

Downton Abbey--Highclear--was supportable on its entailed rents a generation before World War I. It was not so afterwards. Some of this was taxes. But there was also a steep relative fall in prices of staple foodstuffs. Not just Iowa and Kansas, but Odessa and New Zealand came online.

Western European farmland lost its value as a factor of production at the end of the nineteenth century. To what extent was that it? And to what extent is "it now the rise of housing prices in London, Paris, Rome, Milan, etc.? My teacher the late David Landes, a CUNY graduate, simply bought a Paris apartment as a postdoc post-WWII. Those of our postdocs who could not afford to go to private colleges do not pick up Paris apartments casually in the course of a research trip to take a look at bank records.

Discussion of Matthew Rognlie: "Deciphering the Fall and Rise in the Net Capital Share"

Let me thank Matt for doing some very serious and thoughtful digging. The upshot is that I am in an ideal position for a discussant: There are very interesting and important numbers here. These numbers have not been put together in this way before. There is here an author who is wise enough not to believe he has nailed what the numbers mean to the floor. READ MOAR