Lots to Worry About in Climate Change

Over at Medium: I have a different take on Asness and Brown than Mark Buchanan does — largely because I take Asness and Brown’s claim to be just doing “climate-knowledge-free statistics” to be made in bad-faith.

I take their paper to be an episode of a weird and perverse rhetorical game that has now come to be called “Sealioning”. READ MOAR

“Sealioning” is a term coined by David Malki of Wondermark to be applied to those pretending to be simply interested merely in having an objective and rational discussion of “the facts” while actually attempting to strengthen a side of a public argument that one does not dare explicitly defend. 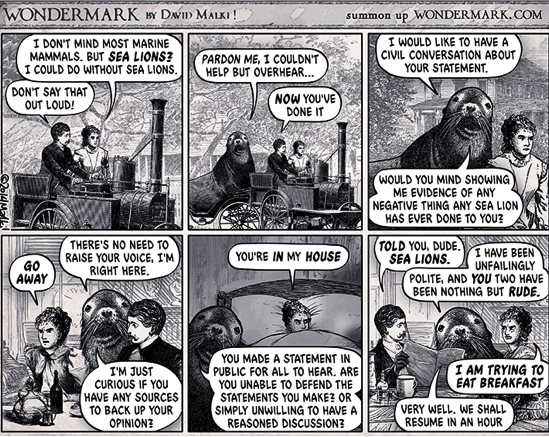 If Asness and Brown were, say, in the “climate-knowledge-free statistics” game — as they claim they are — they would not have taken the temperature record since 1880:

simply fit a linear time trend to the whole thing:

projected that time trend out to the end of the twenty-first century:

and then professed surprise that that projected time trend was well below IPCC global warming projections. Suppose that they were not engaged in Sealioning. Suppose that they had wanted to undertake the exercise of engaging in a real “climate-knowlege-free statistics” projection. A real “climate-knowledge-free statistics” projection would have started with human greenhouse-gas emissions as the supposed driver of global warming: 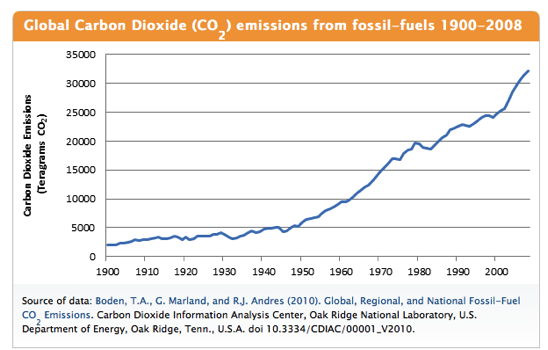 Moreover, as the world industrializes, under business-as-usual emissions will not stay constant but rather increase. A real “climate-knowledge-free statistics” projection would have global carbon emissions not at their current level of three times but at five times the twentieth century average. If we multiply the average twentieth-century trend by five, we get a “climate-knowledge-free statistics” projection like so:

If Asness and Brown had done that — had done a real “climate-knowledge-free statistics” projection, they would then not have written anything like what they did write, viz.:

The IPCC projections could certainly turn out to be correct, but there’s little sign of that in the data (admittedly, again, data analysis, not climate science, is what we do). Instead, they would have written: “that the globe warmed at the rate of 0.67C per century makes us think that with five times twentieth-century emissions projected for the twenty-first century IPCC projections are very reasonable, for 0.67C x 5 = 3.33C — well within the range of IPCC’s forecasts.”

They are predicting a sharp increase in the rate of warming that has not yet been observed.

Other evidence for warming, such as decline in Arctic sea ice from 1980 to 2012 or sea level increases since the early 1900s, if measured accurately, could easily be consequences of the moderate degree of actual warming we have already observed, not evidence that the rate of warming is about to make a dramatic increase. While we aren’t climate scientists we are reasonably confident that ice melts from actual warming not future forecasted warming, whether forecasted accurately or not…. It is certainly not new evidence independent of the 0.67° Celsius per century warming trend…. When you see a picture of a polar bear stranded on a tiny piece of rapidly melting ice, it may indeed be a consequence of the 0.67° per century warming we’ve seen, and it may indeed be a serious problem, but it can’t be the consequence of, or the proof of, a model for the future, as forecasts of the future have, as of now, not harmed any polar bears…

Instead, they would have written: “Since 0.67C of warming has had significant effects on global features like the Arctic ice cap, there is every reason to worry about the destabilizing effects on natural systems that we humans depend on of the roughly fivefold greater warming projected for the twenty-first century.”

If Asness and Brown had actually been engaged in climate-knowledge-free statistics, somewhere in their paper there should be a sentence like: “Since it looks like the twenty-first century will see five times the emissions of the twentieth, we expect five times the warming.”

It is the absence of that sentence that leads me to classify it as bad-faith Sealioning.

I suggest that they please go away.

I wish that they would leave the global-warming debate to people who are not trying to play some kind of weird and perverse rhetorical game with us.

Lots to Worry About in Climate Change

Over at Medium: I have a different take on Asness and Brown than Mark Buchanan does — largely because I take Asness and Brown’s claim to be just doing “climate-knowledge-free statistics” to be made in bad-faith.

I take their paper to be an episode of a weird and perverse rhetorical game that has now come to be called “Sealioning”. READ MOAR