Over at Project Syndicate: The Monetarist Mistake 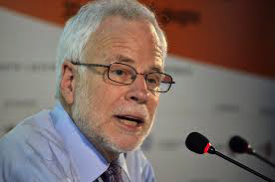 Over at Project Syndicate: The Monetarist Mistake:

Two months ago here, I briefly noted that I had found the best explanation for why the collective economic policymakers of the North Atlantic have left and continue to leave the job of fighting and guiding recovery from our Lesser Depression at most half-done. The best explanation is to be found in my friend, teacher, and patron, Barry Eichengreen’s Hall of Mirrors.

But I have short shrift to both the argument of the book, and to its praise. It is the best book on 2008-present that has yet been written. And Eichengreen’s book’s central argument deserves to be the centerpiece of a much larger discussion. READ MOAR

So let me try to launch one piece of that discussion today:

Hall of Mirrors traces our tepid and inadequate response to the crisis in 2007-2009 to the triumph of monetarism. In the 1960s and 1970s monetarist economists advanced their particular economyc-historical interpretation of the causes of the 1930s Great Depression. And the sometime disciples of Milton Friedman overwhelmed their Keynesian and Minskyite peers.

The Great Depression, Friedman and his co-author Anna Jacobson Schwartz had argued in their 1963 Monetary History of the United States, was a failure of government. It was due solely and completely to the failure of the 1929-1933 Federal Reserve to properly and aggressively expand the monetary base in order to keep the economy’s money stock on a stable growth path. No decline in the money stock, no Great Depression. The government's failure to follow a "neutral" monetary policy--the active disturbance by government incompetence of what was by nature a stable full-employment market economy--was the only reason for the Great Depression.

This interpretation made a certain kind of coherent sense. However, it could be sustained the so-called velocity of money, the speed with which people spent the cash in their pockets and the demand deposits in their banking accounts, varied little with changes in interest rates. And it involved some fast talk and fast dancing as to what a "neutral" monetary policy was.

But suppose the velocity of money was interest-elastic. Then the open-market operations undertaken to expand the money supply would have pushed down interest rates. They would so cause a further fall in monetary velocity. And so that would have made Freedman and Schwartz’s cure impotent.

And, it turned out, what Friedman and Schwartz called a "neutral" monetary policy in the Great Depression would have required that the Federal Reserve flood the zone with liquidity and buy bonds and print cash at a rate never before imagined.

If money demand were, contrary to what Friedman and Schwartz supposed, highly interest-elastic, then to have successfully stopped the Great Depression in its tracks would have required Keynesian expansionary fiscal and Minskyite supportive credit-market policies. And the argument that a "neutral" monetary policy is government hands-off as opposed to activist Keynesian fiscal and Minskyite credit policies was never fully credible.

The monetarists won the economic-historical and ma beat in the 1960s and 1970s. Peter Temin's Did Monetary Forces Cause the Great Depression pointed out convincingly that there was no surprise in anything the Federal Reserve did--no place where interest rates jumped up as it deviated from what people were expecting--and at most minor and irregular downward pressure on liquidity. But that didn't matter. Why not? Because the debate wa really two debates:

At one level, the debate between monetarists, Keynesians, and Minskyites was a simple empirical matter of reading the evidence: Was the interest-elasticity of money demand in a serious downturn low, as Milton Friedman claimed, or high, as in John Maynard Keynes’s and John Hicks’s liquidity trap? Were financial markets a near-veil because the money stock was a near-sufficient statistic for predicting total spending, as Milton Friedman claimed, or was the credit channel and its functioning of decisive importance, as Minsky warned?

At the second level, however, the debate was over whether market failure or government failure was the bigger threat. The Great Depression had, before Friedman and Schwartz's Monetary History, been seen as an unanswerable argument that market failure was potentially so dire as to require the government to take over direction of the whole economy. And that created a presumption that there might be other, smaller market failure might require a government to be interventionist indeed not just in macro but in micro as well. But if the Great Depression could be understood as a failure of government, then the cognitive dissonance between its reality and right-of-center economists' presumption that government failure was always the bigger threat could be erased.

Of course, the textbook Friedmanite cure was tried á outrance over 2008-2010 and proved insufficient. That is decisive evidence that Friedman and his monetarists were wrong about the Great Depression as well. There are thus no people today who have properly done their homework who would say, as Ben Bernanke said to Milton Friedman and Anna Schwartz in 2002:

You're right, we did it. We're very sorry. But thanks to you, we won't do it again.

But, even in the 1970s, the empirical evidence did not weigh strongly enough on the monetarist side to account for its decisive victory.

The completeness of the victory must, I think be attributed to the fact that political economy is always polluted by politics: so polluted that, as John Stuart Mill lamented back in the 1800s, there is no position so absurd that it has not been advanced by some political economist of note and reputation, and I would add because it is convenient to their intellectual-political commitments.

To admit that the monetarist cure was inadequate would be to admit that the Great Depression had deeper roots then a failure of technocratic management on the part of central banks charged with maintaining a neutral monetary policy and a stable money supply growth rate. Such deeper roots in severe market failures would not be consistent with a belief that social democracy had been oversold, and that government failure was almost invariably a worse danger than market failure. There was thus an extremely strong elective affinity between a mainstream economics profession caught up in the gathering neoliberal currents of the age and the Friedmanite interpretation of the Great Depression.

It was the completeness of the victory that made policymakers in 2008-2010 unwilling to apply the Keynesian and Minskyite cures to severe downturns enthusiastically enough and on a large enough scale to adequately deal with the problems that emerged.

And so when 2008 came, the economists advising the North Atlantic’s governments and central banks were not ready.

Over at Project Syndicate: The Monetarist Mistake

Over at Project Syndicate: The Monetarist Mistake:

Two months ago here, I briefly noted that I had found the best explanation for why the collective economic policymakers of the North Atlantic have left and continue to leave the job of fighting and guiding recovery from our Lesser Depression at most half-done. The best explanation is to be found in my friend, teacher, and patron, Barry Eichengreen’s Hall of Mirrors.

But I have short shrift to both the argument of the book, and to its praise. It is the best book on 2008-present that has yet been written. And Eichengreen’s book’s central argument deserves to be the centerpiece of a much larger discussion. READ MOAR