Why Is David Brooks So Opposed to Thinking About Policies for Equitable Growth?: Focus 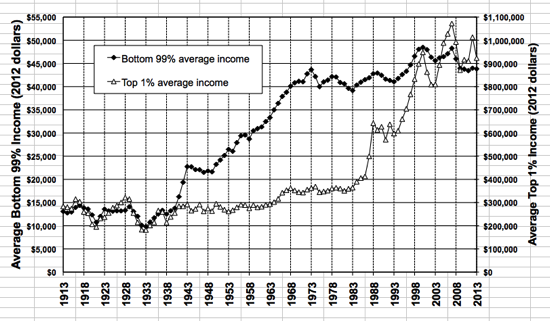 Over at Equitable Growth: The extremely estimable (but unfortunately ill: we very much hope that he and his doctors and nurses restore him to his normal superb weblogging and life-enjoying form quickly) Kevin Drum flags what he (correctly) calls "a bit of an odd column today"(http://www.motherjones.com/kevin-drum/2015/03/yes-education-matters-its-not-answer-growing-income-inequality) from David Brooks.

I cannot be the only one to find that David Brooks's failure to either type links into his pieces nor find it worthwhile to refer to those he is criticizing by name makes his columns hard to decode.

But I think today it is worth the effort. [READ MOAR]

Let us start with:

David Brooks: The Temptation of Hillary: "For many years, Democratic efforts to reduce inequality and lift middle-class wages...

...were based on the theory that the key is to improve the skills of workers. Expand early education. Make college cheaper. Invest in worker training. Above all, increase the productivity of workers so they can compete. But a growing number of populist progressives have been arguing that inequality is not mainly about education levels. They argue that trying to lift wages by improving skills is an ‘evasion.’ It’s ‘whistling past the graveyard’...

Who are these "populist progressives"?

Well, they are, among others, Lawrence H. Summers:

Lawrence Summers: The Future of Work: "Whether you think it is due to technology or to globalization or to the mal-distribution of political power...

...something very serious is happening in our society.... I think the [education] policies that Aneesh is talking about are largely whistling past the graveyard. The core problem is that there aren’t enough jobs. If you help some people, you could help them get the jobs, but then someone else won’t get the jobs. Unless you’re doing things that have things that are effecting the demand for jobs, you’re helping people win a race to get a finite number of jobs...

It is the "whistling past the graveyard" that is the flag.

The real problem, some of them say, is concentrated political power.... Others say the problem is stagnation... the private economy isn’t generating jobs. Or it’s about corporate power.... People in this camp point out that inflation-adjusted wages for college grads have been flat for the past 14 years. Education apparently hasn’t lifted wages. The implication? Don’t focus on education for the bottom 99 percent. Focus on spreading wealth from the top. Don’t put human capital first. Put redistribution first...

Lawrence Summers and Ed Balls: Report of the Commission on Inclusive Prosperity: "Many kinds of public investment--including spending on public transportation, water, power, education, and research and development--have positive social rates of return when executed well... and such investments may even pay for themselves....

...Expand educational opportunity to increase human capital and support economic mobility: Supporting early childhood education: ...Evaluations of high-quality preschool programs in Boston, Massachusetts, and Tulsa, Oklahoma, for example, showed that children gained an additional year of learning in language, reading, and math. These gains in the early years go on to positively affect everything from high school graduation rates to lifetime earnings... make the most profound difference in the lives of low-income children and children of color....

Eliminating financial barriers to higher education: As recently as 1996, the United States had the second highest share of adults who earned postsecondary education credentials and the highest share of adults with university degrees.... The United States is also showing more-pronounced downward educational mobility. Twenty-nine percent of American men and 17 percent of American women had less education than their parents, compared with the OECD average of 19 percent for men and 13 percent for women.... We should make higher education virtually free at a community college or a public four-year college so that all high school graduates and their families have no doubt that they can afford higher education....

There is a clear need to develop and expand the skills of workers who do not go to university.... Apprenticeship is good example of skills training that has worked in many advanced economies.... Switzerland, Germany, and Austria have long-established apprenticeship systems that are renowned for their high quality. A majority of young people from these three countries enter the workforce through apprenticeships, which are available across a wide range of sectors and occupations...

Does that sound like: "Don’t focus on education for the bottom 99 percent. Focus on spreading wealth from the top. Don’t put human capital first. Put redistribution first..." to you?

Over the past few months a stream... have moved from the human capital emphasis to the redistributionist emphasis. (It’s a matter of emphasis, not strictly either/or)...

But then re-reverses and says not that the need for redistribution is overemphasized but rather that it is "wrong":

Unfortunately, this rising theory is wrong on substance and damaging in its effects....

And Brooks then proceeds to make a remarkable statement:

Since 2000, the real incomes of the top 1 percent have declined slightly. If you limited your view to just those years, you’d conclude that there is no inequality problem, which is clearly not true...

He is looking at the white-triangles line in this graph from Piketty and Saez--a graph he does not link to, and which he does not cite:

Brooks does not remind his readers that the year-2000 was a boom year, in which capital gains realizations boosted the incomes of the financial sector and of the superrich in general above their trend, while 2013 was not. A global warming denier might look at the white-triangles line and say that there is a sense in which the rich today have lower incomes and are less well-off than the rich of 2000. Nobody else would.

And, indeed, if Brooks had printed that graph alongside his column, he would have exploded his thesis sky high--for the trend of the income of the top 1% since 2000 has not been a slight decline but a rise.

I find it... distressing and disturbing... that Brooks refers to this graph without providing his readers with a link to it.

I find something else more disturbing: Only somebody who knew that starting in 2000 misrepresented current trends would even think to start in 2000--rather than in 2003, for the past ten years of data, or 1995 or 2001 or 2004, to compare mid-business cycle observations. Only somebody really up on the data would know that the just-released 2013 Piketty-Saez estimate is lower than the 2000 number. This is not a calculation that you would think to make and report unless you already knew that it tended to produce a distorted impression in your readers.

Makes it damned difficult to have a good faith, substantive policy dialogue.

The redistributionists seem to believe that modern capitalism is fundamentally broken. That growth has permanently stagnated. That productivity should no longer be the focus because it doesn’t lead to shared prosperity. But their view is biased by temporary evidence from the recession. Right now, jobs are being created, wages are showing signs of life. Those who get more skills earn more money. Today’s economy has challenges, but the traditional rules still apply. Increasing worker productivity is the key. Increasing incentives to risk and invest is essential. Shifting people into low-productivity government jobs is not the answer.

It’s clear why Clinton might want to talk redistribution. On substantive policy grounds, it would be destructive to do so. And, in the general election, voters respond to the uplifting and the unifying, not the combative and divisive.

As somebody who works for a think tank called the Washington Center for Equitable Growth, let me say that what we--and every single other "populist progressive" I can see right now, including Lawrence H. Summers--want is equitable growth. That has two parts: The first is equitable--which involves distributing the fruits of the economy less unfairly than the past generation's trends have led them to be distributed. The second is growth--in which education has, as Larry and Ed point out at exhaustive length, a major role to play.

Brooks is, I think, playing a particular rhetorical game here.

Now at some level he knows that this is not really true. We know that from the absence of quotes downplaying education from really existing "populist progressives". We know that from the parenthetical half-backtrack of "(It’s a matter of emphasis, not strictly either/or)". I, at least, sense a little uneasiness here--as if Brooks knows that he has gone over the line.

This is, however, another weight pointlessly added to our burden.

There will now be New York Times readers roaming the earth who have read David Brooks in good faith, and who will repeat sound bites like "the top 1% today are poorer than they were in 2000!" and "Hillary Rodham Clinton's political advisors are opposed to spending more money on American education!"

This makes it harder for those of us who are trying to carry on a substantive policy dialogue to actually do so.

And let me give the last word to Kevin Drum, who--more politely--is as dismayed as I am at the unhelpfulness of this contribution by Brooks:

I don't quite get who Brooks is arguing against here. Larry Summers... has been clear that he thinks education is important, both individually and for the economy as a whole... just doesn't think... [it] likely to have much impact on growing income inequality.... Brooks never even pretends to address this. I don't think there are any prominent Democrats arguing that education isn't important. Pretty much all of them are on board with good early-childhood education and better community colleges... [to] help individuals and make the American economy stronger. But will it rein in growing income inequality? As long as inequality is driven primarily by the gains of the top 1 percent--which it is--then it won't. To address that particular problem, we have to look elsewhere.

Why Is David Brooks So Opposed to Thinking About Policies for Equitable Growth?: Focus

Over at Equitable Growth: The extremely estimable (but unfortunately ill: we very much hope that he and his doctors and nurses restore him to his normal superb weblogging and life-enjoying form quickly) Kevin Drum flags what he (correctly) calls "a bit of an odd column today"(http://www.motherjones.com/kevin-drum/2015/03/yes-education-matters-its-not-answer-growing-income-inequality) from David Brooks.

I cannot be the only one to find that David Brooks's failure to either type links into his pieces nor find it worthwhile to refer to those he is criticizing by name makes his columns hard to decode.

But I think today it is worth the effort. [READ MOAR]